According to RedFin, single-family,

“Luxury-home purchases plummet 28% [year over year], the biggest drop on record.” High-end-house hunters are getting sticker shock when they see the impact of rising mortgage rates on paper. For a luxury buyer, a higher interest rate can equate to a monthly housing bill that’s thousands of dollars more expensive. Someone who was in the market for a $1.5 million home last year may now have a maximum budget of $800,000 thanks to higher mortgage rates. Luxury goods are often the first thing to get cut when uncertain times force people to reexamine their finances.”

The biggest declines were all in the top 50 metropolitan areas across the country. The worst markets were, 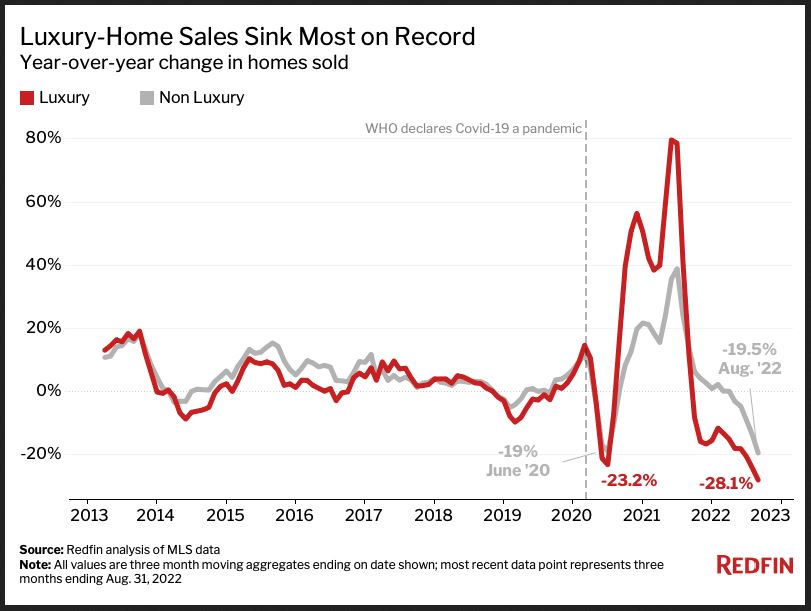 However, most people (other than realtors) haven’t noticed this and so are not planning accordingly. Because even though sales are falling rapidly, the asking prices of single-family homes are not falling as rapidly. But this is only a temporary illusion that happens just before prices start to fall. That is typically followed by a buyer's strike because people believe if they wait the prices will fall even further (and probably will through 2023).

The data is saying that even so-called wealthy people (a $1.5 million home is the average price for a home in cities like San Francisco) are less able to buy homes at their asking price. Put another way, only the wealthiest people in the top 1/10th percent are still buying higher-priced homes in California metropolitan areas (and probably for all cash).

Meanwhile, the worst thing about this is that when more people across all price ranges (the average working family was priced out of the housing market years ago) can no longer afford to buy homes they become renters, which continues to put upward pressure on rents. Unfortunately, the Federal Reserve only looks at rental rates in calculating inflation, so they will continue to think the housing market is “hot,” even when it’s definitely not.

As the Fed continues to aggressively jack up interest rates, businesses have a harder time securing the credit they need to invest in their operations and increase productivity in order to decrease costs. This is particularly true in the housing development business, which is heavily dependent upon short and long-term lending rates. But what the Fed is completely ignoring is that increasing productivity is the number one way to decrease inflation. So, ironically, the Fed's single-minded obsession with fighting inflation is actually increasing operating costs, decreasing productivity, and increasing inflation.

All this at a time when buyers are increasingly strapped for cash and less able to qualify for home loans. It's likely the slide in housing prices has only just begun.

Equally unfortunate is that the Federal Reserve thinks that because "official" unemployment is very low, everyone is doing just fine and the consumer is in “great shape.” However, this fails to account for the fact that a large number of people left the workforce during Covid and are never coming back: many retired early and many just fell off the government's antiquated, statistical radar. But there's something even more important at work here that the Fed is missing: the assumption that the government's unemployment numbers are a valid indicator of the health of the workforce.

The measure of "unemployment" is dependent on the number of people filing for benefits. But the world has changed. We are not reliving the 1970s. A much larger percentage of our population is now in the "multiple side hustle" economy that includes self-employed service providers, digital nomads, gig workers, and an increasingly large number of workers who do not qualify to apply for unemployment benefits when they are temporarily out of work. None of these are counted by the government's methods.

And, finally, we also have to consider that in times like these (all the media nonsense about "quiet quitting" aside), official unemployment statistics may stay low because most people working in traditional jobs need their job to survive the inflation we’re experiencing.

The Fed governors might want to remember that when the Soviet Union collapsed, the unemployment rate was essentially zero. Everyone, technically, had a job but it wasn’t paying them enough to survive.