Marin Clean Energy (MCE) has a problem. They need to cut prices. MCE expects PG&E's prices to decline soon, so they will be equal or below MCE's. Further, exit fees that PG&E charges to cover stranded energy contract costs when Community Choice Aggregators (CCAs) switch consumers into their programs are an added cost for MCE ratepayers and those fees are slated to increase twice this year.

Basically, everything is moving in the wrong direction for MCE and likely for you as well if you are an MCE customer.

Meanwhile, our economic downtrend threatens the viability of upstart CCAs, including longer-operating MCE.

CCAs are expanding to new geographic areas in a money grab for ratepayer revenue. MCE is one of the most aggressive CCAs, expanding to four counties, and is responding to its new economics by using Solano County ratepayers as guinea pigs for experimental "dynamic" pricing. It appears that MCE hopes changing-prices will keep consumers off balance, confused, and thereby enrolled in their program.

So, MCE and its leader Dawn Weisz have a financial proposition for you. They want you to invest your nest egg funds in MCE “Prepayment” Bonds so MCE can pay off energy suppliers and negotiate discounts in order to offer its ratepayers lower electricity prices. MCE says your income is tax-free.

What are prepayment bonds?

As explained by Norton Rose Fulbright, an energy sector financial structuring firm, a prepayment bond is defined as an instrument that funds a prepaid energy deal (gas or electric),

"...a structured transaction in which one or more municipal utilities, through a special-purpose entity often called a “joint-action agency,” use proceeds from the sale of tax-exempt bonds to prepay for a supply of gas that will be delivered over a long period, such as 15 years.

"The joint action agency that issues the bonds uses the proceeds to buy the prepaid energy and then resells it to the municipal utilities that participated in forming the joint action agency. Structured finance transactions fell out of favor after Enron collapsed. Interest in prepaid deals cooled. However, since the Energy Policy Act passed in August 2005, the deals have been making a comeback."

Regarding the terms of a typical prepayment bond offering, again from Norton Rose Fulbright,

"The collateral is usually limited to the transaction contracts, the revenues the municipal issuer will [supposedly] earn from resale of the gas to its member utilities, and various reserve accounts established under the bond indenture.

"The tax-exempt nature of the bonds is key to the transaction."

In other words, the selling point is tax exempt returns.

The "non-recourse" nature of this indebtedness is probably something MCE won't be marketing in a big way, when they float these bonds. It's mentioned by MCE Director of Finance & Treasurer, Garth Salisbury, in a May 21, 2020 memo to the MCE Board, but the consequences (and disclosures) to the bondholders are not discussed.

The bottom line is that if you were to purchase an MCE Prepayment Bond and MCE, a Joint Powers Authority (JPA) agency, were to default on its payment obligations, MCE would walk away scot-free while you get to take a haircut (or a buzz cut) -- you and your attorney will be working directly with MCE’s energy suppliers to attempt to get your money back. You will be in what's called a "collateral position" via a lien.

In other words, when the jig is up, you will be working directly with the power producer trying to get the energy to market, while little ole MCE and its insulated JPA members (San Rafael, Pittsburg, Napa, Walnut Creek, etc) will be off the hook.

It's part and parcel for an agency that operates as a paper shuffling commodity house that off-loads its obligations and shifts responsibility onto others.

Basically, everyone involved in MCE will say they're sorry if things go south and you get screwed. 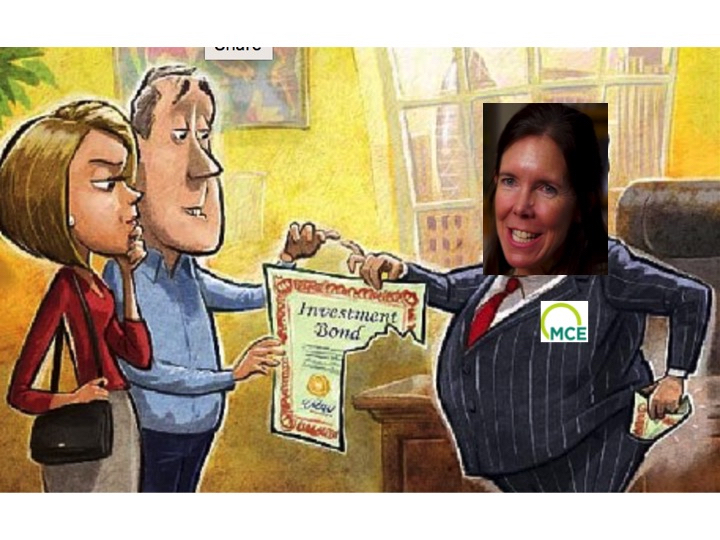 And good luck getting what is now "your" energy to market for cash if MCE defaults. PG&E will technically be in the position of “provider of last resort,” as required by state regulators. PG&E will be responsible for holding the electric market together and its scheduling coordinator will control energy generation and resource flow.

In other words, get in line.

Meanwhile, mom & pop and their solar farm will be sitting in the weeds.

So, would you buy MCE's (tax-free) bonds? MCE hopes so.

Jim Phelps is a consumer advocate, specializing in energy issues and CCAs. Before retiring he was a power contractor and utility rate analyst. He consults municipalities who are considering the merits of CCA and the accrued effects on municipal Climate Action Plans. He served as a contributor to the California Energy Commission's AB 1110 Implementation Rulemaking.