Late on the night of Monday May 18th, at about 10:15pm with almost no one in Terra Linda aware, city council repeated what occurred in 2009 where a resolution was passed on a major planning designation to accelerate rapid development in Terra Linda without sufficient community engagement.

The San Rafael City Council voted unanimously, 5-0, to submit a letter of intent designating Northgate a Priority Development Area. The discussion can be viewed on video starting around 2h 50m - 3h 10m during the May 18th council meeting: https://www.cityofsanrafael.org/meetings/city-council-may-18-2020/#/tab-video

PDA DECISION MADE YET AGAIN WITHOUT OUTREACH

This is a major decision for the community that most are unaware of. A final decision occurs by June 30th 2020, in just over a month, during which time it would be a miracle if the city could conduct meetings, surveys and outreach to ascertain that the community, that had so strongly opposed the PDA, that outreach could be achieved. It will be a remarkable miracle if all in Terra Linda are somehow notified by mail, are able to attend community meetings and make an informed decision.

A DISTRACTED AND RUSHED PROCESS

It is surprising that at a time when all council and staff's focus should be COVID-19 and responsible business reopening efforts should have to be diverted away to long term planning on the 2050 time horizon.

A poll taken on Nextdoor.com with over 160 respondents from the immediately affected North San Rafael neighborhoods demonstrated that the majority of residents oppose a decision to form (or reinstate) a Priority Development Area in Terra Linda. Yet the council has not conducted any poll - it has repeated it's process of listening to activists and activist groups.

CITY COUNCIL REVERSES IT'S OWN FINDINGS

City planner, Paul Jensen, who clearly stated and showed slides showing PDAs came with a clear expectation of accelerated growth in a special council meeting on September 6th 2013, somehow reversed his position and omitted the findings from his prior report that PDAs set a clear expectation of growth.
https://www.cityofsanrafael.org/public-meeting-archives/

Here are slides presented by Jensen at the September 6th 2013 meeting, note the bottom bullets in both slides: 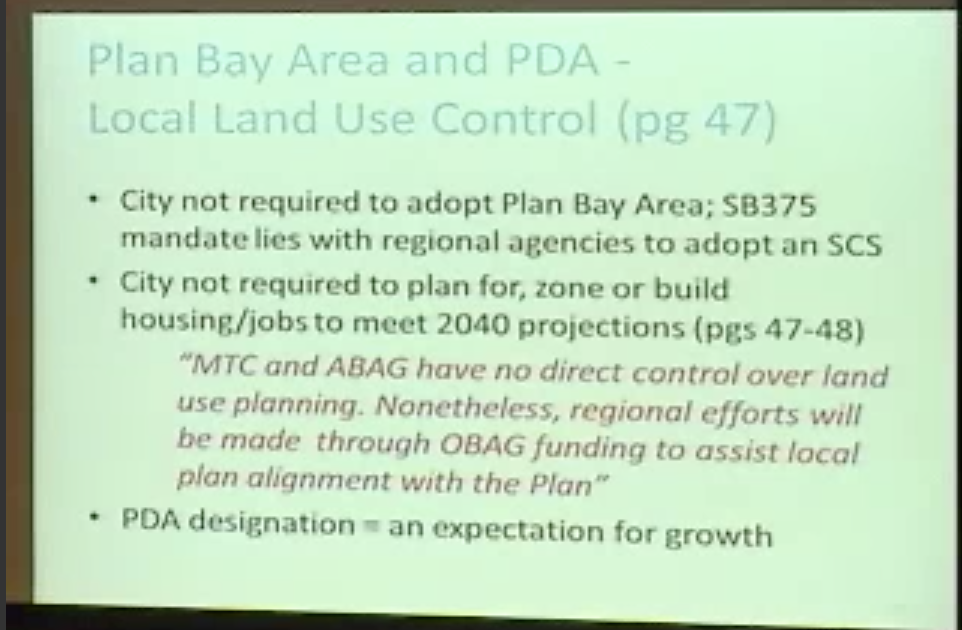 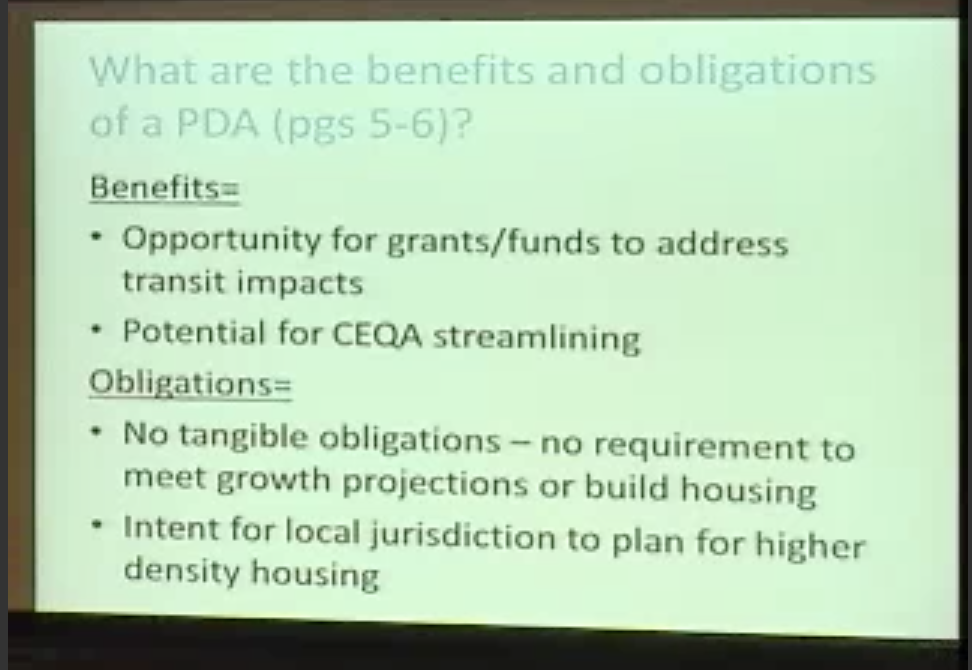 Nowhere in the May 2020 staff report given to council was this 2013 finding referenced.

So Terra Linda is being intended for high density housing growth during a major pandemic where density has been closely correlated to higher infection rates.

"I have grave concerns that we're going to have more strings attached going forward. .. when approved in 2008 we were told it was a funding mechanism. Fast forward 5 years and there are housing and job components that came through very strongly. It would be a different discussion back in 2008 if those numbers had been part of the original discussion. ... That makes me nervous....

If we have expectations handed down to us I'm concerned we won't be able to have the control that we want. The issue has been well vetted and researched. We had three meetings in addition to many one on one meetings with individuals."

Now Kate Colin dismisses her own understanding stating there will be no strings attached this time.

"If we have a PDA designation, and a developer comes...to the storage side or Northgate, we're going to have more of an obligation if we've taken money for improvements. Now it's tantamount to approval of the project. I think the expectation has been created. There will be more development with a PDA. We have created an expectation."

"I don't think a PDA is a good Idea and should be rescinded."

WHY IS THE CITY CONDUCTING THIS UNDERTAKING DURING A CRISIS?

The PDA engagement in 2009-2013 demonstrated how city council failed to conduct appropriate outreach, which it admitted in staff reports, and is now repeating the mistake during a pandemic crisis.

City planners are already working 60+ hour weeks on setting rules for businesses to reopen during the pandemic. They don't have the capacity to take on a non-urgent major long range planning initiative.

The city planning department and council should not be kicking a hornets nest on a long term planning exercise for "Plan Bay Area 2050". It's inconceivable that outreach can be effectively conducted during shelter in place, and even to date the city has proven non-transparent and to be rushing this major community decision through an accelerated process seeming intentionally without alerting or engaging citizens.

If the city wanted to put in place a PDA, knowing it was not supported by residents, it could not have done a better job at progressing this designation through stealth during a major pandemic crisis.