Marin Clean Energy claims it is all about being green. But examination of the agency’s marketing and accounting reveals it is more about separating consumers from the green in their wallets than the green MCE delivers to the environment.

MCE’s energy prices are currently higher than PG&E’s, but MCE hopes that its $214.7 million retained cash & equivalents, together with issuing more debt, will improve its financial picture. By taking ownership of money that belongs to its ratepayers -- rather than providing a monthly stream of lowest possible prices -- and by keeping that cash in its own general funds account, MCE paints a rosy self portrait of economic vitality for the bond rating agencies it romances in hopes of garnering another "B" or perhaps a "+".

MCE then uses improved bond ratings to negotiate lower prices from its energy suppliers -- on the backs of labor unions who construct the pool of renewable resources from which MCE buys its power, made possible by reluctant union employees who underwrite the negotiated reality with lower wages and short-term jobs.

Are you getting the picture that MCE's world is based upon using and leveraging others to enrich itself or, more aptly, a select few within the hallowed offices of the clean energy agency?

MCE assumes no risk anywhere in its activities, deftly shifting and off-loading liability onto others while shrouding itself in a green banner. However, MCE's shell game points directly at the agency's CEO and her key consultant who syphon money from the scheme, ensuring their continued places at the top of the public sector payout pyramid.

How does a not-for-profit accumulate more than $214 million?

MCE benefitted by being the first operating Community Choice Aggregator (CCA, aka CCE) in California. MCE’s cash was amassed by charging its ratepayers premiums for inexpensive, faux clean energy that it sold as uber “green,” but in fact was just ordinary dirty power. This practice lasted nearly 10 years until California’s AB 1110 shut down MCE’s lucrative ruse.

The combination of AB 1110, consumer wariness, and the COVID-19 pandemic have made it all but impossible for new CCAs to gain a financial foothold, where thin profit margins continue to shrink in the commoditized electricity market.

While MCE promoted its style of faux clean energy (mostly using its RECs gambit), the agency continued to step up its product offerings, inventing a cleanest class of energy it called Deep Green.

Since its May 7, 2010 business launch, MCE has advertised to consumers and municipal jurisdictions that they could save the environment by “opting up” to Deep Green. For about $60 per year for an average-sized home and around $10,000 per year for a municipality, enrollees were led to believe they were receiving 100% green electrons.

To fortify the Deep Green brand, MCE reinvented the laws of physics, representing that its green “juice” was distributed directly to the homes of its Deep Green members. MCE laid the subliminal groundwork -- capitalizing on consumer naiveté and shaping environmental concern -- consumers not enrolled in Deep Green continued to receive “brown” electricity from the same power lines that ran through the neighborhood.

Even MCE’s Opt Out notices, which were consumers’ introduction to being automatically switched out of PG&E and into the MCE program, claimed MCE secured renewable energy that is delivered “to your home or business” through PG&E’s wires.

Engineers called MCE’s claim an outright fabrication. But, many consumers believed the myth and joined the Deep Green club of residential “Champions” and municipal “Leaders.”

In reality, generic volumes of nuclear and fossil-fired system power, aka unspecified sources, that feed California’s electric grid are regularly delivered to everyone whether they participate in MCE or PG&E or Deep Green or Local Sol. This occurs everyday when intermittent renewable energy sources (wind and solar) suddenly stop producing power, such as when the wind stops blowing or the sun sets, or cloudy weather or smoke from wildfires reduce solar production.

Do not tell’em about those greenhouse gases

During implementation of California’s new energy reporting law, AB 1110, PG&E proposed a forensic reporting program where all load serving entities (PG&E, MCE, etc.) would disclose on Power Content Labels the actual energy types consumed throughout the year, including the hidden system power that everyone consumes -- actual energy deliveries of each energy type would be catalogued behind-the-scenes on an hourly basis.

PG&E’s recommendation would have exposed all of the actual dirty energy that is intertwined with the 100% clean energy products that people believe they are receiving at their home, business, and municipal offices.

Sitting idly and allowing a new and intrusive reporting process to take root would have forced MCE to explain how, after years of telling consumers that they had unhooked from dirty & dangerous fossil fuels with Deep Green, suddenly none of that was true.

That would not only be problematic for MCE's consultants, scrambling to redesign its energy portfolios with finessed and euphemistic footnotes on Power Content Labels, but MCE would have to deal with a loss of revenue attributable to a sudden uptick in Deep Green opt outs reflecting a rejection of manipulated truths. More awkward -- how would MCE explain this to bond rating agencies and to a bond market into which it planned to issue debt to investors?

PG&E's proposal, and the consumer awareness it would trigger, could take the wheels off of MCE's and its trade association leader's, CalCCA's, green wagon.

MCE and CalCCA successfully lobbied hard against PG&E’s efforts, and kept the proposed methodology out of AB 1110. As a result of their "victory," thousands of tons of greenhouse gas (GHG) emissions attributed to Deep Green-type and Local Sol-type energy programs remain off the books and out of view from the public.

This, after MCE and other Community Choice Aggregators arrived on the scene claiming to be local, transparent, and responsible environmental stewards that were the obvious choice to replace PG&E and its alleged malfeasance (and that of California's other investor owned utilities, SCE and SDG&E).

Deep Green accounting... a page out of Enron’s playbook 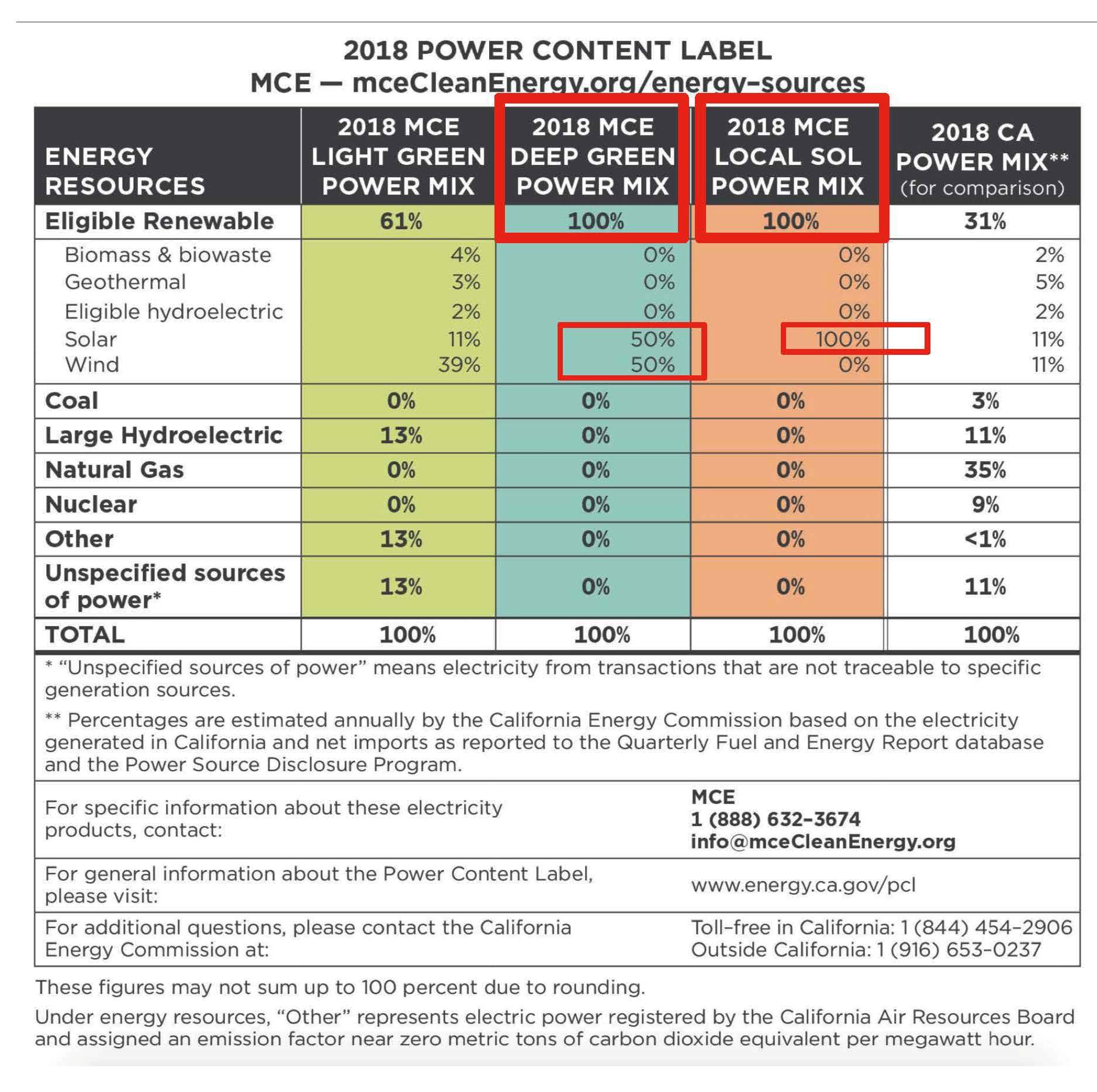 Deep Green is promoted as being 50% wind and 50% solar. So where does MCE put the fossil-fired system power deliveries that Deep Green (and Local Sol) participants consume throughout each day and night?

Those dirty megawatt-hours are erased from Deep Green (and Local Sol), then assigned and penciled onto MCE’s Light Green GHG emission ledger and Power Source Disclosure forms and Power Content Label. (And even those reported volumes of dirty power are understated by MCE.)

Off-loading Deep Green and Local Sol emission liability onto Light Green is a page out of Enron’s pre-meltdown use of special purpose entities that were used as hidden repositories where troubled assets were parked in order to preserve Enron’s unblemished image.

Deep Green and Local Sol emit similar amounts of GHG emissions as MCE’s dirtier default product, Light Green, into which consumers are automatically switched from PG&E. Again, that dirty power (aka “Unspecified sources” or "system power") fills in energy shortages that occur when renewable resources fail to produce energy (no wind, no sunlight, clouds). Without this fill-in Deep Green would trigger blackouts for everyone connected to California’s electric grid -- a grid that remains sensitive to even the smallest energy interruption.

Deep Green consumers include Marin’s biggest electric users such as the Sewer Agency of Southern Marin (SASM), College of Marin, and every municipal jurisdiction in Marin. Last year, the City of San Rafael spent more than $40,000 for Deep Green energy, twice what was originally budgeted when compared against the Marin IJ's original report. 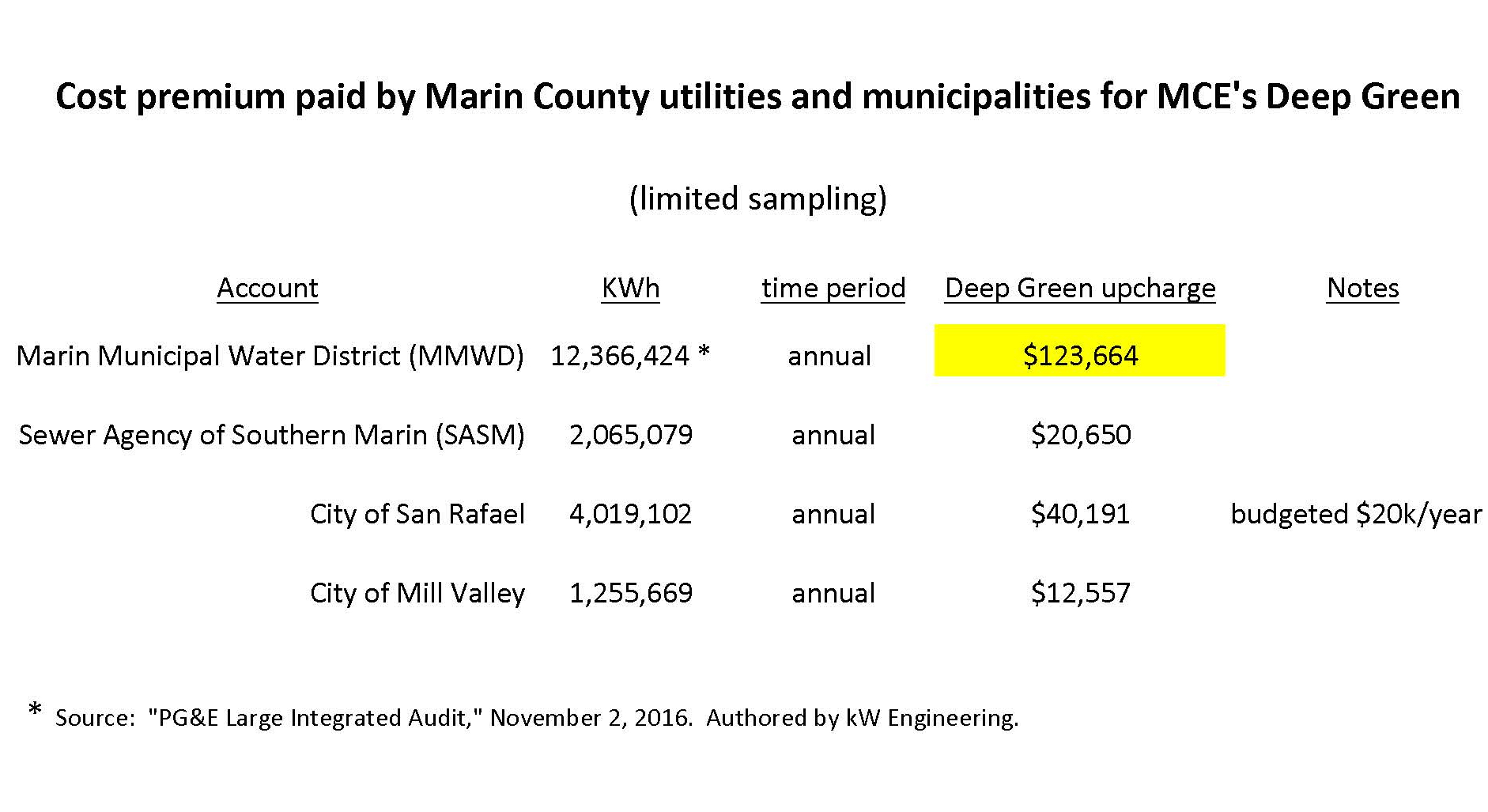 This expenditure has no more benefit for the environment than if MMWD remained a Light Green ratepayer -- the money saved could have been used by MMWD to reduce water prices for its ratepayers instead of funding MCE’s payouts. After including medium and small electric loads, MMWD spends more than $125,000 per year to receive the exact same delivered energy mix as Light Green participants.

MCE’s 2019 electric power mix identifies that, for the first time, MCE procured unit-specific nuclear power. This 1%, more than 48,400 megawatt-hours, is enough to power the City of Mill Valley's municipal and private sector load for a year. The nuclear energy was procured from Tacoma Power, a member-owner of The Columbia Nuclear Generating Station located in eastern Washington, and from the Bonneville Power Authority, which funds Columbia’s operations and markets its energy. 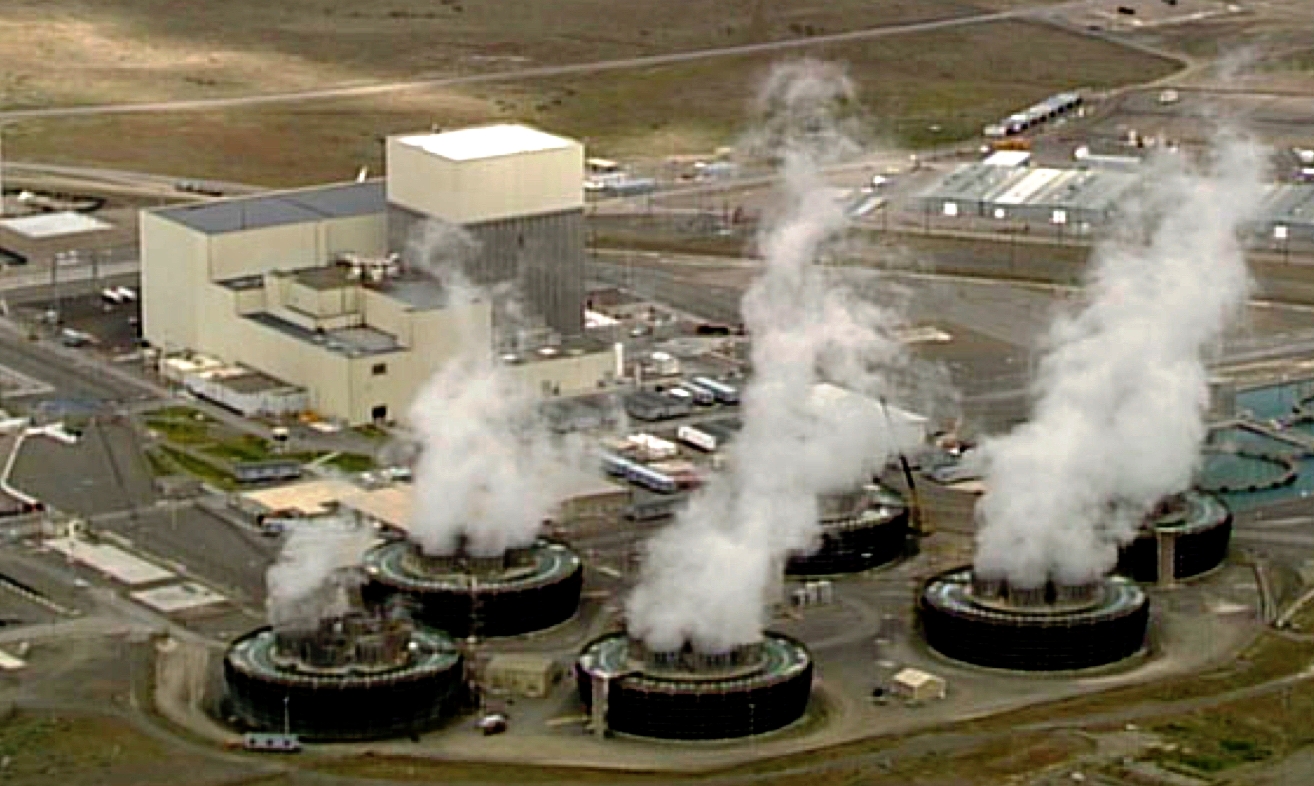 Columbia's nuclear power is a trial balloon for thousands of nuclear megawatt-hours (MWhs) MCE is eligible to receive -- no charge -- from PG&E’s Diablo Canyon Nuclear Power Plant as part of an exit fee (“PCIA”) negotiation with the utility.

Currently, MCE rejects its Diablo allocation with a caveat to “revisit this decision in the future based on new information.” That is because MCE will be gauging MCE stakeholders’ reaction to its inclusion of the 1% nuclear power from Columbia Generating Station. If the response is tepid or non-existent MCE will load Diablo Canyon nuclear power into its energy portfolio, believing that the public either does not care or does not notice.

If MCE accepts its free allocation of Diablo Canyon nuclear power, the agency will avoid expenditures for carbon free energy (large hydro) of about $200 million. However, by including Diablo Canyon’s nuclear power in its energy portfolio, MCE would contradict all of its declarations about the environmental hazards that nuclear represents, the need to shutter all nuclear power plants, and MCE’s pre-launch statements that large hydro is a habitat killer and that “the story gets even worse when you talk about nuclear.”

MCE’s Resolution 2011-09 and its "urgent" call upon the legislature will put MCE in the crosshairs of hypocrisy as MCE becomes nothing more than a junior version of PG&E.

Jim Phelps is a consumer advocate, specializing in energy issues and CCAs. Before retiring he was a power contractor and utility rate analyst. He consults municipalities who are considering the merits of CCA and the accrued effects on municipal Climate Action Plans. He served as a contributor to the California Energy Commission during its two-year AB 1110 Implementation Rulemaking.