The Dow Jones, CalPERS, and Us

Economic theory suggests that central banks can stimulate consumer demand, business lending, and the economy in general by lowering interest rates in bad times. At the same time, the stock market is generally considered a reflection of the health of the economy, i.e., if the market is booming it portends good times, ahead.

So, then why has the Federal Reserve been cutting interest rates when the stock market is making new all-time highs, almost daily? They have usually only done that when they see the markets faltering. As a casual observer, you start to wonder if they are afraid of what might happen if the markets did fall, even just a little.

Assuming that the Fed hasn't totally lost its way and isn't being guided by the tweet of the day, the question is what is their reasoning? And most importantly, why should you care?

Does the stock market prices matter to the average person?

The stock market is fundamentally driven by earnings. Companies make more money, their shares rise. We also know that we live in a consumer-based economy: the thing that drives those earnings. But, although consumer demand remains generally healthy, more and more, it’s being fueled by debt.[1] 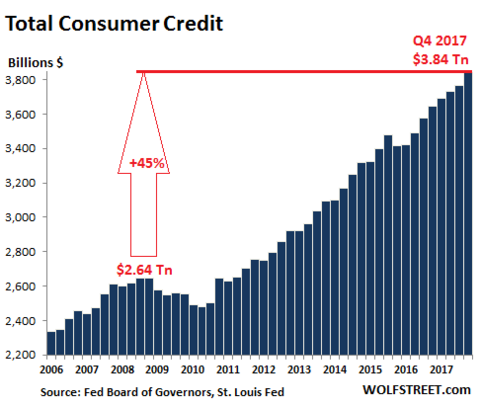 I’ve explained in previous articles, this is probably due to the fact that real wages for the average worker in the U.S. have been falling in inflation adjusted terms, since the early 1980’s. That makes it extremely hard for the average American consumer to get ahead, much less keep consuming. But unless they do, our overall economic growth is in jeopardy.

This makes it more important to know how the “real” economy is doing. Are economic indicators matching the confidence that the stock market is showing?

One of the most reliable, big-picture gauges of how the economy is doing is the Conference Board’s Leading Economic Indicators (the “US LEI"). They call it "leading" because as you can see, it tends to turn down before we recognize we're in a recession. 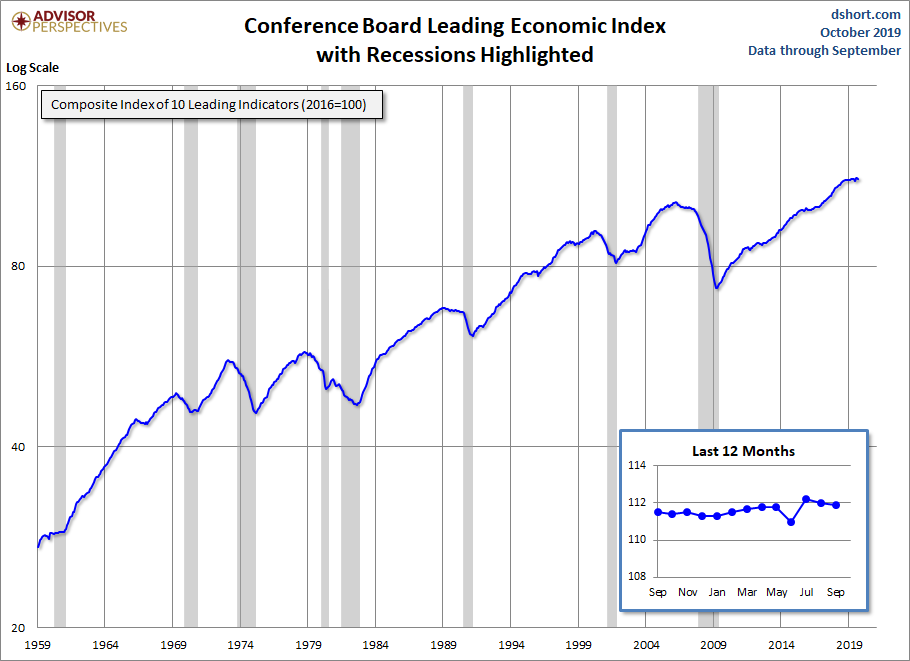 Is it this slight slowdown (flattening) of the indicators that has the Fed worried? Maybe, but the stock markets are supposed to be a leading indicator and usually are unless, of course, they are being driven solely by late-cycle emotion, greed, fear of missing out, too much borrowed money, and other deadly sins.

We need to look at more granular data to get a better picture of what’s going on. A good gauge is durable goods orders. Durable goods are things we buy, such as appliances, cars, furniture, tools, and other products, that are not for immediate consumption. It’s considered a gauge of consumer financial health.

The chart below shows the “real” (inflation adjusted) durable goods purchased (the blue line) per capita, based on the nominal monthly data,[3] since 1992. 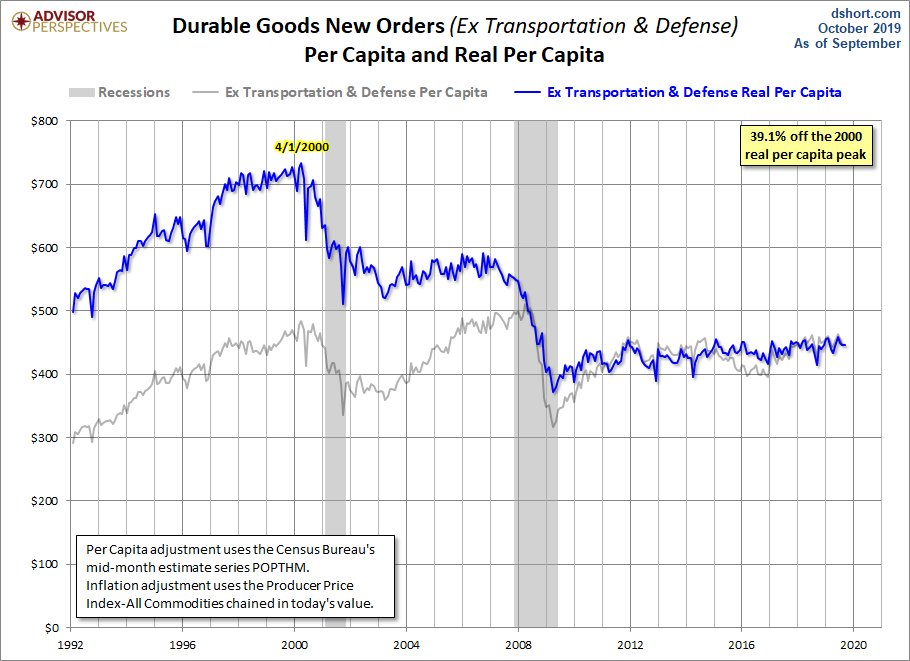 The picture is not reassuring of a robust "recovery." As noted by economist Jill Mislinski,

“the real per capita demand for durable goods had increased since the trough at the end of the last recession. But new orders remain far below their respective peaks near the turn of the century. A key driver, or lack thereof, for healthy growth in durable goods orders is growth in household incomes.”

Considering this, one has to ask, how long can the economy go on based on increasing debt and near zero return on savings, before the stock market starts to reflect that? The optimistic answer would be, it could go on for a while so long as the markets are not overly expensive.

But that’s the next bad news.

The chart below shows just how “over-bought” the markets are at the moment. In fact, we’ve only seen these levels 4 other times in the past 135 years.[4] And each time, it did not end well. 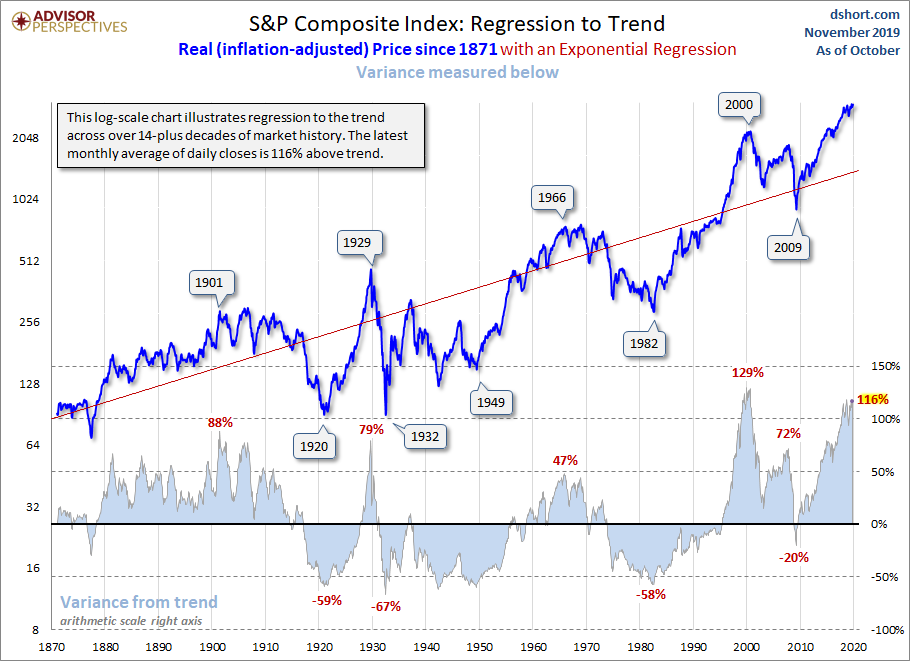 The bottom of the chart shows what is called “deviation from the trend" (also called the "mean"), which is the percentage that the market’s price is above or below its long term average: the thesis being that all prices eventually revert to the mean.

“The peak in 2000 marked an unprecedented 137% overshooting of the trend — substantially above the overshoot in 1929. The index had been above trend for two decades, with one exception: it dipped about 15% below trend briefly in March of 2009. At the beginning of November 2019, it is 116% above trend, exceeding the 68% to 90% range it hovered in for 37 months. In sharp contrast, the major troughs of the past saw declines in excess of 50% below the trend. If the current S&P 500 were sitting squarely on the regression, it would be at the 1377 level.”

As the past decade has unfolded, in the wake of the 2008 global meltdown, returns on savings and bonds have fallen to historic lows. In response, everyone, including managers of mutual funds, pension funds, university endowments, annuity companies, and insurance companies, has been on an increasingly desperate “search for yield,” sacrificing investment “quality” and taking on more risk to try to achieve the kinds of returns they have experienced in the past, or more importantly for institutional investors, the levels of returns that the success (solvency) of their entire enterprise is now based on. This behavior has been true for both stock and bond investments.

So far, it's been working. But let's keep in mind that the riskier the asset the more likely the holders will be susceptible to panic selling if the market heads south. This combined with excessive leverage has been an integral part of every market crash in history. If that happens, all of the market's participants (i.e., mutual funds, pension funds, university endowments, annuity companies, insurance companies, etc.) end up having to liquidate and deleverage as markets go down, to cover withdrawals and maintain liquidity.

In this regard, The State of California may be in particular jeopardy.

The Poster child for this failure to achieve required returns is CalPERS, the largest pension fund in California and the U.S. Worse still, they are holding on to the misguided belief they can achieve 7% returns annually, going forward (which they need just to meet their growing pension obligations), when the truth is that on average, they’ve missed the mark more often than not over the past decade.

Real estate will always be a good investment over the long term because it’s at least based on something tangible. The wealthy have private banking, hedge funds, and private equity investment to tide them over. And I suppose people will always buy art, collectibles, and precious metals and stones. But unfortunately, a great deal of the general public’s and government's "wealth" has become increasingly dependent on the fluctuations of the stock markets (even if that's not obvious to either of them).

So, the fate of the stock market will not just impact public retirement plans, but it could ultimately impact the solvency of our state and local government (who will be on the hook for the shortfalls).

For better and for worse, in the desperation for returns, we’ve put most of our eggs in one basket, the public equity markets: a basket that is so bad at pricing in risk that a company like We Work can go from being “worth” more than $47 billion one day to being a questionable “going concern” the next.

That a We Work, or an Uber, or some cannabis company fails to remain solvent is of no consequence to the average American worker. But CalPERS’ investment portfolio faltering, and other pension funds like them, is a whole other matter.

Who will pay the price if they have to finally face the music? Is this why the Fed is cutting rates with stocks at all-time highs, to keep the “CalPERS” of the world (and the governments that will have to bail them out) afloat?

The counter arguments to what I’ve said is that so long as interest rates (the cost of borrowing money) is low, the economy is fine. Businesses will borrow and invest and consumers will borrow and keep consuming. But, what if that’s wrong? What if the music everyone is dancing to suddenly just stops?

What happens when public pension funds can no longer meet their obligations, but must do so? What happens when tax hikes, to pay for the bailouts, rise to the point of driving the rest of us out of our homes?

As the old saying goes, 'If you’re playing cards and you don’t know who the patsy at the table is… you’re the patsy.'

I’ll leave these questions to be answered another day. But I ask you to consider the next set of charts below.

The first is known as the “Buffett Indicator,” named after legendary billionaire investor Warren Buffett.[5] It shows that the stock market’s Wilshire 500 Indicator has diverged about 140% above the nominal, quarterly, gross domestic product (the value of the economic output of our entire economy). The last time this happened was just before the NASDAQ tech bubble crash of March of 2000. 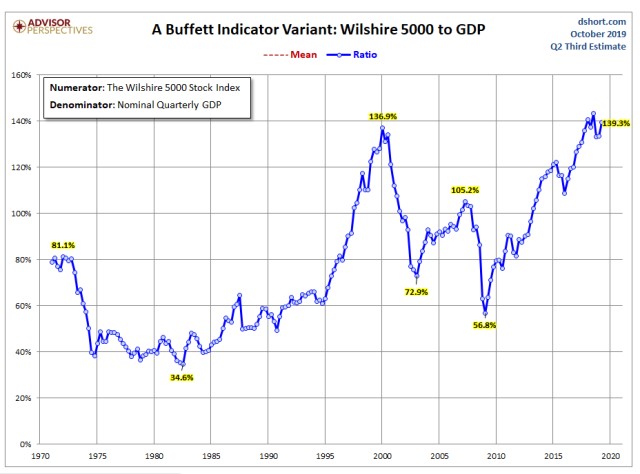 Not an encouraging chart, unless you believe the global economy is on the verge of a massive boom.

The next chart connects the dots about what this all means to the average worker. It shows how many hours a person has to work to purchase the commensurate value of the “market,” as shown using the S&P 500.

What it shows is that it has never been this high in history. And this isn’t even inflation adjusted hourly wages. That chart would look much worse. So, again, unless you think that the average worker is about to get a massive raise or they have so much time on their hands that they could double their working hours to make up the difference, the forecast is not encouraging. 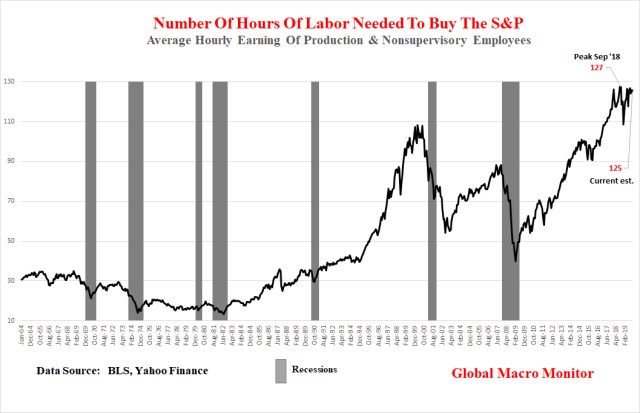 The final chart shows how taxes impact the so-called “earnings” that the stock market uses to measure growth. Again, fundamentally, it is a company’s earnings that justify its stock price. 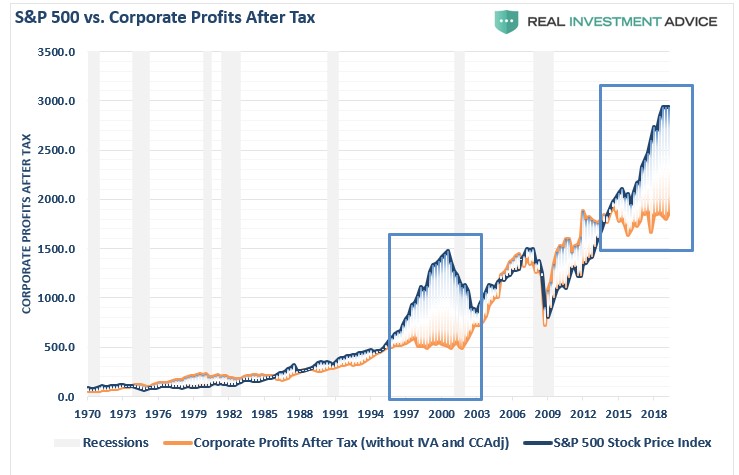 As Lance Roberts, the author of this chart, notes,[6]

“If the economy is slowing down, revenue and corporate profit growth will decline also. However, it is this point which the ‘bulls’ should be paying attention to. Many are dismissing currently high valuations under the guise of ‘low interest rates,’ however, the one thing you should not dismiss, and cannot make an excuse for, is the massive deviation between the market [prices] and corporate profits after tax [real earnings].

“The only other time in history the difference was this great was in 1999.”

Maybe I’m missing something and I’m dead wrong, or maybe I worry too much... or maybe I’m just early.

But when we talk about how our local and state government spend our tax dollars, and the outrageously untouchable salaries and lifetime benefits they hand out to public officials, and the seemingly endless increases in taxes and fees the state and local agencies are proposing for every conceivable thing, it’s not too early to get our house in order.

READ PART TWO - When the housing “crisis” meets a financial crisis, who will pick up the tab?

READ PART THREE - Party on to the Apocalypse

Bob Silvestri is a Mill Valley resident and the founder and president of Community Venture Partners, a 501(c)(3) nonprofit community organization funded only by individuals in Marin and the San Francisco Bay Area. Please consider DONATING TO CVP to enable us to continue to work on behalf of Marin residents.