Have you ever been awakened by a nightmare that you’re running from something horrible, as fast as you can, but you’re not moving? What if I were to tell you that your brain might just be trying to integrate the reality of your life.

The real world is more like the way Neo saw it at the end of the Matrix than the way most of us think it is. At the moment, under the surface, it’s a lot more like your nightmare.

Meanwhile, our elected representatives and our cognitive-dissonance challenged governor seem incapable of seeing beneath the patina of things, so they are hell-bent on “quantifiable” solutions to the “affordable housing” crisis that are nothing more than symptom relief.

Sacramento is focused on passing a landslide of laws that giveaway the store to major banking, union, and development interests in a desperate attempt to get any kind of housing built. At the same time, it's somewhat amazing that they fail to see that increasing taxation, too many conflicting housing laws, excessive state compliance obligations for small cities, and “top down” control (not “local control”) are major reasons housing is scarce.

And, when it comes to taxpayers, Sacramento’s operating mantra seems to be, “The beatings will continue until moral improves.”

So, the fundamental question is, why can’t people afford housing that developers can afford to build? In other words, why has the “market” stopped working?

Let’s look at the data. According to the most recent Bureau of Labor Statistics data, as analyzed by Jill Mislinski at Advisor Perspectives,

“The Bureau of Labor Statistics has been collecting data on this workforce cohort since 1964. The government numbers provide some excellent insights on the income history of what we might think of as the private middle-class wage earner. The first snapshot shows the growth of average hourly earnings. The nominal data exhibits a relatively smooth upward trend.”

Per the chart below, this corresponds with what most of us think is real and what the media regurgitates to keep our mutual illusions intact and our government regurgitates to “keep the game going,” as it were: to put off the day of fiscal reckoning. 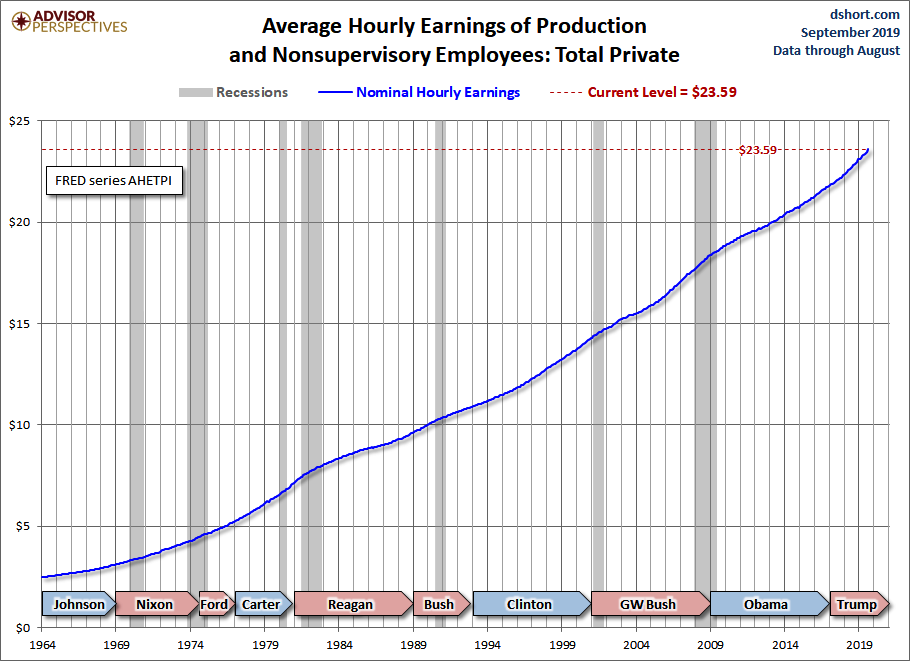 The reality, however, is more complex when we incorporate other factors into the mix. According to Mislinski there are 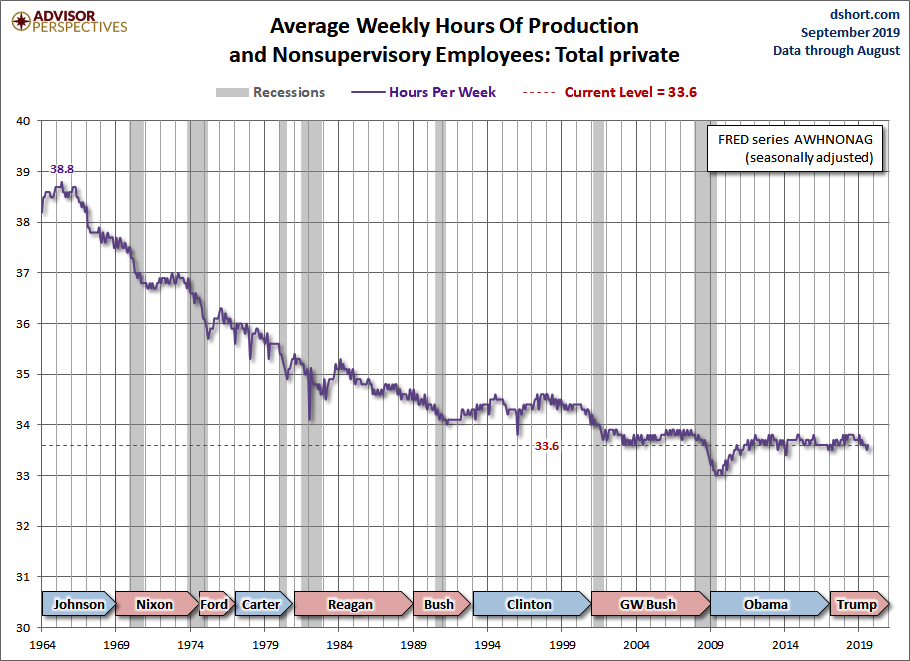 So, this means people are working fewer hours even though their rate per hour is rising. Translation: these two charts are off-setting each other so the rise in hourly wages is just barely above the total weekly pay after working fewer hours.

But, then there’s inflation to consider. Using the Consumer Price Index (CPI) calculated with a more accurate method, Mislinski combines all the data and finds that the “real”, inflation and working hours earnings of the average urban worker are down 11.2% over the past 46 years!

Yes, you read that correctly, wages have been dropping since October of 1972! 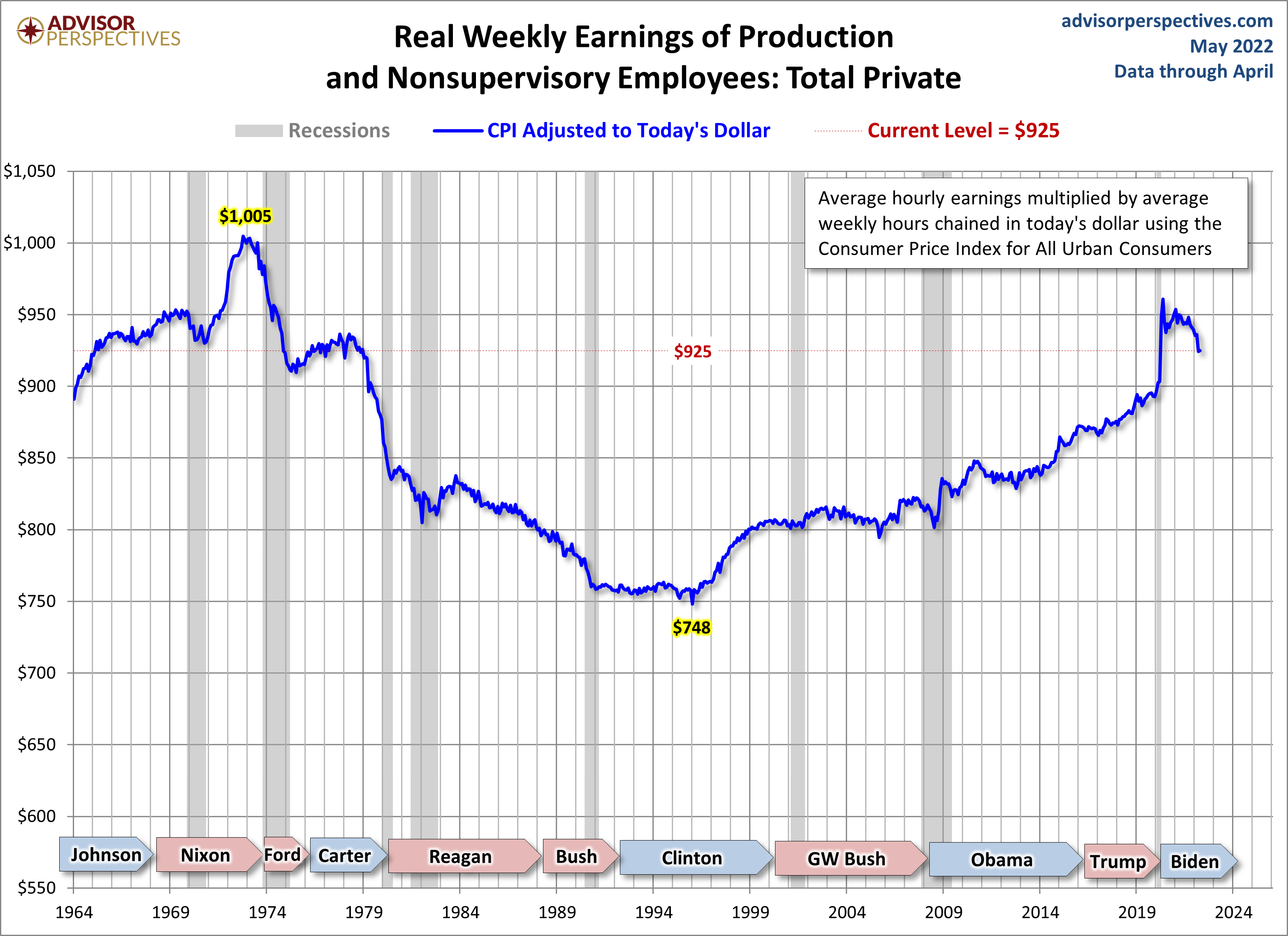 Could this have something to do with housing affordability? No wonder interest rates are close to zero but are still failing to jump-start housing construction.

Okay, so in the face of all this, what are they doing in Sacramento? Well, apparently, steaming forward with their misguided plans. As a glaring example of this, the State Assembly just enthusiastically voted for AB 1486, which removes important protections for those most in need of affordable housing.

In the words of the State Legislative Counsel,

(4) Existing law requires a local agency to give priority to the development of affordable housing for lower income elderly or disabled persons or households, and other lower income households when disposing of surplus land.This bill would remove that priority. [Emphasis added]

I would like to them who in the world this change in the law is intended to benefit? How does this in any way help create affordable housing for those most in need in our communities? As it is now, it’s next to impossible to find housing for children or young adults (18 to 30) or the elderly who have disabilities, physical and developmental. How will this help?

The answer, of course, is it won’t. It is clearly intended to benefit (and was probably written by) the biggest of real estate banking and development interests, who consider having to provide such “unprofitable” housing an impediment to the required returns on investment. The whole thing is just not something they will tolerate having to accommodate, or they’ll take their ball and go elsewhere.