The California State Legislature is beating a dead horse

Since the passage of Senator Darryl Steinberg’s Senate Bill 375 in 2008 -- the legislation that claimed, without the benefit of any credible science, that high-density urbanism is the best thing for the environment (as you may have guessed, it’s not) and housing affordability -- the state has been removing local control of planning and zoning as fast as they can to “densify” suburbs and ex-urban communities near urban centers everywhere in California. Each year dozens of bills are introduced to do this in one way or another.

Over the past 5 years, however, the pace of new bills overriding the constitutionally protected powers of locally elected government has increased exponentially and the state-mandated RHNA housing quotas have increased astronomically. So, how are things working out?

One of the state’s more progressive cities is Santa Monica. The city even voted to put residential rent control laws in place in 1979, though, they had to abandon residential rent control in 1995 because it hindered the development of new rental housing. (Builders wouldn't build housing that they couldn't rent profitably. Who’d a thunk it?) Still, by all comparisons, the city has shown it cares about housing affordability so one would think all the state housing legislation should have had a positive impact there.

According to renters in Santa Monica, who were recently interviewed by the LA times, that’s not the case. As one resident put it,

“You have developers building luxury condos and telling residents it’s going to create competition and drive prices down, but all I see are cookie-cutter one-bedrooms going for $4,500 a month. There are a lot of ugly buildings being built and a lot less skyline to see in certain parts of town.”

And regarding being able to buy a home, the influx of buying by major investment companies is making things dramatically worse. According to another Santa Monica resident,

“We’re going to end up in a scenario where the only people buying houses are private equity firms. That’s already happening. People aren’t owning the homes that are being sold right now.”

So, at least in the City of Santa Monica, state housing laws have not had the positive impact they promised. The state’s supply-side argument that claims building more housing of any kind will lower housing prices has not panned out, either. But not only have the state’s “slash and burn” to eliminate local control policies been a colossal failure in terms of increasing housing affordability, we now need to wonder how the state’s “punish and litigate” juggernaut perform in the face of what’s coming?

On Monday, August 15th, the National Association of Home Builders Confidence Index fell for the eighth straight month and dropped the most since April of 2020. The monthly confidence index fell 6 points to 49 in August. 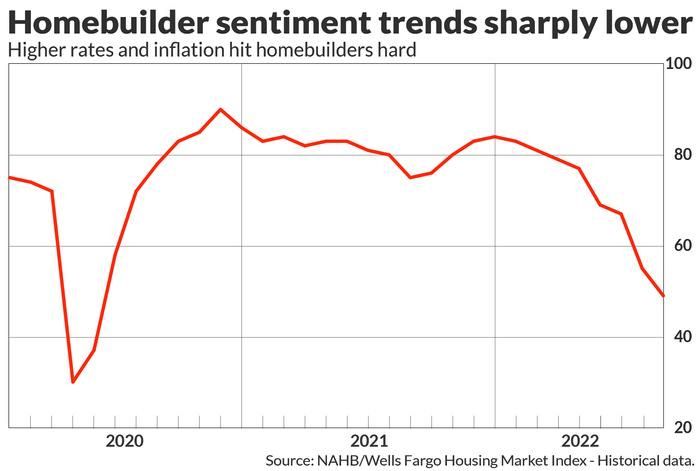 “Tighter monetary policy from the Federal Reserve and persistently elevated construction costs have brought on a housing recession,”

And he expects single-family housing starts to fall through the rest of the year. As a result, some developers are lowering single-family home prices to unload unsold inventory they got caught holding when mortgage rates recently skyrocketed.

But this won't necessarily lead an increase in affordability. Housing price reductions and buyer wage increases are being offset by increases in mortgage rates, so affordability remains out of reach for most buyers. A recent chart published by the National Association of Realtors bears this out. 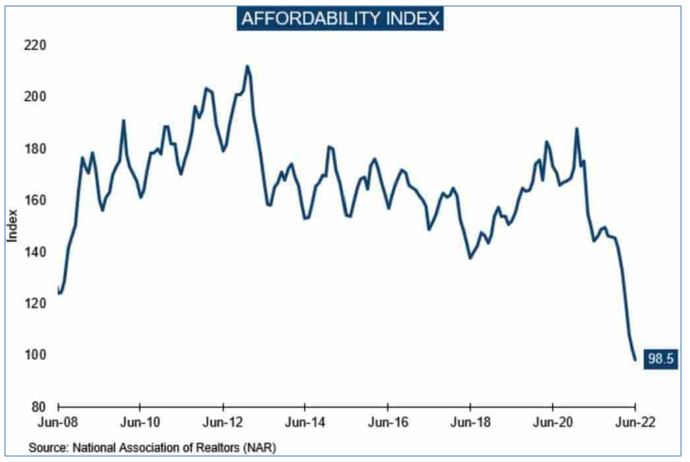 The slowdown in new permits and new construction has been less for multifamily rental housing development, but these are also now slowing, impacted by the rising costs of borrowing and construction: labor and materials. And at the same time, the cost of operating rental properties is rising (costs of insurance, maintenance, renovation, utilities, energy, etc.). Consequently, apartment rental rate increases are accelerating in all metropolitan areas across the country.

All this is happening while the state keeps demanding that cities and counties build more and more housing, or else.

But the situation is even worse than that. As we wrote back in May, the story the Federal Reserve is telling about the “resilience” of the consumer, in the face of all this, is just that: a story.

Consider this analysis showing how far and how fast the income of the average consumer is falling behind the cost of living. It’s no wonder that per capita debt is at an all-time high. 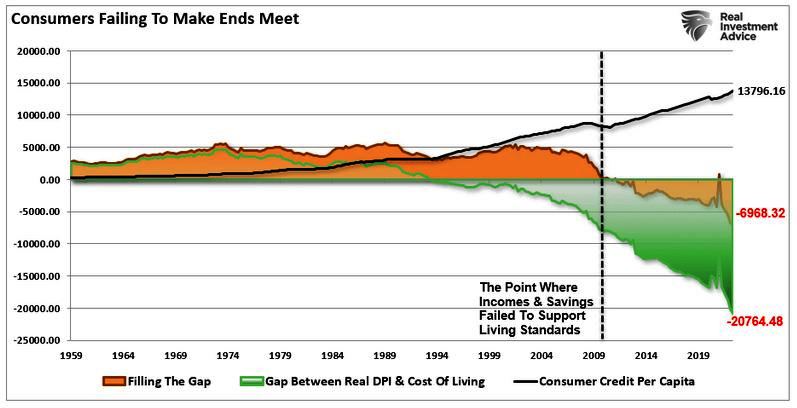 For our state agencies and our Attorney General to amp up their threats of punishments of local government, against this industry backdrop, is absurd. How does punishing local government, legally and financially, for investment decisions being made by private enterprise and market dynamics make any sense, whatsoever?

The predicament our state government finds itself in is due to its own abandonment of our most basic democratic principles; helping those most in need -- the poor and the disenfranchised and the working middle-class -- by supporting the development of innovative, affordable housing, instead of the folly of their luxury housing, supply-side, trickle-down nonsense and kowtowing to major corporate, financial, labor, and developer interests.

None of the housing laws passed in the last 10 years have focused on requiring all the new housing projects that are benefiting from the increased unit count bonuses and property tax exemptions and waivers of development fees need to be for low-income and working, middle-class residents. And even in instances where some of our longstanding housing laws do offer bonuses and incentives to build low-income units, such as the State Density Bonus Law, the percentages of low-income units required to qualify for those bonuses and incentives are paltry compared to the statewide need and the negative financial impacts on local governments.

Meanwhile, Wall Street investors are raking in record profits and large "nonprofit" housing developers have become bloated behemoths that have situated themselves in luxury offices, pay their top executives obscenely high salaries and lay off the bulk of their financial risk on government agencies and public debt, while revenue-starved California cities are operating as hollowed-out versions of their per-pandemic selves, and smaller, entrepreneurial, local developers are completely shut out of the top-down subsidy game.

We need some new ideas.