“For every complex problem there is an answer that is clear, simple, and wrong.” ~ H.L. Mencken

The state of California is in love with "BIG," overly simplistic, top-down, one-size-fits-all "solutions." Big government. Big business. Big tech. Big bankers. Big housing development. Big labor unions. Big laws. All the housing programs and legislation our state has created in the past 15 years have been designed by big moneyed (and connected) interests for big moneyed interests. In sum, the state has put all its eggs in a basket of trickle-down schemes and vanishing local control.

So, what has been the result? An utter failure to produce any significant amount of affordable housing.

The question is, why?

The Financial Crash of 2008

The greatest “bigness” mistake the federal government has made in the last 50 years was to put all their efforts into saving the major money center banks (who caused the financial crisis in the first place) while throwing the average working family and homeowner under the bus. The net result has been the weakest economic recovery since the 1930s, in terms of real wages for the average working family.

The overall damage this caused to “affordability” (of everything) remains with us, even despite the record-breaking printing of money by the government in response to the 2020 Covid pandemic, which finally sent some money to the bottom of the pyramid.

Similarly, California’s obsession with bigness is causing similar damage to the housing market and, paradoxically, has become an impediment to the construction of housing that is actually affordable for those most in need.

So, we need to ask ourselves, what if California housing laws are incentivizing the wrong market participants and the only way to successfully address affordable housing is by going small instead of big?

The large developers cannot build or manage projects that are not at least 100 units or more, in order for them to “pencil.” (I.e., cover their enormous overhead and provide the financial returns demanded by their investors) As such, they will not consider small, infill development. And unless a project is very large, they will not, generally, build mixed-use projects or adaptive re-use housing.

They are simply not geared up to that unless those other uses are minor and directly ancillary to their housing tenant’s needs.

And therein lies the problem.

Recent RHNA housing quotas strongly suggest that the Department of Housing and Community Development (HCD) is intent on pushing to have more and more housing developed in suburban and ex-urban neighborhoods in and around major cities (Los Angeles, San Diego, Sacramento, San Francisco, Oakland, and San Jose). However, the problem is that the vast majority of the existing housing/mixed-use development and redevelopment opportunities in those suburban and ex-urban areas are for smaller, infill projects (approximately 15 to 55 multifamily housing units) located in existing, under-developed commercial corridors, where functionally obsolete buildings on modestly sized parcels are abundant.

These sites are near jobs, located on major transit routes, and walkable to shops and services: all the things housing advocates and legislative jargon pretend to care about, but apparently don't.

Major developers--who are the biggest beneficiaries of the tax credits and regulatory incentives offered by the state—are not interested in taking advantage of these opportunities. So, who is?

According to the National Association of Home Builders, 81 percent of all home builders are small businesses—the ones building the homes not built by the 100 largest, national home building companies. But as it stands, this segment of the home building community is excluded from taking advantage of the state’s system of incentives and bonuses, which are generally designed for large projects.

Small developers are charged higher lending rates, pay a greater percentage of their revenues to operating expenses, and have little chance of receiving tax credits or other types of subsidies to enable them to build low-income or affordable units. And they have no seat at the table in Sacramento to influence legislation.

But smaller local developers know the lay of the land better in their communities, know the real estate market better, know local codes and planning goals better, and care more about the final outcome because they care about their community.

It is glaringly obvious that capitalizing, underwriting, and enabling small developers will be the key to robust affordable housing production in all communities across the state, going forward as few and fewer large development sites remain unspoken for. Yet, to date, Sacramento politicians have been oblivious to this.

A case in point of the important role smaller developers can play, is a relatively small development company in South Central Los Angeles, known as SoLa Impact. This is a company that is doing it right, building low-income housing and providing critical amenities and services for those most in need in one of the poorest communities in the state. (The average annual income of their tenants is $23,901 per year.) And they’re doing it, locally, by implementing state of the art construction methods and working in concert with a growing network of public-private partnerships.

Instead of being absentee landlords looking to exploit intricate loopholes in the maze of housing laws passed by Sacramento bureaucrats, in order to squeeze the last drop of profit from "the deal," they are in it for the long run.

SoLa Impact has a portfolio of about 1,500 affordable apartments in L.A. that are infill development and redevelopment and are less than 100 units in size, with some as small as 28 units. They use prefabrication and componentized construction methods to lower building costs and because they are developing in one of the most under-served areas of the city, they can take advantage of less expensive land costs and federal Opportunity Zone regulations to leverage their impacts and returns on investment in the service of their community.

As a result, they are building low-income housing units at a cost of approximately $250,000 per unit, instead of the industry average of the $600,000 per unit cost that large developers and so-called “nonprofit” developers claim they need to spend to build the same product. 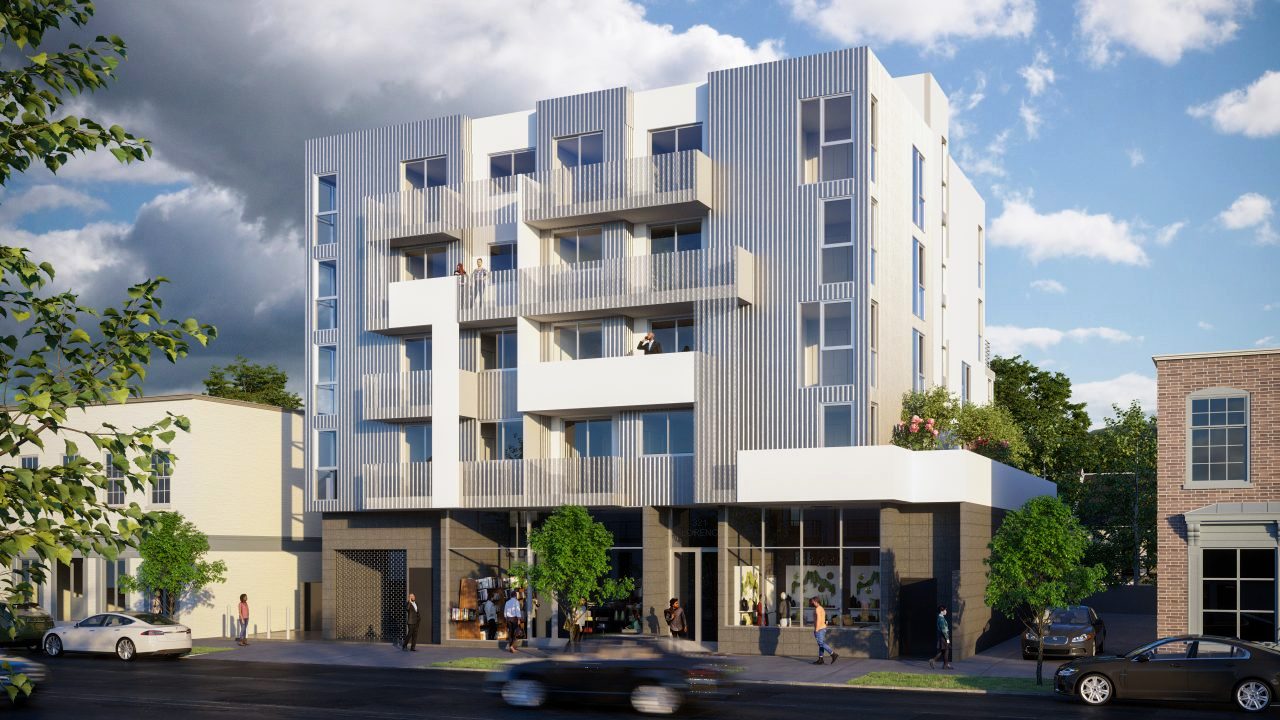 “Project Florence [pictured above] is a mixed-use development housing 31 apartments with 100% of units reserved for low-income tenants. A large community room and common open space will be provided on tiered patios with views of the downtown skyline. Nearly 700 sq. ft. of the ground floor will be dedicated to commercial space. This building is conveniently located near transit, grocery stores, retail stores, and restaurants.”

SoLa Impact is just one demonstration of how small, local firms can successfully serve people in communities that really need housing; communities that are ignored by large development companies that really just want to build luxury housing in the highest priced areas, while providing a token amount of “affordable housing” to gain approval and qualify under the “big is better” state bonus and streamlining legislation.

Clearly, government needs to create more incentives for small, local developers to address the housing challenges in their local communities. They deserve a seat at the table more than any of their "big" counterparts.