Is Housing Affordability a Thing of the Past, or...?

Are housing prices now in a "new normal" or is the housing market at another unsustainable peak similar to 2007? This is a question on the minds of all industry analysts and a lot of homeowners who’ve bought homes in the past two years.

No one knows, but we are presently witnessing something unprecedented: rapidly rising mortgage interest rates and skyrocketing housing prices. Their relationship is usually inverse to each other. The net result is that housing is even less affordable now than it was before the pandemic… or even since six months ago.

In fact, housing unaffordability across the entire nation (even the western world) is at levels not seen since the stock market crash of 1987 or the 2006-2008 housing bubble/collapse. The interest rate of a 30-year fixed-rate mortgage has gone from 2.75% last winter to 5.25% in May.

Meanwhile, to make matters worse, the cost of living, overall, (food, healthcare, education, etc.) for the average, working-class family is off the charts, while the Federal Reserve is hell-bent on further destroying consumer demand by raising interests as fast as they can, even though they admit that there’s nothing they can do about the price of gas or food or driven by supply chain woes, or anything else. And now, some analysts are talking about the cost of oil going “parabolic.”

This is a phenomenon far beyond being about “housing costs” or the capacity of the Federal government to remedy by printing money. And it’s certainly not something that small cities designating “housing opportunity sites” for their local Housing Element to their General Plan can even put a dent in because it’s much more than a housing problem.

That said, the cost of buying a home, in terms of real, inflation-adjusted income is now completely unsustainable.

Look at the chart, below. It shows the cost of the average monthly payment for “principle and interest” to purchase a home, for a typical 30-year mortgage with 20% cash down at the time of purchase. Granted, the numbers shown are in nominal terms (not inflation-adjusted) but even with adjustment, we’re at peak 2007 housing bubble costs. 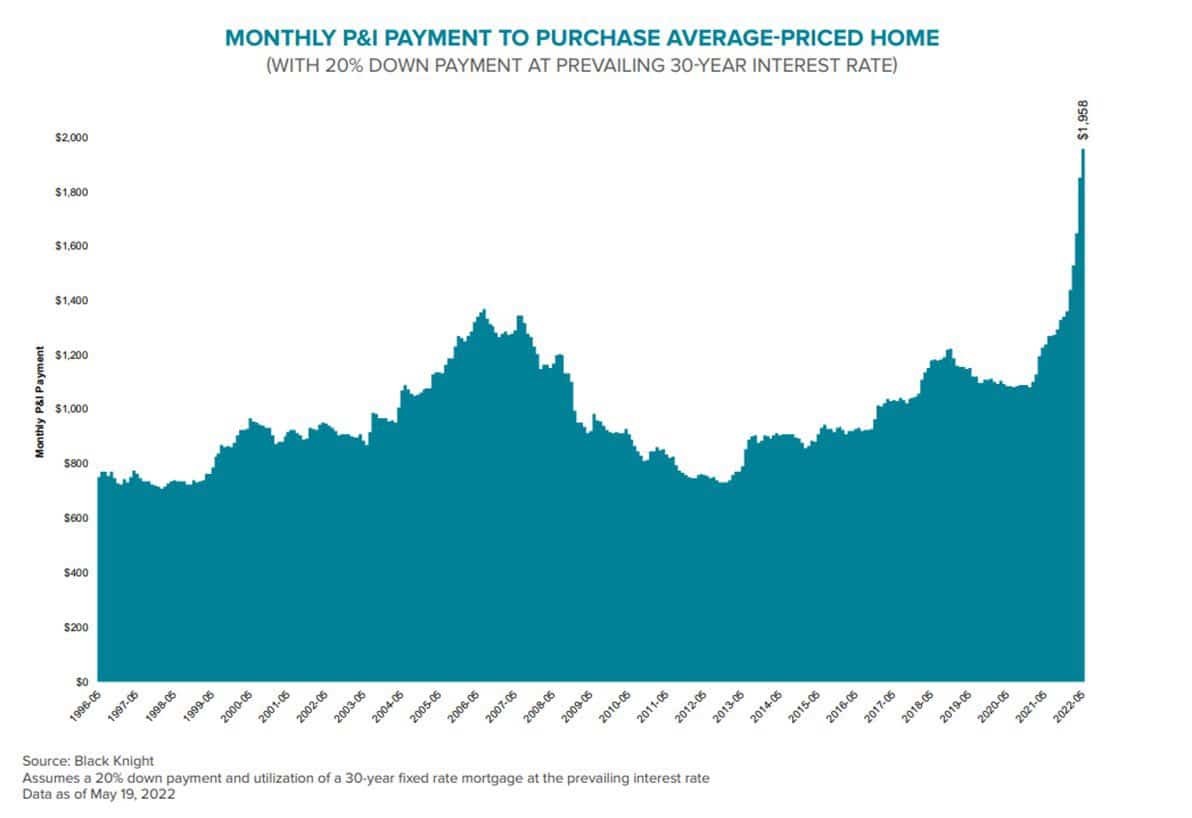 According to Marketwatch / Black Knight,

“When comparing the rise in housing costs to current income levels, it now takes 33.7% of the median household income to purchase the average priced home, within a whisper of the 34.1% all time high at its peak in June 2006.”

“The majority of housing markets in the U.S. are now overvalued, according to the latest data from CoreLogic.”

A Yogi Berra once said.

“It’s tough to make predictions, especially about the future.”

But something’s gotta give.