On April 27th, the Marin County Open Space District quietly posted signage at the entrances to the Bob Middagh Trail in the Alto Bowl Preserve, instructing mountain bikers that there has been a “change of use” - biking is no longer allowed.

The signs appeared without fanfare, email blasts, or publicity: a far cry from the widely publicized (and illegal) “official opening” of the trail to mountain biking almost a year ago. 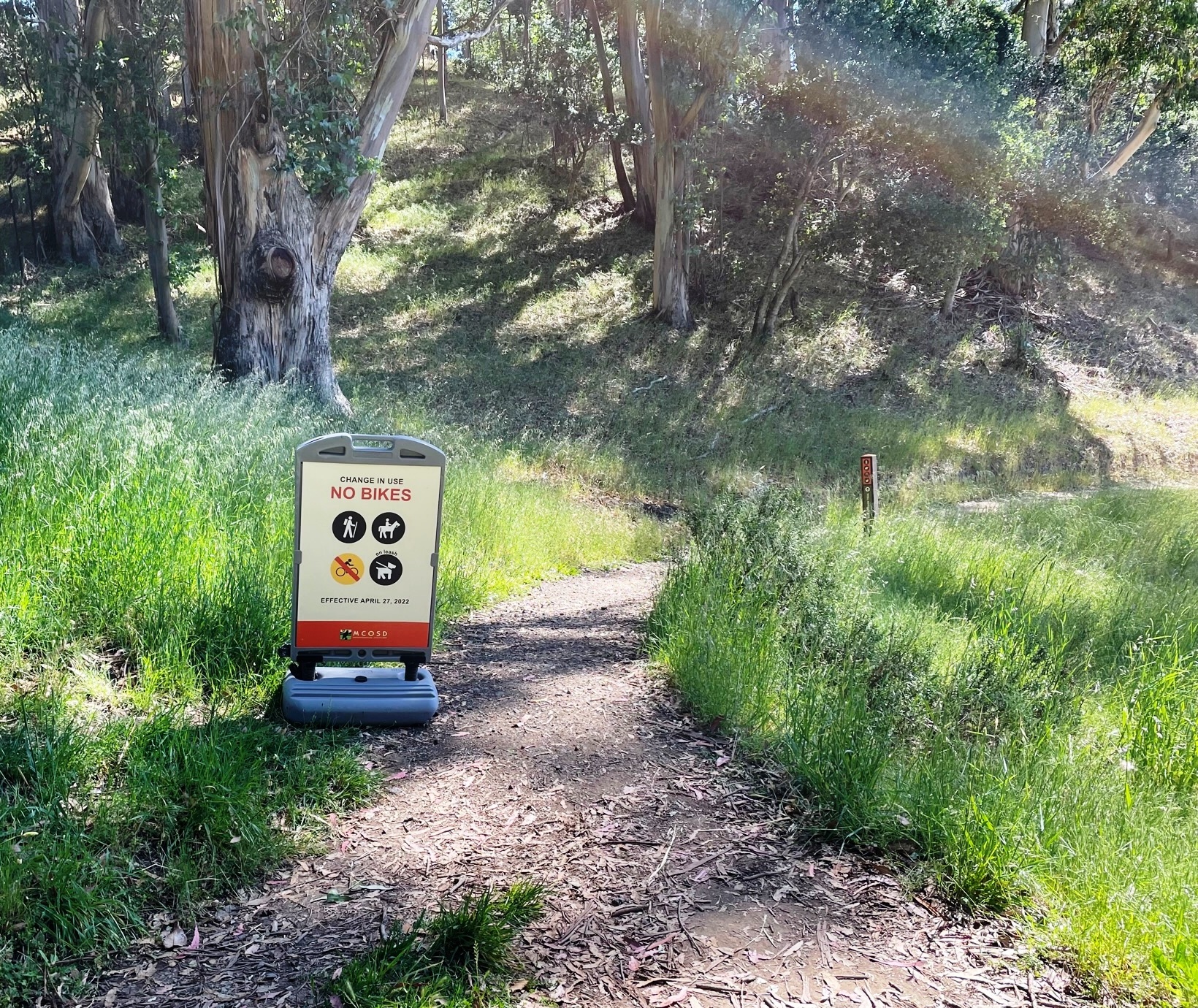 Gone were John Campo and the staff photo ops, the County’s public notices, flyers, and website announcements, the Marin IJ’s glowing publicity, and the social media blasts by the Marin County Bicycle Coalition website that we saw for the opening back in June of 2021. In fact, other than the signs, there has been no effort, whatsoever, to inform the public about why the trail policy that was announced with much pomp and circumstance last June, is suddenly no more.

Other than the signs, the only other way the public has been informed about the new status of the Bob Middagh Trail was an article published in the Marin Post, on April 3rd, which summarized the facts and circumstances as follows:

“As it stands, biking on the Bob Middagh Trail since that June 2021 “opening event” has been and continues to be illegal.”

There’s no mention of this recent “change of use” on the County's website. And if you search the Marin Open Space District website or Google “the Bob Middagh Trail" or the "Alto Bowl Preserve,” the pages that once described the “Project Plan” no longer exist. Meanwhile, the Marin County Bicycle Coalition website still claims that the Middagh Trail is “Open to bikes.” So, the only way the biking community will know that the trail is now officially closed to biking is when they arrive there to ride it.

At that point, how big of a deterrent do you think the signs will be?

Predictably, mountain bikers have already kicked the signage aside, rode over it, and otherwise disregarded it. And, of course, the County continues to do absolutely nothing to enforce its new message. So, hikers and equestrians will still have to remain vigilant to avoid being blind-sided by speeding bikers, verbally threatened, and driven off the trail. 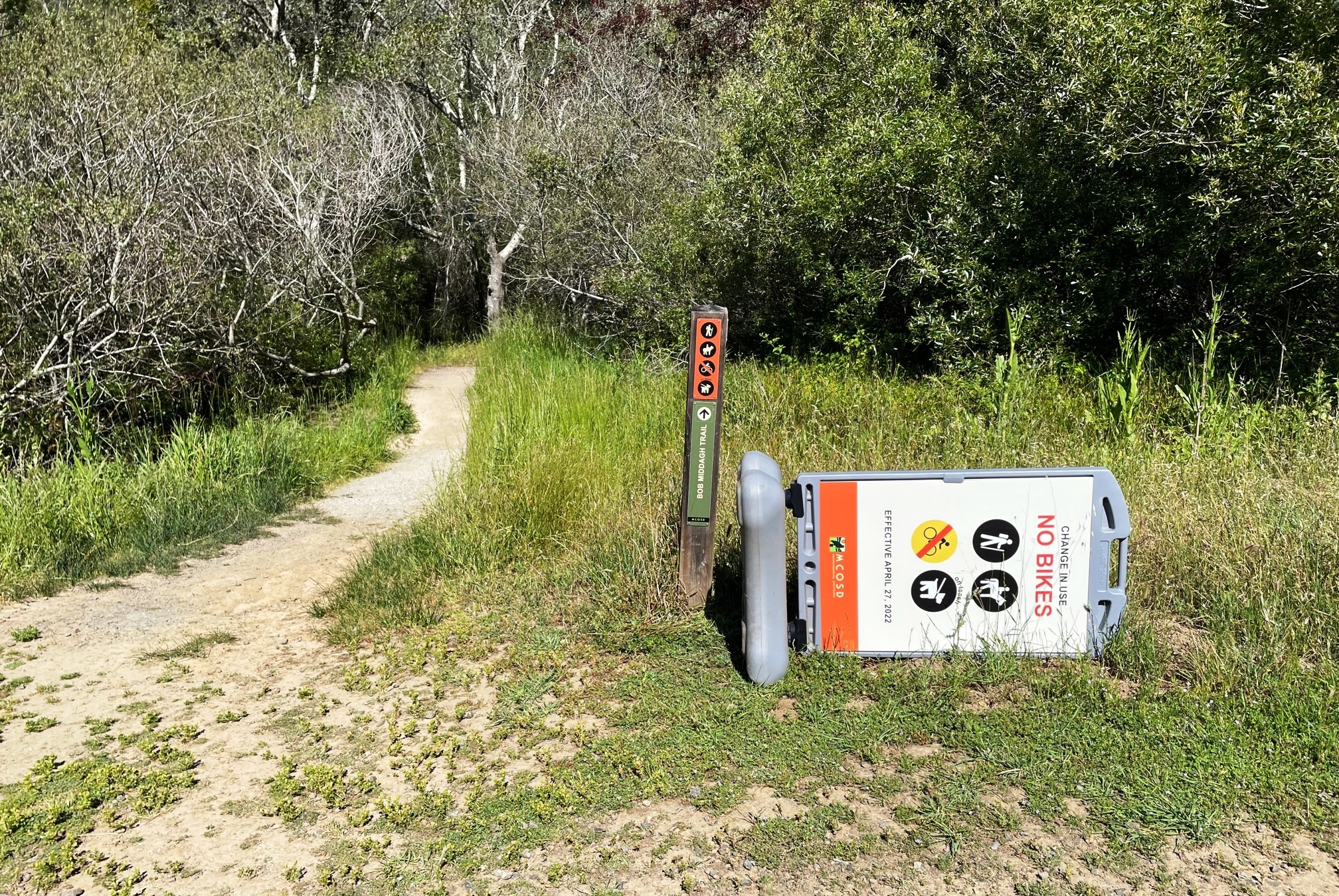 So, what’s going on?

As explained in the April 3rd article, on March 28, 2022, in the San Francisco Court of Appeal’s second review of the Marin County Superior Court rulings in the case of Community Venture Partners v The Marin County Open Space District, Justice Brown reversed and admonished Marin Judge Sweet’s 2021 decision allowing the County to open the Bob Middagh Trail for biking (a decision that blatantly ignored the same Appeal Court’s first ruling in 2020). And since Judge Sweet’s 2020 ruling was immediately appealed, the County knew full well that they couldn’t rely upon anything Judge Sweet had decided to justify their “opening” event in 2021.

They did so in spite of it.

Since the case of CVP v MCOSD came before the Court of Appeal the first time (in 2020), several community organizations have submitted alternative proposals to the County, suggesting changes to existing trails and/or the construction of new trails in the Alto Bowl Preserve to better address the specific goals of each user group: hikers, equestrians, and bikers.

The initial reason given by the County for opening the Bob Middagh Trail to biking was to provide the bikers with an “east to west” connector route across the Preserve. But as a number of the new proposals show, this can be easily (and more efficiently) accomplished by creating a bikes-only east/west route in the southern portion of the Alto Bowl Preserve, where parts of that trail already exist (that are largely unused) and where new trail sections will have no conflicts with hikers or equestrians.

After years of belligerence, one has to ask if the new signs are an indication of a sudden change of heart at MCOSD to become law-biding. After all, for almost a year, the County has been thumbing its nose at the Court of Appeals and falsely claiming that the case of CVP v MCOSD was over and that their decision to allow biking on the Middagh Trail was final.

Or, perhaps, they felt it was now in their self-interest to comply because they realize they'll look pretty dumb if they fail to toe the line as the Appeal Court's decision comes back to the Marin Superior Court for a second time to be enforced.

With the County, it’s always hard to say. But, I’ll say this. Never count the County out. They’ve demonstrated time and again that they have an endless supply of taxpayer funds that they are willing to use to defend any legal challenges for as long as it takes to wear out any normal human being.

It would also be naive to believe that any court ruling will do anything to change mountain biking behavior. But that considered, it would be nice if the County spent more time and money trying to find ways to satisfy the needs of both hikers and bikers in an environmentally safe, non-confrontational way (such as separating hikers and equestrians from bikers on narrow, single-track trails by giving bikers their own, exclusive trails that are not within sight or ear-shot of each other), instead of choosing to remain obstinate in the face of a growing public safety problem (with the introduction of electric-motorized mountain bikes) that is not going to get better on its own.

One can only hope that a light bulb will someday go on at the Marin County Open Space District and they’ll start to take their charge of serving all members of the Marin community, more seriously.