The apartment projects that large multifamily housing developers are building are increasingly generic, boring, ugly, inappropriately sized, and generally unimaginative. To better understand why, we need to look at the history of 20th-century architecture.

In the post-World War II 1940s, society was focused on how to mass produce housing very quickly to serve the growing population and new families across the country. This resulted in an emphasis on utility, cost efficiencies, standardization of construction methods, fungible designs, and economies of scale. This, combined with the 1950s concept of the American white-collar worker, famously referred to as the ‘company man’ (the ‘man of the house’ and 'breadwinner,' who worked at a big corporation, and the 'wife,' the 'homemaker' who raised the kids), produced the templates for apartment design that are still adhered to, today.

Around this time, a famous modernist, Swiss-French architect, Le Corbusier, had developed a mathematical method of proportioning and dimensioning to capture, in his view, all the needs of human beings; a method that could be used to design living ‘units.’

He called it the “Modulor Man” (“Le Modulor”). His “ideal” was an echo of Leonardo DaVinci’s “Vitruvian Man,” (1490), which was also based on a mathematical measurement ideal. 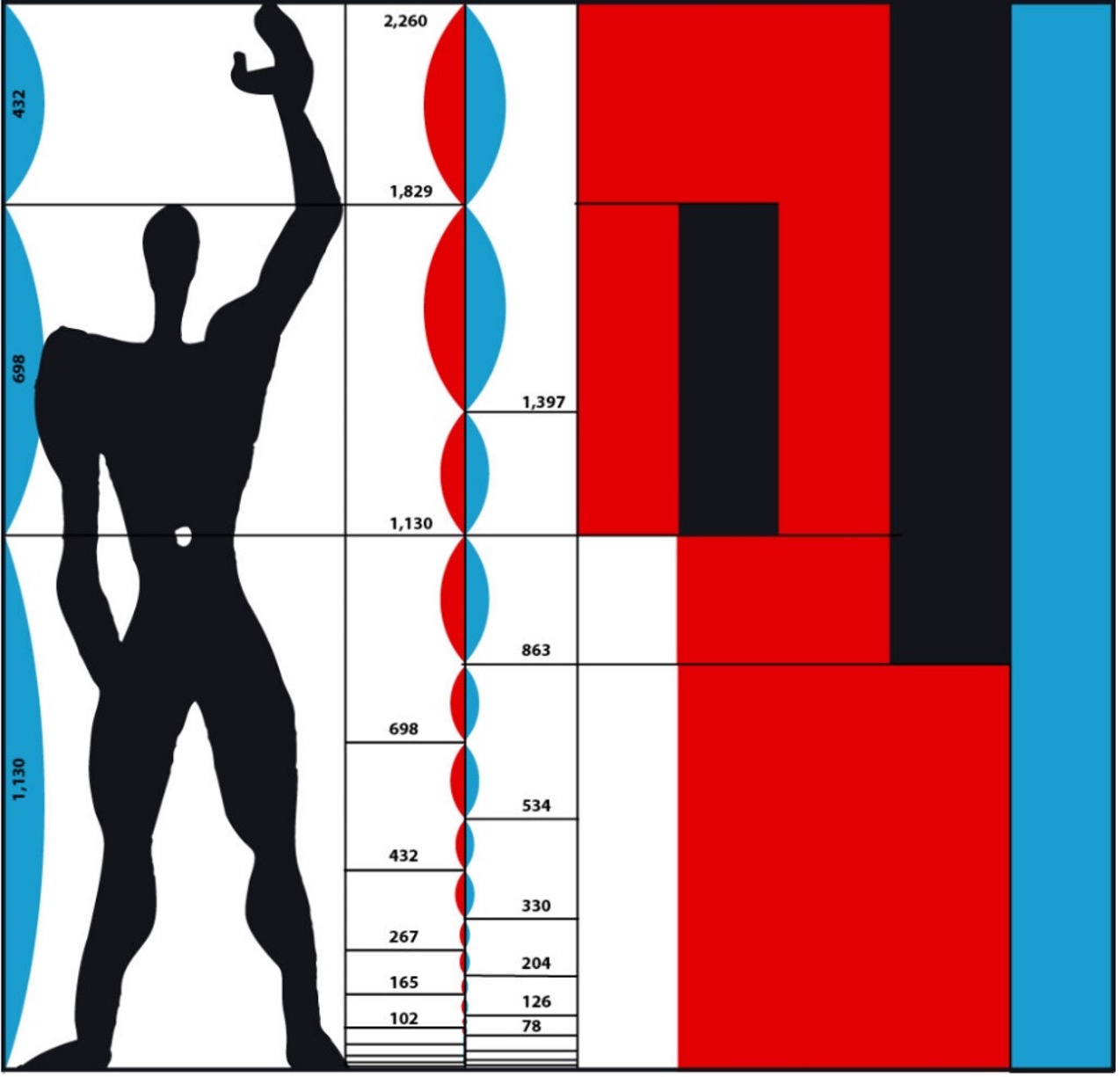 Le Corbusier’s work was in the longstanding Modernist tradition of prioritizing efficiency, utility, minimalism, improving public hygiene, and increasing social equity. As shown in the diagram below, this mathematical formula was, theoretically, applicable to every possible movement and spatial need of the inhabitants of a dwelling.

Initially, there were some truly astounding and innovative designs produced by this concept in the Modern Era’s heyday, such as Corbusier’s unite’ d’habitation in Marseille, France, in 1940. But architects like Le Corbusier, Ludwig Mies van der Rohn, Marcel Breuer, Walter Gropius, and their ilk were rebels and true innovators, not production building designers.

Unfortunately, the distillation of these concepts in America (particularly for multifamily apartment design) was prescriptive, literal, and resulted in an increasingly de-humanized and dehumanizing, lowest-common-denominator, cookie-cutter floor plans and lack of nuance; designs that have been repeated over and over again, regardless of their appropriateness to their location, purposes, or surroundings.

This trend in apartment unit design reached its simultaneous zenith and nadir in the 1960s and 1970s and has pretty much remained the ‘standard’ used by developers of high-density housing ever since.

The tyranny of the rigid thinking described above cannot be underestimated. In the United States, today, production multifamily housing developers think of architecture as just an applied style and consider architects to be either a necessary evil or an obstacle to profits. As such, their goal has been to reduce the role of the architect to that of an exterior decorator or the facilitator of the latest marketing gimmick.

Similarly, the typical, large nonprofit or for-profit developer is driven by a checklist of rigid, unquestioned, statistical ‘norms’ dating back to the 1950s and 1960s that define what a ‘family’ is and what ‘work’ and ‘leisure’ mean: prevailing ideals that end up being no one’s experience in real life, but rather something apartment tenants settle for in the hope of someday living in a ‘real’ home.

Production housing developers have little interest in people's lives and dreams and the governments that subsidize developers with taxpayer money have no interest either. Heaven forbid, a person leads an unconventional or alternative lifestyle, or doesn’t go to an office every day to a 9 to 5 desk job but instead works odd hours or works from home or part-time, remotely, or is a creative spirit or a craftsperson or someone whose life includes a variety of hobbies, side-hustles, and other activities and endeavors.

None of this is considered when developers present multifamily housing proposals (demands?) to municipalities as if life today bears any resemblance whatsoever to the mid-20th century world. And designers who work for nonprofit affordable housing developers are discouraged from including anything that fails to conform to the firm’s ‘cost-effective,’ tried-and-true, templated design methodologies.

This growing homogenization of our built environment is producing an ignorance of what architecture, design, and our everyday lives are actually about and how much good design would improve us, physically, emotionally, psychologically, and I dare say, even spiritually.

To this day, we are still designing housing for ‘cogs’ in a machine. And this is acutely observable in the banal sameness of what is called “urban infill” mixed-use housing. In every town and city in every state, across the country, we see the same cookie-cutter, multifamily housing designs being built, most recently dominated by six-story, mid-rise ‘pedestal,’ faux-Post Modernist designs. 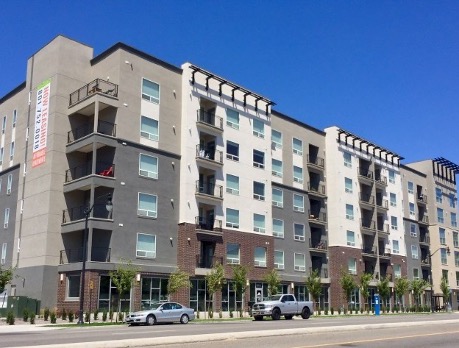 Building for an America that no longer exists

Currently, only 42% of California’s adult population is married and only 2/3 of those have children living with them. The other 58% are single, divorced, separated, widowed, or whatever. Many of these are single parents or in co-habitating arrangements. Of those, recent studies suggest that 22% work remotely and another 15% have a mix of working remotely and working outside the home. Many are gig workers, sole proprietors, small business service providers, entrepreneurs, and ‘working people,’ who do manual labor and trades and need trucks, equipment, and tools to make a living. And the vast majority of this group qualifies for affordable housing.

So, what about their housing needs? California state housing policies simply don’t care. For politicians who are promoting our current housing mandates, these demographic groups are just statistics, not real people.

Demographics have changed, dramatically, in the past few decades. For example, there’s a new class of seniors who could be called the ‘active elderly,’ who fall somewhere between old enough to retire but not nearly ready to consider senior housing communities or need assisted living or nursing care. And their numbers are growing rapidly. And at the other end of the ‘barbell,’ there is a largely un-housed youth demographic that is simply priced out of every major metropolitan housing market in the state. But, neither need the same floor plans and amenities that the other does, or their contemporaries did in the past.

The active elderly want better kitchens and open floor plans for leisure and entertaining, a home office space and a small guest room (for when the kids visit), and perhaps more usable, private outdoor space for plants, pets, and gardening.

The younger demographic is more focused on adequately sized individual rooms (better for cohabitation, having young children, and working remotely), compact layouts, state-of-the-art technological features, multi-purpose areas, and more storage for all their sports equipment and stuff. They are candidates for live/work opportunities, lofts, micro-units, and other, more flexible/adaptive living spaces.

Generally, these demographic also want somewhat different amenities. The active elderly might look for opportunities similar to what some hotels and resorts provide: concierge assistance, shared dining opportunities, exercise classes, a ‘business center’ for copying, faxing, public computers, etc., and locations in close proximity to shopping and healthcare providers. The younger demographic might also value some of these things, but to a lesser extent or in a more robust version, with more emphasis on indoor and outdoor socializing spaces, shared remote working areas, hardcore workouts, and proximity to fast food, nightlife, and entertainment. These are just partial lists.

But no one is presently building enough housing to address either of these growing, non-generic demographics, particularly housing that is actually affordable for them.

So, why is everyone still building the same old apartment designs using the same old apartment floor plans? All we are getting are repetitive, stack-'n-pack, 'decorated,' monolithic, warehouses. And I haven't even mentioned green, 'zero-carbon' construction; a topic that only comes up in pathetic references to minor green-washing accessories and adhering to low-energy code requirements. But, then that's a whole other story about the larger, global, environmental impacts of uncontrolled, large-scale real estate development that neither developers nor state agencies want to talk about.

CLICK HERE to read PART 1: The demise of local control