Sausalito is at risk of losing its working waterfront

The “Marinship” is a large industrial and maritime-zoned area running along Sausalito’s waterfront from Napa Street on the south end to Gate 6 Road to the north. It is a unique and increasingly industrial, manufacturing, artisan, and maritime services hub for all of Northern California and beyond. However, it is currently in jeopardy, because real estate interests are pressuring the Sausalito City Council to re-zone the Marinship for high-density housing and expanded commercial uses. They seek quick windfall profits that can result from re-zoning, regardless of the long-term, negative consequences for the Marinship’s working waterfront business community as a whole or the impacts on the city’s most important tax revenue-generating area.

The Sausalito Working Waterfront Coalition (SWWC), a coalition of Sausalito's Maritime Craftsman, Technology Innovators, Industrial Fabricators, Artisans, and Artists advocating for the protection of our livelihoods, our city's economic engine, and cultural heritage. In March, at The Sausalito Working Waterfront Coalition National Roundtable Event, members of the SWWC and experts from across the country laid out how the loss of local zoning control and poor planning has led to the loss of irreplaceable working waterfronts at an alarming rate.

The loss of working waterfront areas has become a national problem. But the City of Sausalito seems to be uninterested in working to reverse this trend.

For example, in assessing the city’s future need for senior housing, the city continues to rely on misinformation about senior housing demand, which in large part is due to the Sausalito real estate lobby (Marinship property owners and landlords with a vested financial interest in the outcome) pushing a narrative about there being a massive demand for senior housing and senior care facilities, as well as increased demand for more office, retail, and other commercial uses in the Marinship that is based only on anecdotal data presented at the City’s “Marinship Workshop” on September 7, 2019. However, the most relevant data from that meeting, which is not been properly considered, is how participants voted on what uses should be allowed and most protected in the future.

The results if that, regarding the choice of either maritime or senior housing, was,

74% of the attendees voted for preserving and supporting the working waterfront as a maritime, manufacturing, industrial, arts, and artisan’s area, and 26% voted to prioritize senior housing and expanding commercial uses.

Sausalito community members who attended that meeting overwhelmingly wanted to preserve and incentivize a working waterfront that maintains its current maritime, industrial, artistic uses, and its unique historic character.

While senior housing and other commercial uses may be desirable in the city, as a whole, it was acknowledged that demand for senior housing, in particular, could be achieved elsewhere, without impacting the Marinship or displacing its working waterfront businesses.

The Marinship is also not an opportune location for any housing because of its documented risks of sea-level rise, flooding, toxic soils, land subsidence, noise, dust, and fumes created by industrial users. Certainly, valued senior residents and low-income residents should be housed in safer locations.

Meanwhile, development interests continue to promote a reassuring narrative that existing Marinship’s maritime/industrial/manufacturing/artisan businesses will not be displaced by new residential development. But try telling that to the scores of entrepreneurs who have recently been displaced in the Marinship and in similar situations around the country, when residential and mixed-use commercial development was allowed. (See the Gentrification of a Working Waterfront Roundtable Discussion HERE).

The behavior of markets is predictable. Property owners will always seek out short-term profits over long-term community goals. It’s just how our economy works. Market forces will do what market forces will do unless local government sets clear boundaries and supports the existing, local business community. From SOMA in San Francisco to SOHO in New York City, history is filled with examples of how the homogeneous gentrification and development of housing, retail, office space, restaurants, and entertainment venues, collectively, eventually drove out all industrial, manufacturing, and arts and artisan businesses.

The argument that residential development will not displace maritime or industrial or artist businesses is simply false. If this false narrative prevails, irreplaceable, local service providers, innovative entrepreneurs, and a wide range of creative artists and artisans will be priced out due to rising rental rates caused by increased land values. Again, markets will do what markets will do to achieve immediate, short-term gains. Ironically, however, maritime, industrial, manufacturing, and arts and artisan businesses probably have a brighter future in the 21st century economy of Southern Marin than the banal gentrification Sausalito’s current City Council seems to want to allow.

Making matters worse, the City’s ongoing lack of enforcement of existing zoning codes and discussions about the possibility of future re-zoning is already influencing the market and threatening existing businesses, and seriously limiting their ability to thrive. Data from Cushman and Wakefield[1] (below), comparing industrial vacancy percentages to rental rates for industrial properties in the 4th Quarters or 2020 and 2021, provides valuable insight into the impacts the City’s actions and lack of action are already having.

The data indicate that industrial lease rates in the Sausalito submarket ($2.88 per sq. ft.) are now more than double those in any other city in Marin and more than double the Marin County average ($1.26 sq. ft.). Yet, data from just one year earlier indicates a lower lease rate in Sausalito and a higher vacancy rate (0.3% 2019 vs. 2.4% 2020). 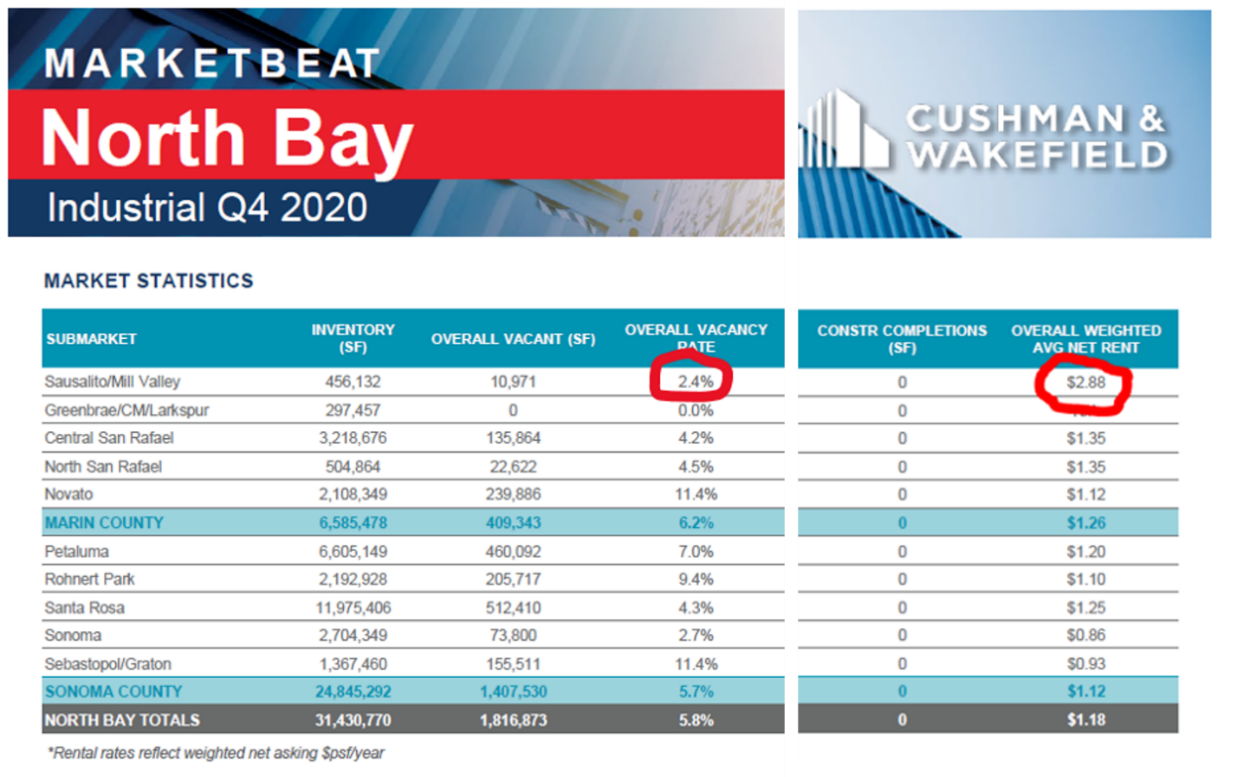 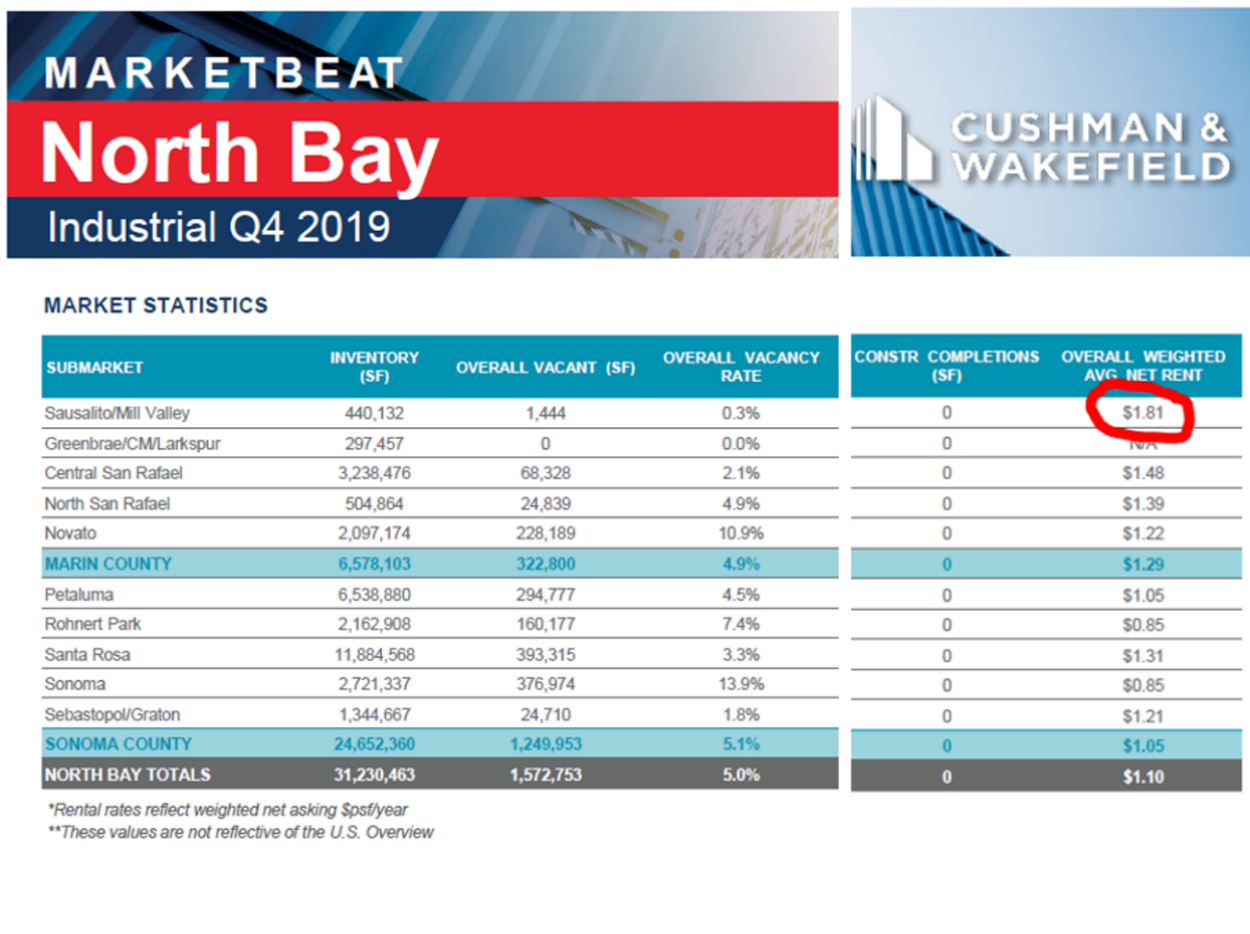 So, what the Cushman & Wakefield data would indicate is that as month-to-month renters shut down or lost their leases from 2019 to 2020, and as vacancies rose, landlords almost doubled their asking price per square foot.

One wonders why lease rates didn’t decrease, instead, in an attempt to hold onto existing renters or to attract new businesses as the pandemic progressed. But that didn’t happen. The only explanation is that the landlords would rather let the properties remain vacant rather than be tied to longer-term leases, effectively holding their properties off the market in anticipation of up-zoning to residential or increased office/commercial use, and redevelopment opportunities that will pay much higher lease rate.

This is a well-known phenomenon in real estate markets. With a month to month tenants, landlords are in a better position to quickly take advantage of any changes in use, or conversely, if they believe that changes in allowable uses are imminent, they have no incentive to offer anything but month-to-month leases. However, being on a month-to-month lease is arguably the biggest deterrent there is for a City to attract long-term business investment and capital investment.

This creates a vicious cycle of increasing vacancy, loss of tax revenue, reduced property upkeep, and other investment disincentives that will eventually destroy the viability of the local business community. But, our economic system being what it is, those same landlords that are only offering tenants month-to-month leases, will inevitably use their “loss of revenues” as an excuse to promote wholesale redevelopment and the demise of Marinship’s existing maritime, industrial business community, to increase their return on investment.

This is not just theoretical.

Last year, one of the brightest stars in the Marinship, Engineered Fluids, a company that developed a patented non-toxic lubrication fluid (and provided 45 gallons of free hand-sanitizer to our Sausalito community during the pandemic) had just received new investment funding and was about to hire 15-20 new technicians and engineers: good, high-paying jobs for Sausalito. Instead, when their month-to-month lease expired, it was not renewed and the landlord was able to find another tenant for that industrial space that paid more than double, but had no long-term plans to invest in or use the industrial-zoned space for its intended use.

Engineered Fluids was unable to find adequate industrial space in the Marinship that had not been converted to office space and had no other choice than to leave Sausalito. 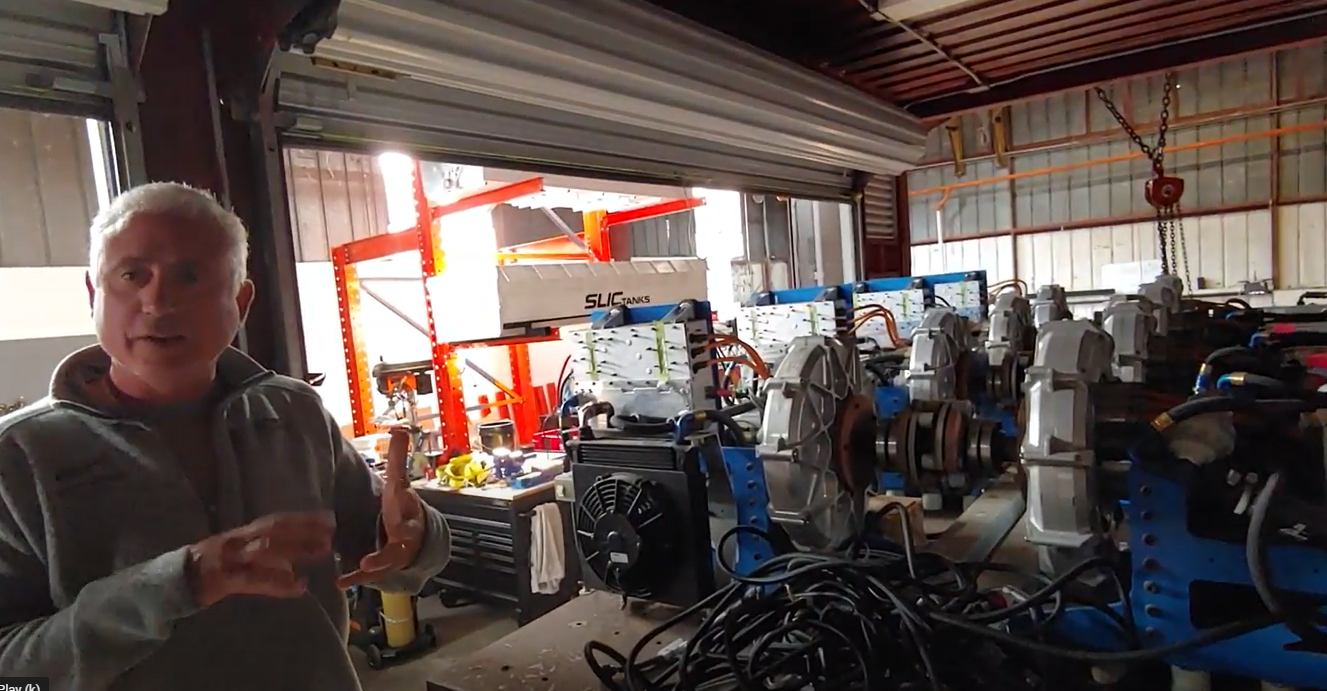 The space is now being used for private parties. The only gesture to Marinship’s maritime heritage in the space is a duckboat, brought in from the Northwest, that sits, trapped in the space converted to an entertainment center and DJ booth, surrounded by a pool table, grand piano, archery targets, and sofa lounge, like a dancing bear at a circus.

As another example, 2 weeks ago the Marinship lost an innovative 3D printing business. The startup company was making plastic parts running dozens of 3D printers, 24/7. Demand was rising for its products and the operation needed about 1200 additional square feet, enough space for 100-150 printers. 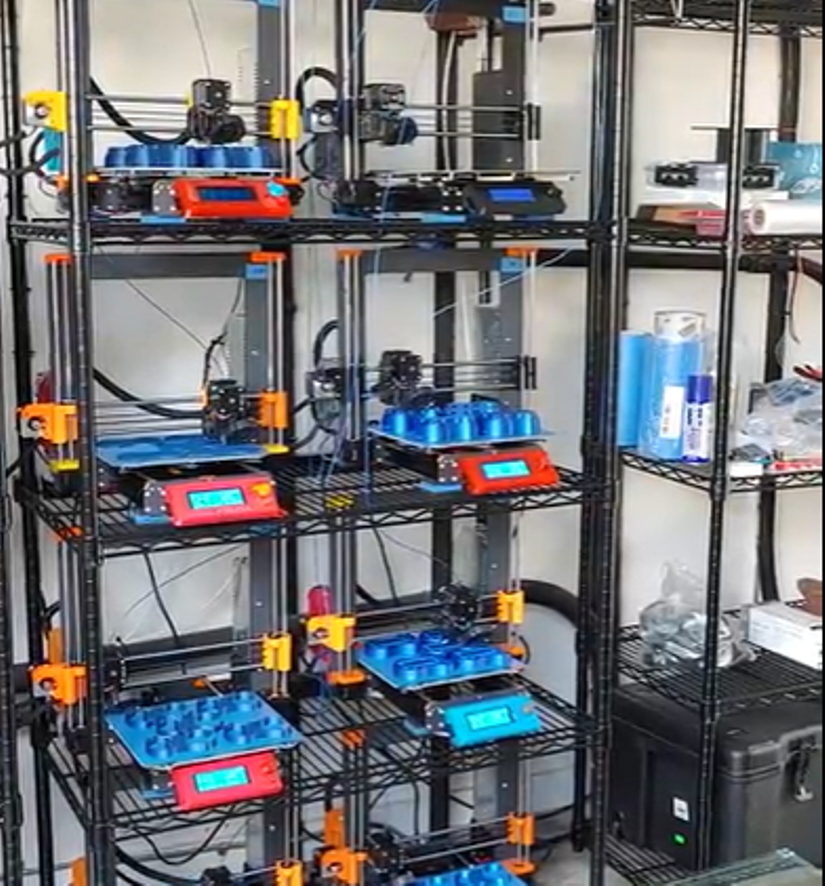 The vacant space available in the Marinship with adequate power to run the operation was priced nearly 80% higher than the Marin average. Unable to find suitable space at a reasonable price, the company left the Marinship 3 weeks ago.

While we hear that the real estate lobby condemns these examples of the Marinship losing new, entrepreneurial businesses, at the same time the same landlords continue to raise rates to levels that ensure that no local, maritime, industrial, manufacturing, or arts workspaces can afford them. Markets will do what markets will do unless the City takes a stand and provides incentives to protect the viability of Marinship’s maritime, industrial, and arts, and artisan businesses, and to attract similar businesses in the future.

[1] Note that in the Sausalito/Mill Valley submarket, almost all the industrial zoned parcel are located in the Marinship in Sausalito.

John DiRe is a member of the Sausalito Working Waterfront Coalition. He served on the Sausalito General Plan Advisory Committee from 2018-2020 and currently serves on the Economic Development Advisor Committee.