Look at his remarkable graphic. 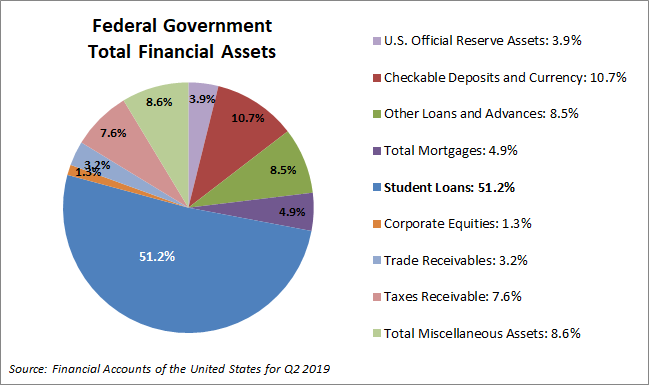 Yes, you are reading that correctly. Student loan debt now makes up over 50% of what our federal government calls financial "assets," which in the old days meant things of value (not including, land, buildings, etc.). So, one has to wonder how the $1.3 trillion dollars in student debt will be forgiven, as many presidential candidates suggest, without consequences that will trickle or perhaps pour down on highly leveraged states like California.

Even more remarkable is the fact that almost all of this debt has accumulated since 2007. In fact, it's gone up over 1,000% since then. 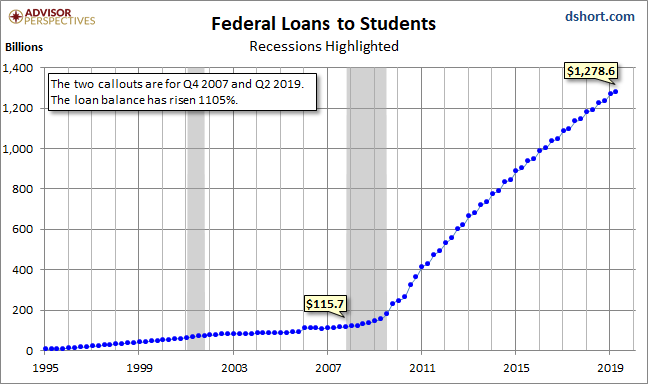 The implications of this are not even on anyone's radar at the moment in California. Sure, it's primarily a federal problem. But the question is are these really "assets" (because they represent a promise to be paid) or are they a liability (because they can default en masse)?

Most of this debt has been syndicated and sold to private investors, insurance companies, and, yes, pension funds both public and private. As noted by Investopedia,

"After a loan is originated, however, it represents an asset that can be bought and sold on the market. Banks are often incentivized to move loans off the books and sell them to another intermediary because doing so instantly improves their capital ratio and allows them to make even more loans. Since almost all loans are fully guaranteed by the government, banks can sell them for a higher price, because default risk is not transferred with the asset."

So, what happens to all those already grossly exaggerated pension portfolio annual investment return projections if these investments (carrying high interest rate returns) are suddenly paid off and need to be replaced by lower yielding bonds -- the best scenario -- or worse, are suddenly in default and the private, intermediary bond derivative companies that have packaged and sold these loans to them also go belly-up? That will call for another taxpayer bailout and the commensurate far-reaching impacts.

Some people are concerned about the economic impacts of all this even in the best case scenario. As noted by Meta Brown, Andrew F. Haughwout, Donghoon Lee, Joelle Scally, and Wilbert van der Klaauw in their recent analysis,

"Student debt continues to make headlines because of its high balances and high rates of delinquency and default—troubling issues that we discussed in our previous posts this week. A less prominent, but still important, issue is the pace at which former students are—or are not—paying off their debts. This issue is important to borrowers because the longer they take to repay their debts, the more interest they accrue, the longer they have to worry about making payments, and the longer they have to deal with the consequences of unpaid debts. It’s also important to the macroeconomy because longer repayment periods mean that a large number of young adults may have their spending and housing purchase decisions constrained by student debt (and widespread delinquency) for many years, even if they eventually qualify for some debt forgiveness." [Emphasis added]

Yes, the feds can always print money and the state can raise taxes and fees to cover pension plan defaults, but that's not without its own social and economic consequences, either.

Economies like California's, which are already over-extended and highly dependent on unending growth of taxes and fees, are more at risk of the financial hiccups something like this could cause.