Climate change is at an irreversible tipping point. California aspires to be a leader in the fight. But California’s purveyors of “clean energy” are blinded by their own marketing and magnifying the problems of rising sea levels and wildfire fuel growth.

So, why aren’t local officials, who participate in or are considering joining a CCA, questioning MCE’s (and other CCA's) practice of hiding the fact that they are damaging the environment by purchasing low-cost dirty energy rather than spending the premium on delivery of actual renewable energy to their ratepayers?

Because it takes more time and expertise than a local official can normally muster to understand the intricacies of the energy business.

Municipalities with “Climate Action Plans” need to pay attention if they want their municipality to make an actual environmental contribution that achieves what is represented by CCA sales people whose incomes are maintained by enrolling municipalities into MCE with no-problem representations.

Feel-good proclamations and CCA's ginned carbon emission numbers will not save the environment.

However, you, the consumer, can lead the way by your choices and by contacting your local representatives and letting them know how strongly you feel about actual protection of the environment.

Sold by Shell Oil and REC brokers, RECs are little more than paper receipts that are disassociated from the actual production of the clean energy they are said to represent as having been produced.

There is actually a market whose sole purpose is the trading of RECs (receipts) to agencies such as MCE so they can continue to buy or produce dirty power under veiled secrecy that is beyond notice of typical consumers.

In 2017, for example, MCE re-sold 90,000 unbundled RECs (PCC3) to ratepayers it identified in its regulatory filing -- Power Source Disclosure, Schedule 1 (highlighted yellow), and 458,046 firm-and-shape RECs (PCC2) (highlighted red) -- highlights may be viewed by clicking this link.

For readers who want to get into granular details, PCC2 volumes map to MCE’s 2017 RPS Compliance Report (click this link).

Here’s how CCAs re-label the dirty energy as “clean”

Because RECs are not actually energy, but instead certificates that are said to represent energy, MCE purchases and supplies low-cost system power and delivers that, while telling you it’s the clean energy (wind, biogas, biomass, etc.) identified on the REC receipt it purchased from Shell or a REC broker.

All CCAs engage in this re-labeling of dirty power as “clean energy.” [footnote 1]

GHG emission intensity, pounds of CO2e (equivalence) per megawatt-hour, tells consumers how clean their energy is compared to other energy suppliers. The metric is akin to the automobile industry’s “Miles per Gallon.”

For calendar year 2017, the most recent year of available data, MCE advertises its GHG emission intensity rate for its default Light Green product -- 95% of MCE’s total energy sales -- is 114 pounds. If that were true, MCE's energy mix would be among the cleanest energy supplies in the country. 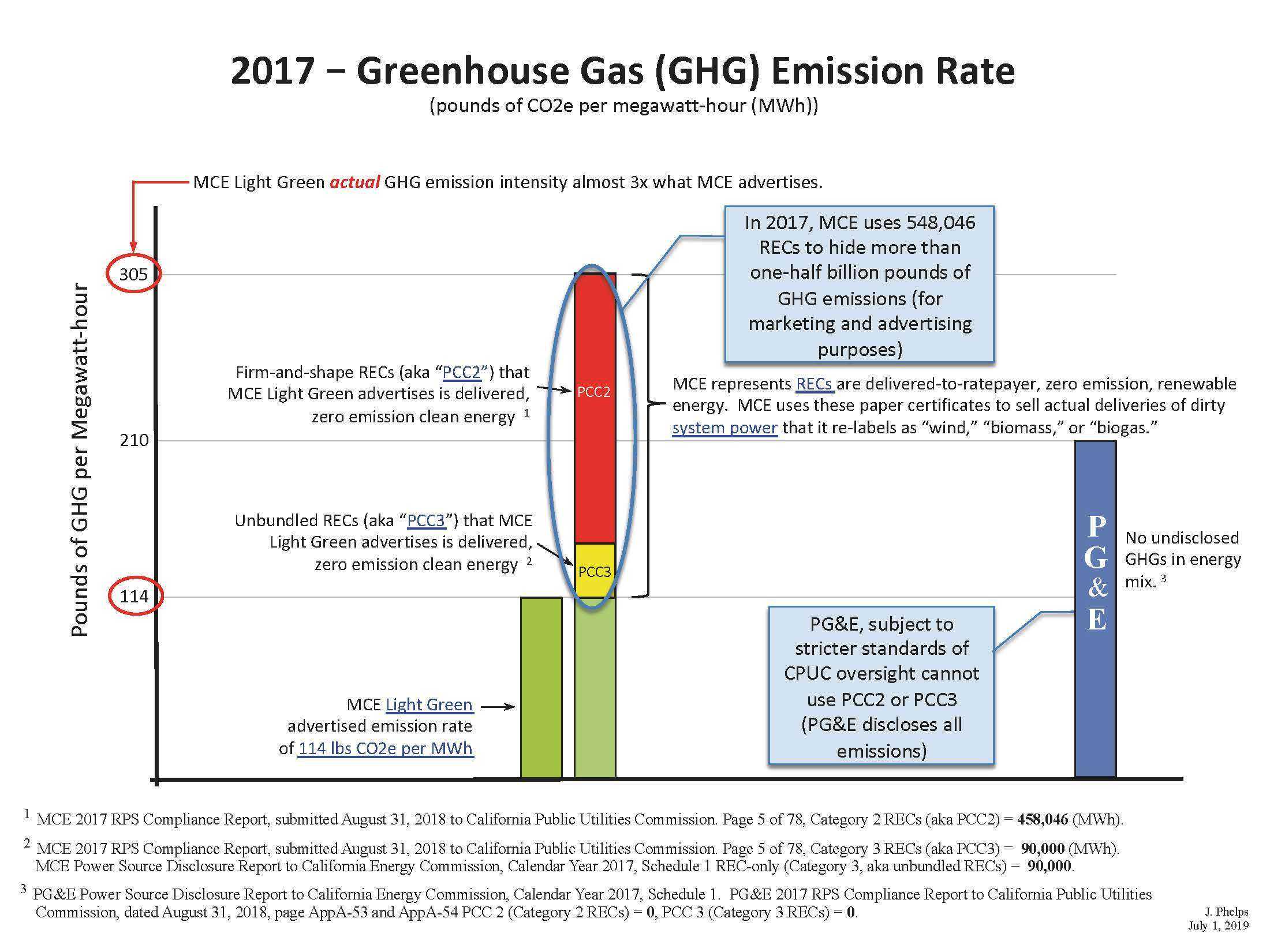 MCE's actual GHG intensity includes the GHGs in system power (fossil-fired). This correction is applied in the charts, above and below, in conformance with AB 1110 (standardized GHG emission accounting law - to be implemented in 2020), while MCE misleadingly reports to ratepayers the zero-emission renewable energy type printed on its REC receipts. The data in these charts is sourced directly from MCE's regulatory filings: MCE's 2017 Power Source Disclosure -- Schedule 1, and MCE's 2017 RPS Compliance Report. 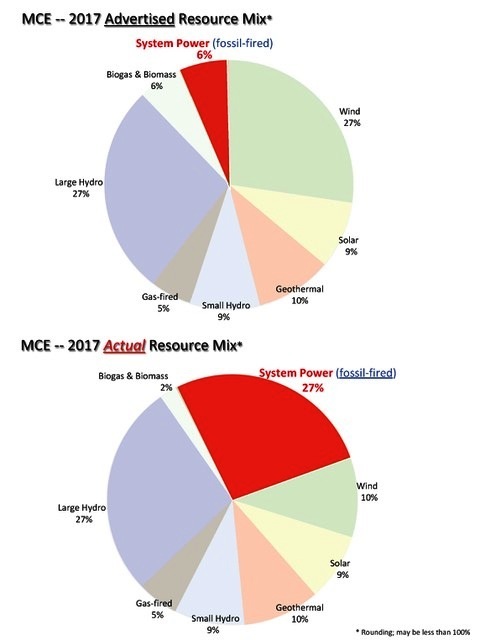 Ironically, MCE's abuse of RECs causes MCE to be one of California's biggest fossil-fired energy consumers, on a per ratepayer basis.

Neither PG&E nor Southern California Edison engage in these REC accounting and mislabeling schemes. They are not allowed due to CPUC oversight.

During the third enrollment phase at the City of Richmond, known as “Phase 2B,” rather than employ the statutory minimum four (4) Opt Out postcards (junk-mail), MCE mailed four “more visible” formal letters, plus a fifth letter.

This clearer communication resulted in Phase 2B Opt Outs spiking 50% compared to MCE’s prior Opt Outs (Opt Outs increased to 30% from MCE's typical 20% Opt Out rate).

For Richmond’s next enrollment phase, and all other enrollments at other municipalities, MCE reverted to four (4) Opt Out postcards, which are more easily discarded with a household’s daily bulk mailings from roofers, solar electric contractors, window replacement contractors, and miscellaneous coupon suppliers.

MCE has not repeated this informed consumer choice noticing.

Elderly consumers remain among the most vulnerable to MCE’s carefully scripted Opt Out processing, operated by MCE contractor Calpine, which is in conflict of interest.

Action you can take

If you believe in transparent, value-based actual delivery of renewable energy you can Opt Out of MCE at https://www.mcecleanenergy.org/optout/, or by calling 1 (888) 632-3674.

You will need three things:

-- patience if Opting Out by phone (you will be subject to marketing, advertising, and a “survey” during the call -- some calls are disconnected);

-- a notebook to write down representatives' names and your Opt Out confirmation number.

This action will not protect your municipality from becoming entangled in MCE’s (or any CCA’s) multi-million dollar power purchase contracts should your town or city attempt to depart the CCA Joint Powers Authority.

Nor will your action protect your land and property from eminent domain claims made by MCE (or any CCA).

Jim Phelps is a consumer advocate, specializing in energy issues and CCAs. Before retiring he was a power contractor and utility rate analyst. He consults municipalities who are considering the merits of CCA and the accrued effects on municipal Climate Action Plans. He is a contributor to the California Energy Commission's AB 1110 Implementation Rulemaking.