RHNA and ABAG demographic projections are way too high

California agencies make demographic projections that are way too high. They result in housing units to be developed that are also way too high.

The sequence of demographic projections and their implications work as follows: 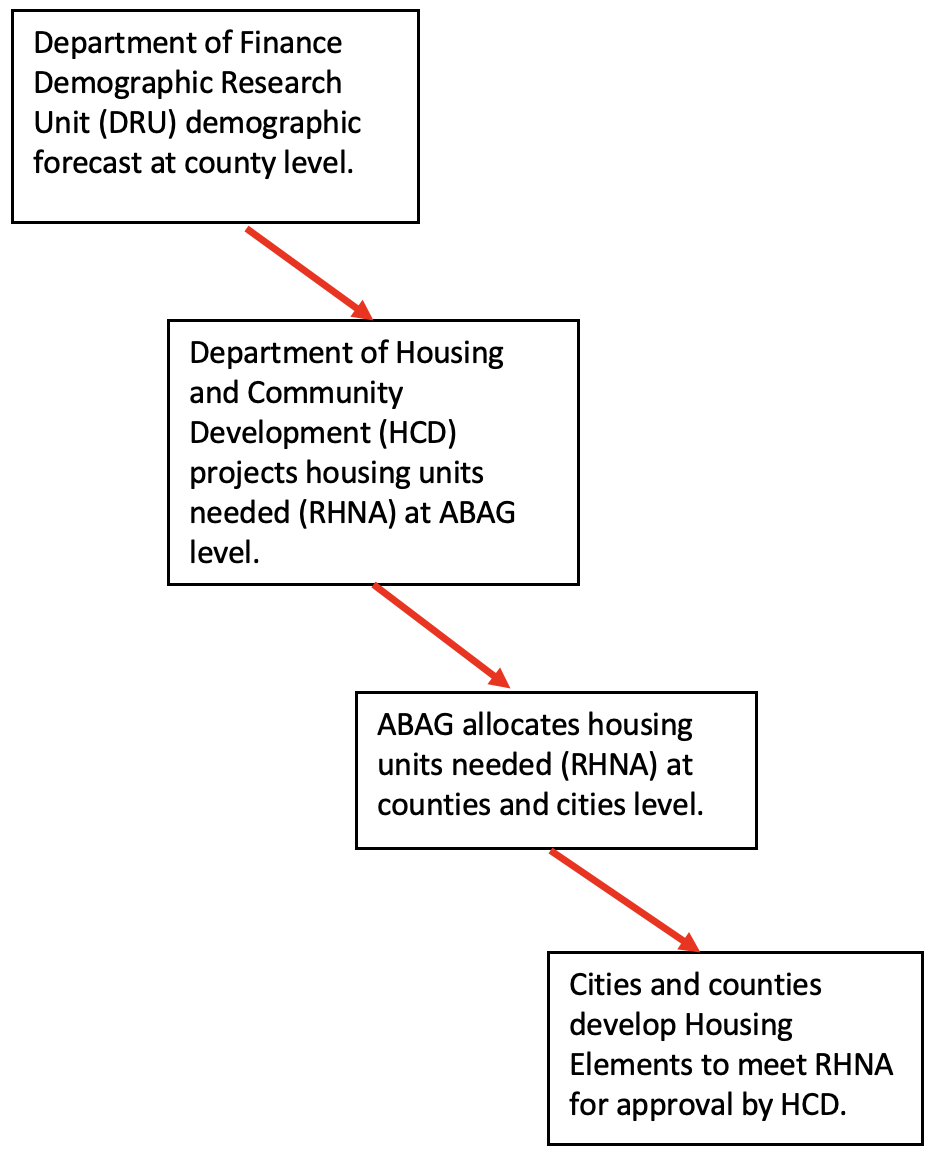 Focusing on the San Francisco Bay Area, I will review the following demographic forecasts:

But, first, let me convey basic concepts in demographic growth so we can understand and assess the validity of the mentioned demographic projections.

The scatter plot below shows the median age on the X-axis and the demographic growth on the Y-axis for the most recent year available (2021) for various countries and regions. 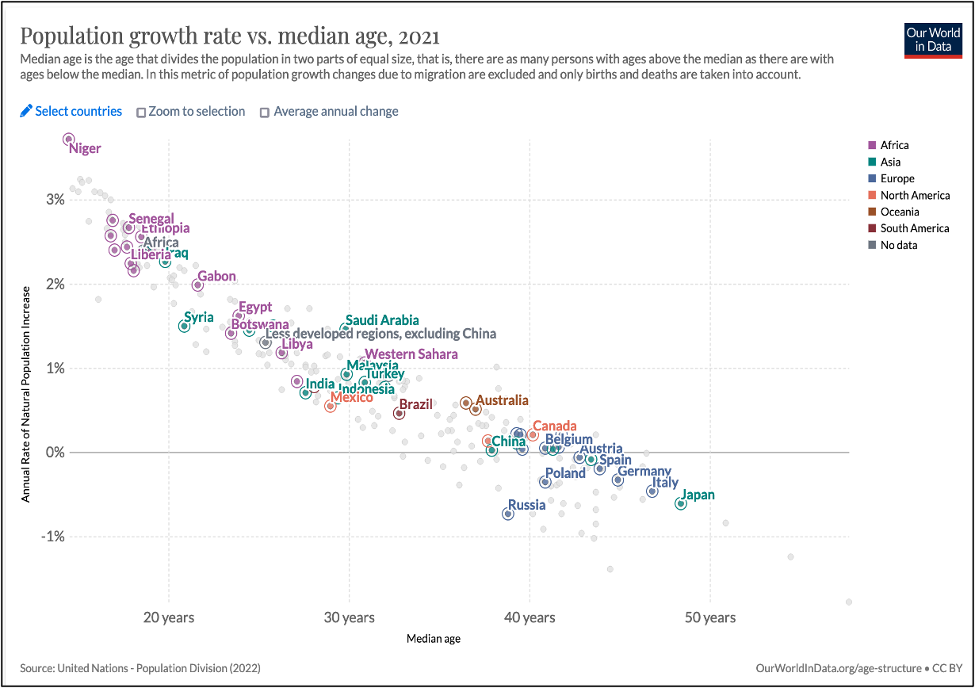 Only countries in Africa and the Middle East are associated with population growth of 1.00% or more per year. At such a rate, this means a population that doubles every 72 years! Similarly, these same countries have very young populations with typically a median age of 30 or less.

US and Canada have at present population growth not much above 0.00% associated with much older populations fairly close to 40 years old.

Meanwhile, just about all of Europe, Japan, and Russia are already experiencing declining population growth and have much older populations.

Focusing on the US and Japan only is pretty informative. 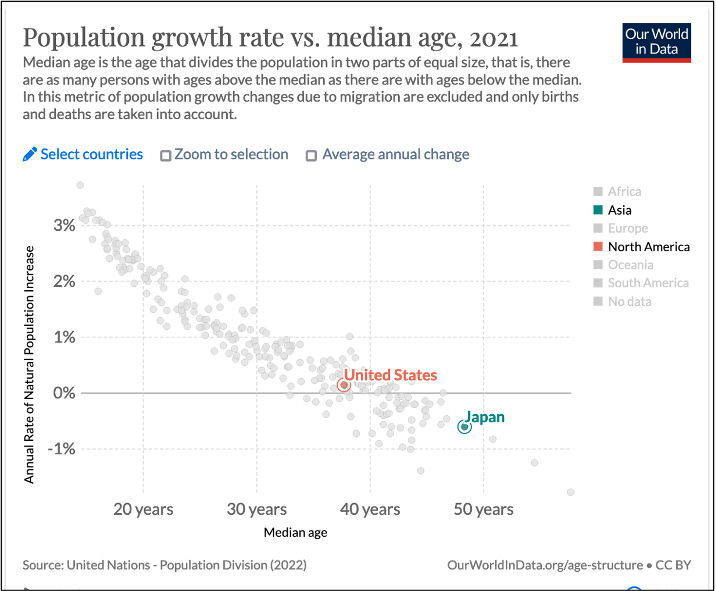 Some of the Bay Area counties, Marin County in particular, look a lot more like Japan than the US. Marin County has already experienced negative population growth over the past 5 years. And, its population is rapidly aging. Its median age is now 46.9 years, very close to Japan's.

An old median age entails a low fertility rate and low or even negative demographic growth. The logical negative relationship between median age and demographic growth is explicitly visible on the scatter plots above. Within those plots, you can easily draw a regression trend line with a negative slope. The resulting regression would have a very high R Square, very low standard error, etc. This denotes the strength of this negative relationship.

On the map below, you can observe that the Bay Area counties typically have a much older median age than the National median of 38.8 years. 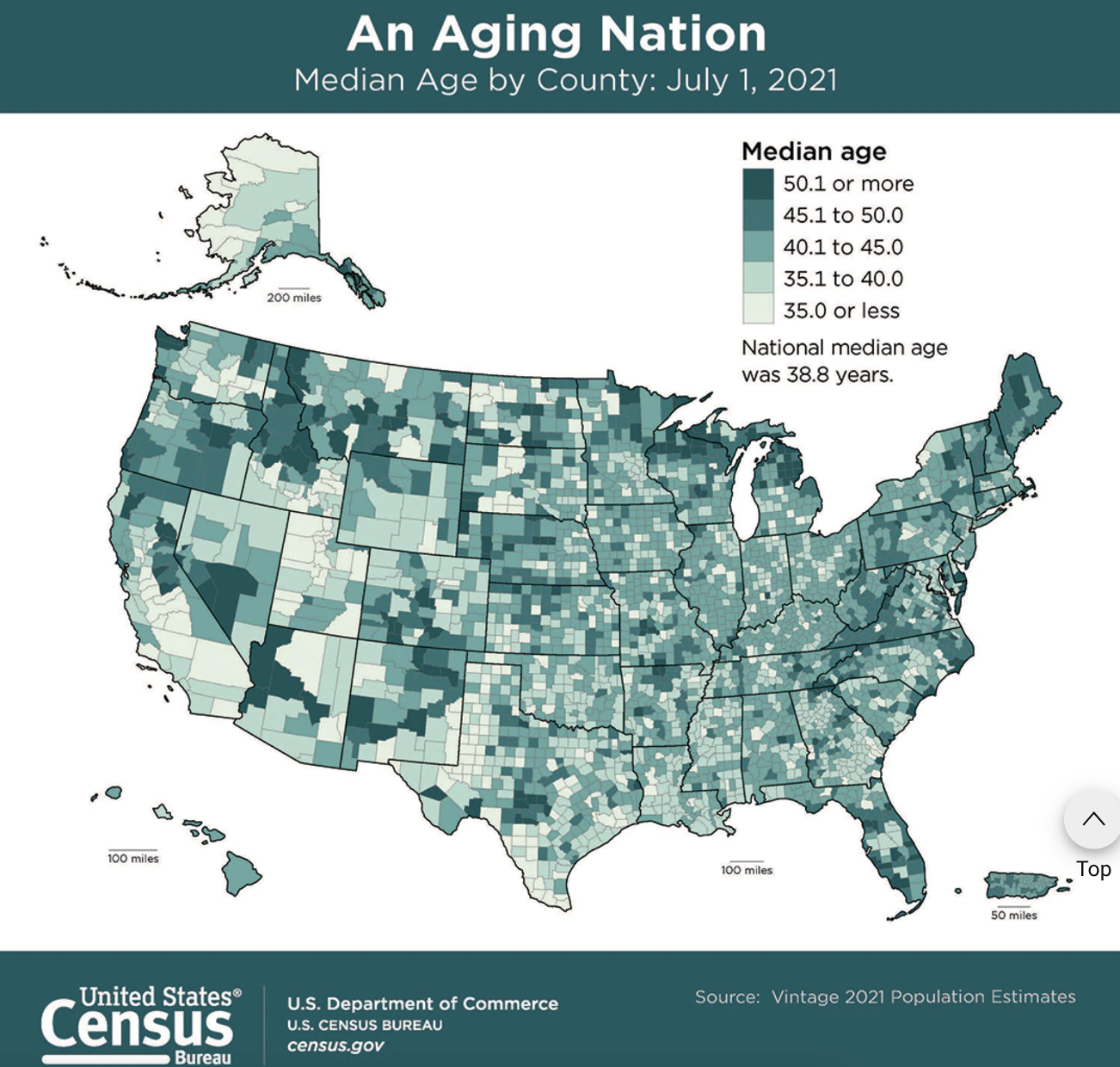 Next, let's look at migration patterns for the two most recent years of available data from the US Census.

You can observe that during the two reviewed years, the Bay Area counties were among the ones who experienced the most rapid rate of out-migration. The Work-From-Home (WFH) phenomenon has had a profound and most probably permanent impact on the Bay Area population. Because of WFH, employees do not need to work at big tech companies' headquarters located in the Bay Area. Similarly, the mentioned companies can save a ton in expenses by hiring talented employees nationwide who WFH. By doing so, the big tech companies save much on salaries and even more so on office space. This may be a permanent shift that is very unlikely to fully reverse itself.

Given that the Bay Area is associated with a much older population (lower fertility rate) than the US, we can expect its natural growth rate to be much slower than the US.

Given the WFH phenomenon, including the recent out-migration trends experienced within the Bay Area, we can expect the Bay Area to grow much slower than the US.

We will look at US population projections from the UN Population Division. This organization includes a leading demographic team not affected by any Sacramento pro-growth bias. Also, when working on a country-level scale such politically driven State level housing mandates become less relevant.

Of the three organizations conducting demographic forecasting (DRU, HCD, ABAG), DRU is the most grounded in demographic trends. It is less influenced by Sacramento's pro-growth agenda.

So, what can we say about DRU 2030 population projections? They are already much too fast. 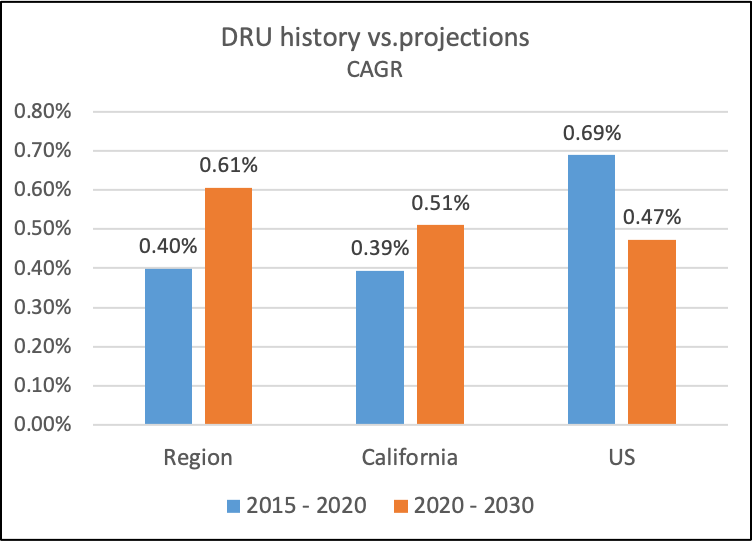 Notice that the UN forecast for the US captures current demographic trends (ongoing aging, drop in fertility rate, etc.). And, the UN forecasts that the US population's annual growth rate will drop from 0.69% over the 2015 - 2020 period down to 0.47% during the projected 2020 - 2030 period.

Why would the Bay Area grow 30% faster than the US going forward while it grew 42% slower in the recent past? The sensible answer is that there are no reasons that support the DRU forecast. The DRU forecast is too high. This is especially true if you consider updated current Census data as of April 2020 and July 2021 showing the early impact of COVID and WFH on the Bay Area.

The table on the left shows the impact of COVID and WFH on the Bay Area. All 9 counties experienced population contraction between April 2020 and July 2021.

To keep things in perspective, you can't blame forecasters for not factoring in future events that were not captured in the historical data (COVID, WFH) they work with. But, you can blame them for not revising and updating their forecasts.

While the DRU makes a reasonable effort to come up with a sensible demographic forecast, the HCD has a strong Sacramento pro-growth housing mandate bias. Through a bit of alchemy, they turn the DRU population projections into extremely high housing units needed to be developed by 2030. See below the output of the HCD 2030 forecast for the San Francisco Bay Area counties in aggregate. 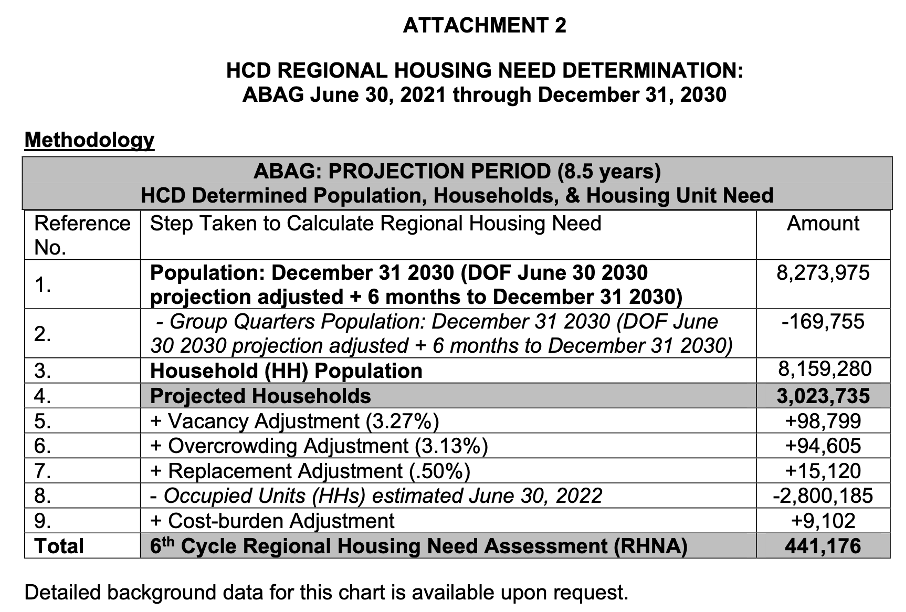 I have contacted the HCD and I suggested three corrections.

The second one is to correct for the double counting HCD inserts when factoring vacancy and overcrowding adjustments that are already factored within the DRU projections, as studied by Gab Layton, Ph.D. I am attaching her work to this article (Double Counting.pdf). Eliminating double counting further reduces RHNA by another 158,176 housing units. So, now the adjusted RHNA is down to 100,267. Also, notice that even though HCD is deemed to use the population and household forecasts from DRU, the HCD household forecast is substantially higher than DRU. HCD seemed to have further boosted the household number by shrinking the average size of household from 2.77 for DRU to 2.74 for HCD. Doing so, increased HCD households by 34,620 over DRU's figure.

The third adjustment a demographer would consider is revising the underlying population growth estimate. The Bay Area's population per Census data was 7,582,582 on July 1, 2021. In turn, the DRU and HCD project that this population will grow to 8,273,975 by 2030. This corresponds to a CAGR of 0.97% which is way too high. Again such a growth rate is pretty much nonexistent within the developed world. You have to go to Africa and the Middle East to get such growth rates. Also, this growth rate is far higher than the projected one for the US overall.

The Bay Area is just not going to grow so much faster than the US. Instead, given the Bay Area's aging demographic profile and out-migration current trends it is most likely to grow a lot slower than the US.

Once you adjust the RHNA housing units needed by 2030 for all three corrections mentioned above (correct household starting point, double counting, slower demographic growth), you get to an RHNA figure that is getting pretty close to Zero... instead of 441,176. This confirms that the RHNA housing unit target for the Bay Area is driven by Sacramento's pro-growth agenda that has nothing to do with the actual demographic and migration trends affecting the Bay Area.

This forecast is independent of the first two (DRU 2030 and HCD 2030). It is the most detached from any demographic realities. ABAG's demographic projections focus on households. Meanwhile, the other projections I use for comparison (DRU for California and UN for the US) focus on population. When looking at demographic growth rates, whether one looks at household growth or population growth does not make that much difference. So, when focusing on actual growth rates, the two demographic units are readily comparable.

The table below compares the demographic growth between 2015 to 2050 for the San Francisco Bay Area region as projected by ABAG (left) vs. DRU (right). As benchmarks, it also includes DRU projections for California and the UN projections for the entire US.

Below, I just summarize the main growth metrics from the table above.

As shown above the San Francisco Bay Area Region - ABAG projections stand out. If the UN projected the US would grow as fast as the San Francisco Region as forecasted by ABAG, its population would increase from 324.6 million in 2015 to 490.1 million in 2050, instead of the 375.4 million projected by the UN. This divergence reaches an absurd level.

As mentioned earlier, every demographic characteristic (population aging, out-migration, etc.) suggests that the San Francisco Region will grow a lot slower than the US instead of more than 3 times as fast. The ABAG's forecast is truly unhinged. It confuses the San Francisco Bay Area with an African or Middle Eastern one. No other developed regions in the world grow as fast as the projected growth rates by ABAG.

Six years into the ABAG forecast, we can already observe that it is way off. From 2015 - 2021, the Region has lost population for the mentioned demographic reasons (population aging, out-migration, COVID, WFH). 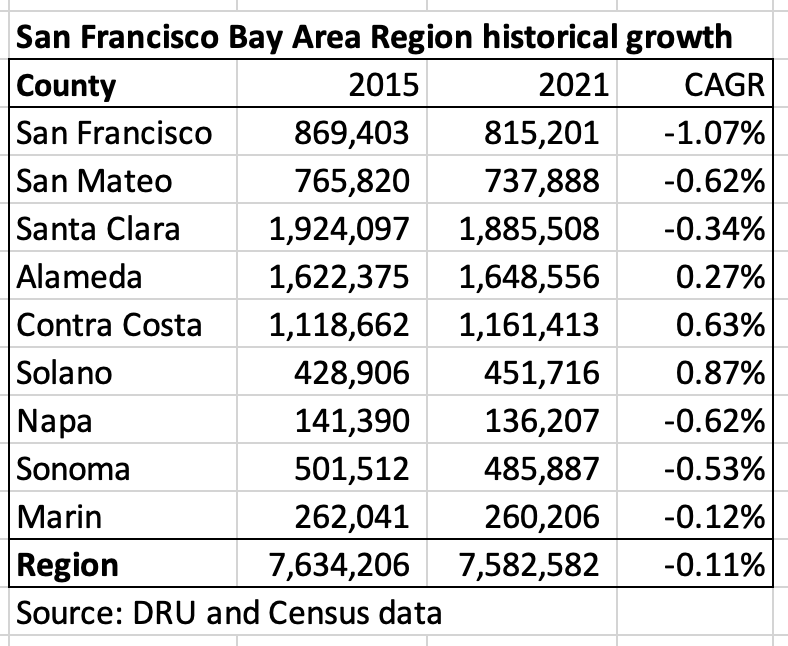 I have communicated with the various agencies suggesting revisions to their respective forecasts. Although the respective staffers were courteous and communicative, the agencies had no interest in correcting their forecasts. Regarding HCD in particular, the error in the forecast has drastic implications for the RHNA housing mandates, Housing Elements, etc.

Many others have communicated similar concerns regarding these flawed forecasts without ultimately having any influence on the agencies revising such forecasts. That is a State and Local level governance concern.

In California and the Bay Area, in particular, we are at the hi-tech cutting edge including AI, etc. Yet, when it comes to straightforward demographic forecasts our State Government at all levels pretty much ignores the science and the simple math to impose dictatorial housing mandates.