Are we in a drought or a flood?

The word "drought" has various meanings, depending on a person's perspective.

The NOAA US Drought Monitor still believes Marin County is experiencing a drought. See four maps below from the NOAA Drought Monitor that disclose drought conditions throughout California since January 2020. 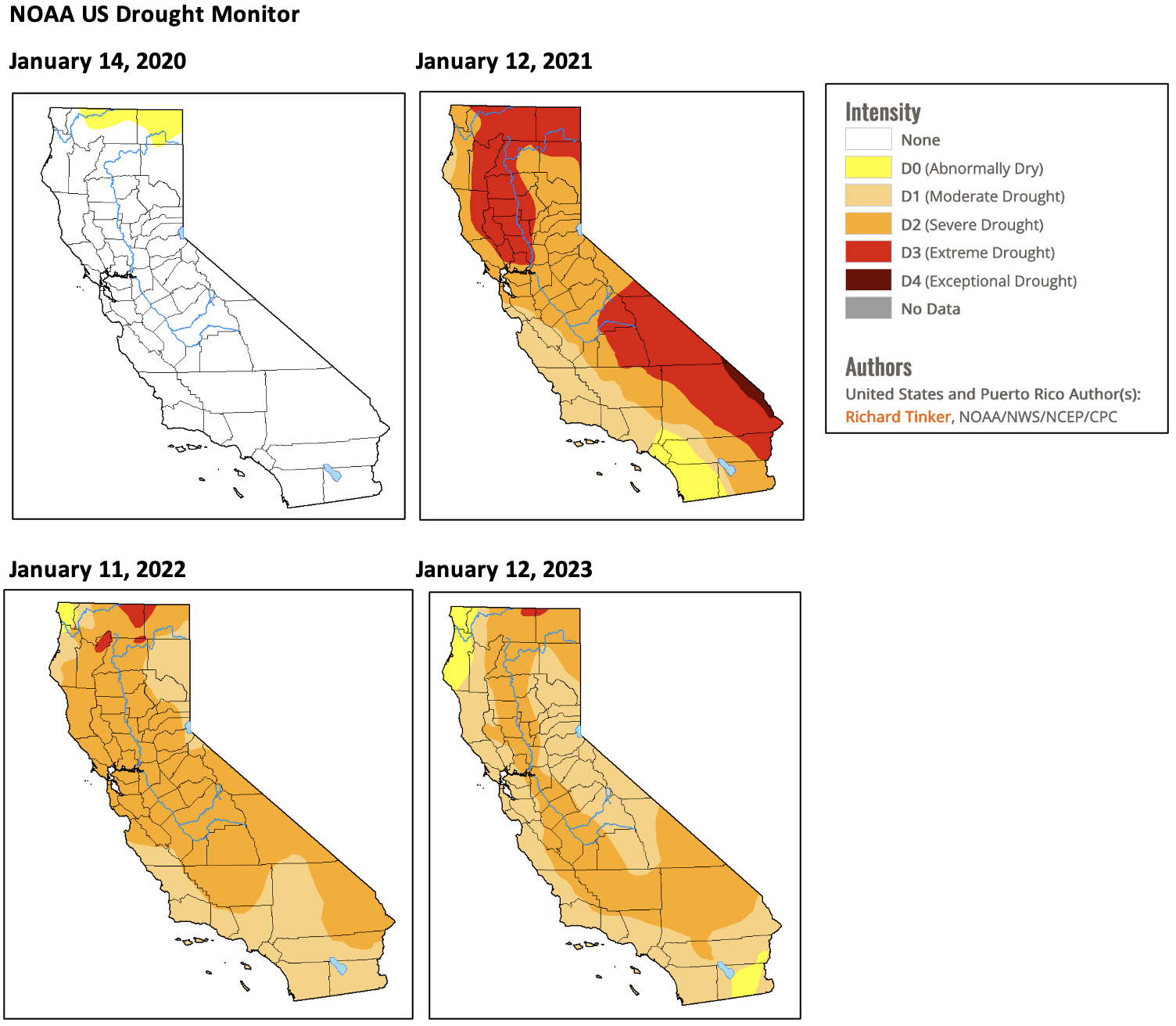 The NOAA US Drought Monitor is way off regarding Marin County

However, as you can see in both January 2022 and January 2023, the NOAA Drought Monitor is way off. It still considers that Marin County is in a drought. Yet, during both periods on a water year-to-date period, we got a heck of a lot more rain than usual. Last year, the MMWD reservoirs were 95.2% full, or 121% of the average for this time of the year. As we speak, the MMWD reservoirs are full and overflowing.

There is no data that supports the NOAA Drought Monitor assessment that Marin County is currently in a drought (the same was true in January 2022).

The NOAA considers that Marin County is incurring a drought and a flood simultaneously!

Marin County is very much in the flood-risk zone as stated by another NOAA division!

Below see its current set of Flood Watch warnings for Marin County. 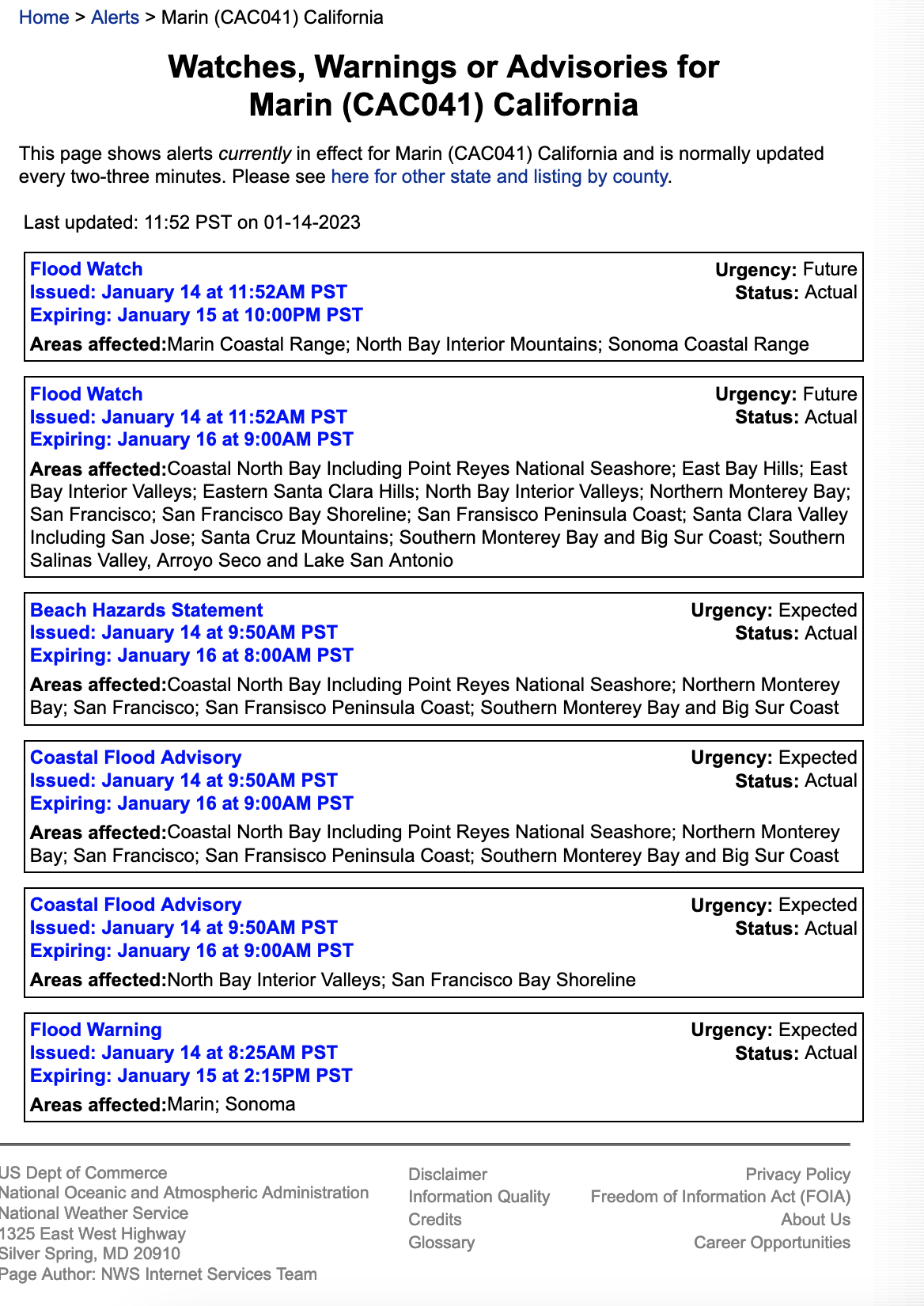 Now how about the remainder of California?

I collected observations at 52 different stations within the State (covering all major cities and numerous others). As shown below, rainfall throughout the entire State is way ahead of average on a water year-to-date basis.

As shown above, if the NOAA Drought Monitor factored rainfall data it would not evaluate that the whole State is in drought status.

So, what explains the NOAA Drought Monitor's dire assessment of the whole of California in a drought?

How the NOAA Drought Monitor looks at the data 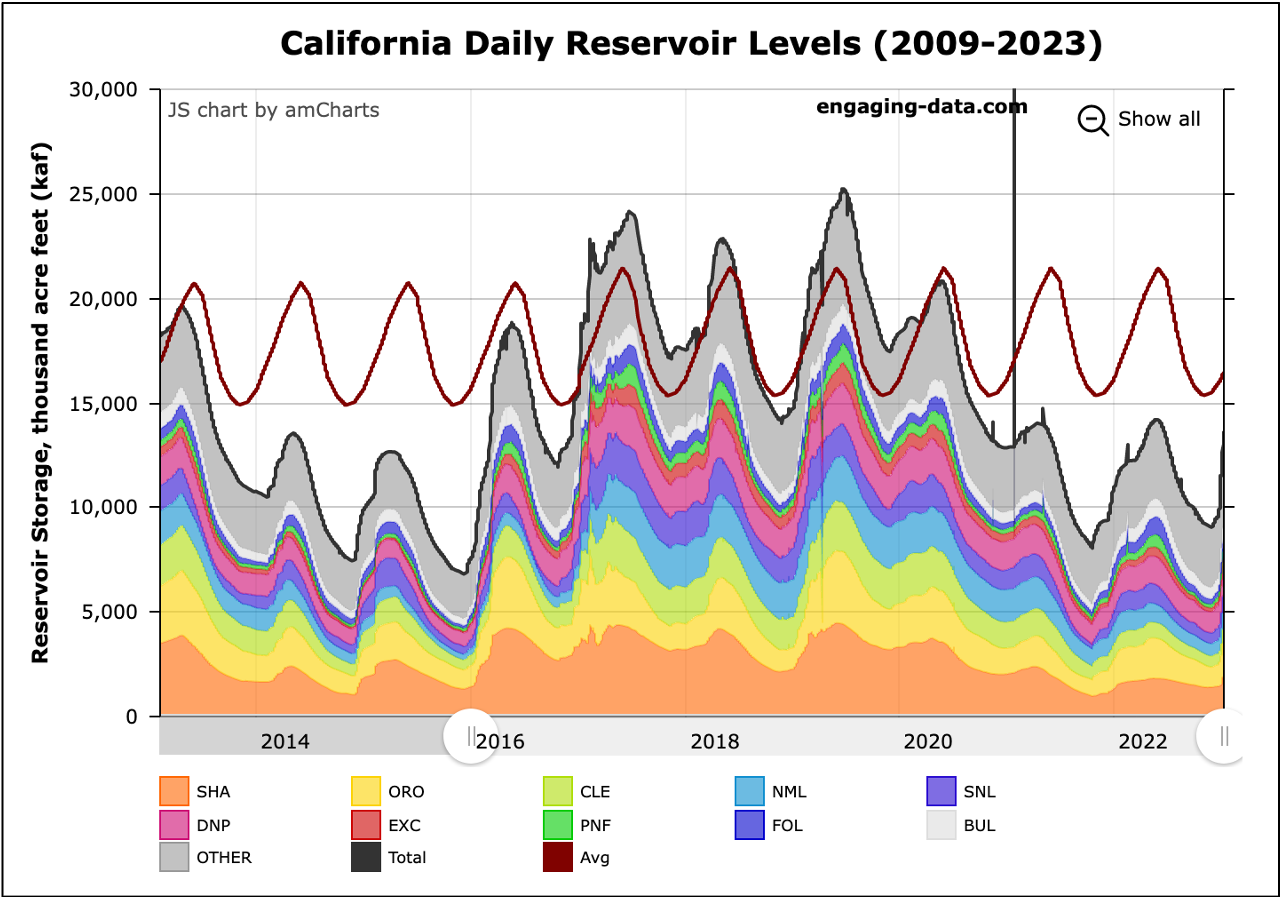 To understand the NOAA Drought Monitor logic, you can focus on just two lines.

As long as the total black line is much under the average-brown line, the NOAA Drought Monitor considers that much of California is experiencing a drought. You can see that this has been the case since late 2020.

Below I quote the most recent explanatory narrative from the NOAA Drought Monitor regarding their drought assessment for California.

A long-term drought, dating back to the 2019-2020 winter, continues across California... However, the intense precipitation in California over the past few weeks ... has significantly reduced drought intensity... Most of the state saw a 1-category improvement this week... Despite the record precipitation over the past 6 weeks, large parts of the state remain in D1-D2 since moisture deficits have been entrenched across some areas for the last 2-3 years. At least one-third of the state has been in drought (D1+) since February 2020.

Drought vs. Flood. It can be confusing 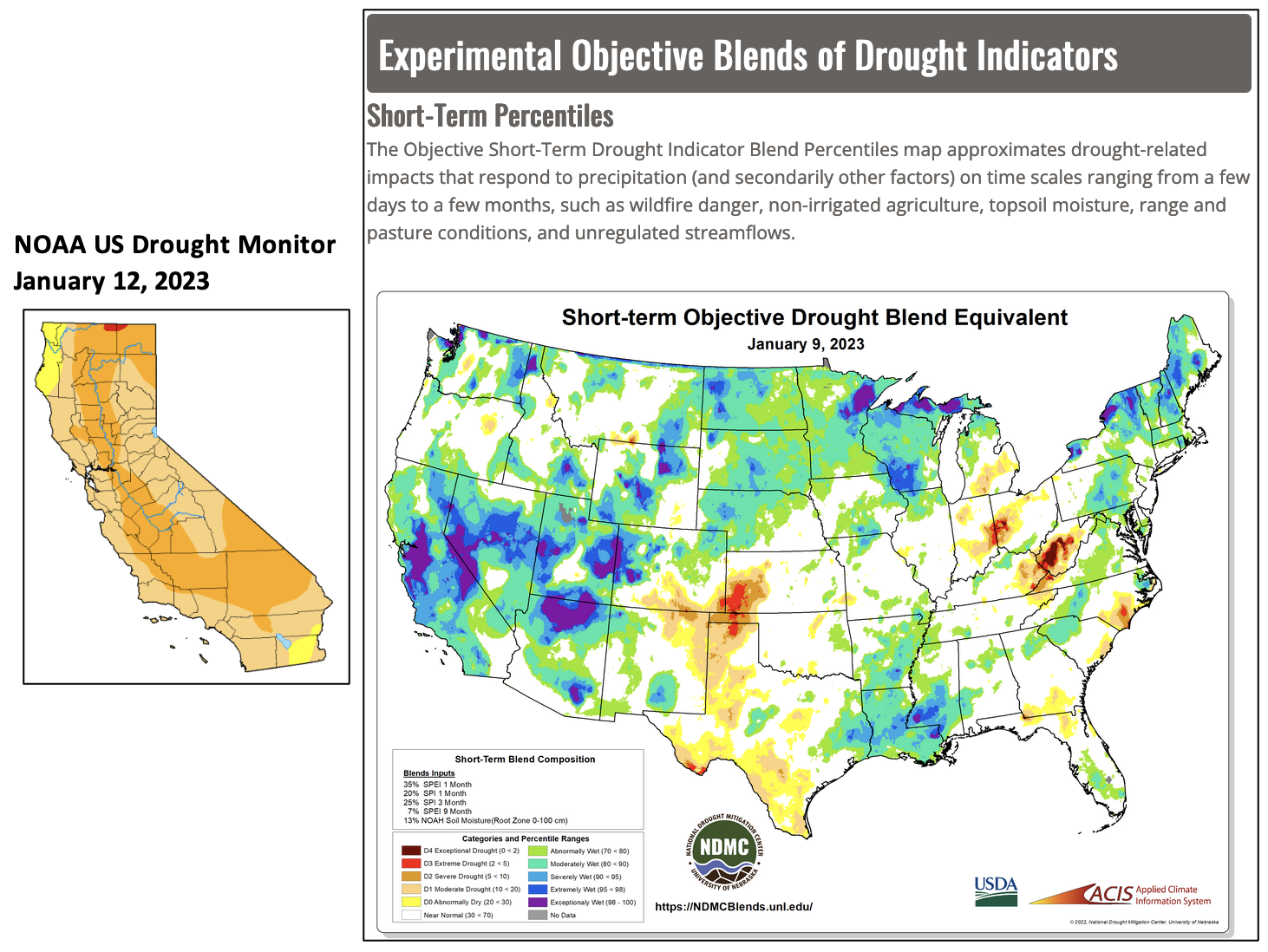 On the left is the current NOAA Drought Monitor map for California, which we saw at the beginning of this article. It depicts the whole State as experiencing drought conditions of varying severity.

On the right is another map also available on the same NOAA website that discloses a multi-dimensional approach to hydrology. And, it indicates that much of California's current climate conditions are bordering on flooding conditions.

The difference between nuance and inaccuracy

The NOAA Drought Monitor has a long-term lagging perspective. As long as reservoir levels are below average, they will call it a drought.

The NOAA Flood Watch has a live perspective on actual rainfall, soil moisture saturation, and flooding.

So, the NOAA advances that one does not exclude the other. You can be in a drought from a reservoir level & water supply perspective; and, at the same time incur flooding at the present.

This argument makes perfect sense. But, the implementation of the NOAA Drought Monitor is way off when focusing on a local level.

As reviewed, there is not a single data point that supports that Marin County is in a drought. Marin's rainfall is way above average. The MMWD reservoirs are full and overflowing. The local soil is saturated. And, flood risk is everywhere within the County.

Marin County is the one data set I am familiar with. However, given my review of the Statewide rainfall data at 52 different locations (the majority with rainfall at 150% or more of average), I intuit that the NOAA Drought Monitor misclassifies many other counties and cities as being in a drought.

A final point, are our droughts manufactured?

Let's focus on reservoir levels. From a water flow standpoint, if rains refill the reservoirs more than consumers use, reservoirs fill up and vice versa. Well, it is not that simple.

The State releases an immense amount of water for the environment (preserving endangered fisheries). Quoting the Public Policy Institute of California "Statewide, average water use is roughly 50% environmental, 40% agricultural, and 10% urban." Public Policy Institute of California. A while back, I studied this percentage of water allocation a bit further, and it is probably more like 25% related to normal river flows in Northern California that is not captured by our Statewide water infrastructure (dams, reservoirs, aqueducts, etc.), 25% water release from reservoirs due to environmental mandates, 40% agricultural, and 10% urban.

On January 16, 2023, the Marin IJ had a cover page article on the same subject. Marin IJ article. Just in case the link does not work, I will outline the main point. 94% of the water that has flowed since the beginning of the year through the Sacramento-San Joaquin River Delta, a linchpin of California's water system has continued straight to the Pacific Ocean instead of being captured and stored in the state's reservoirs because of environmental water release mandates to protect a 2-inch long fish, the smelt. This winter only 5 smelts have been found by scientists. So, the state is releasing millions of acre-feet (AF) of water for 5 smelts.

Environmental water release mandates have a very strong impact at the local level too. The Marin Municipal Water District (MMWD) environmental water release mandates are 10,604 AF in regular years and 8,961 AF in dry years. MMWD customers currently use 21,164 AF per year. So, in a dry year, the MMWD releases 42% as much water for the benefit of about 600 salmon than for its 192,500 customers. At the end of 2020, when the MMWD was facing running out of water within less than 12 months, the mentioned water release mandates represented an unavailable extra 5 months of human life sustenance (from 12 to 17 months). That is to save about 600 wild salmons that we eat by the ton throughout the West Coast.