It’s not a secret that California is losing population. And in terms of loss of domestic wealth, California is now number one in the country, while Florida and Texas are among the biggest gainers. 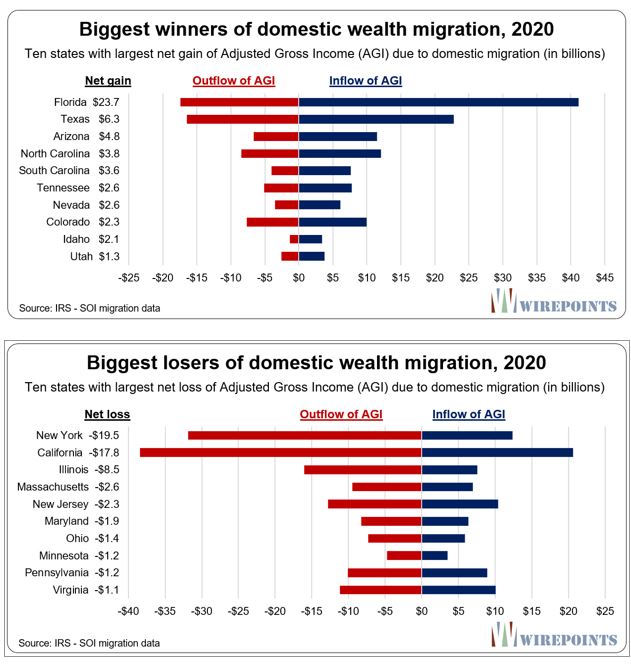 Losses are also being seen in many counties in the San Francisco Bay Area. 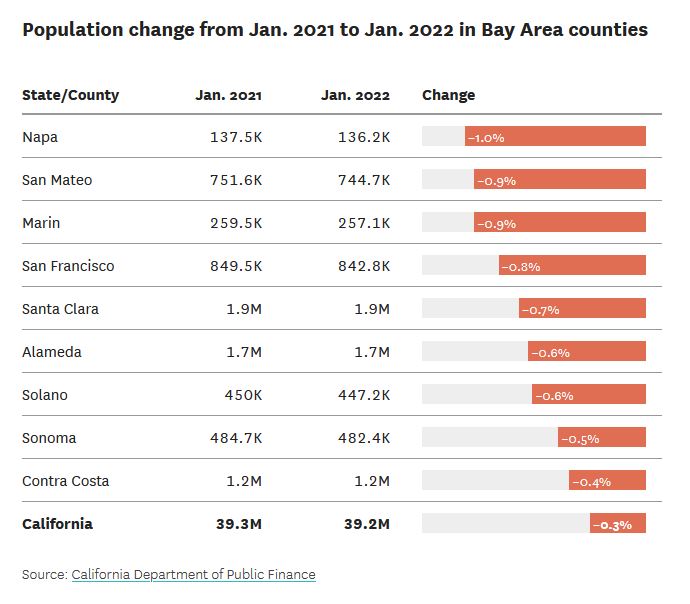 Yeah, I know, who really wants to live in Texas, anyway, these days? And, granted the cost of housing in California is a part of it, but if we compare average earnings to average housing costs, California is not even in the top ten in unaffordability. (Boise is currently the most unaffordable housing market.) In reality, it’s the overall cost of living that makes living in our state so unaffordable (e.g., we have the highest cumulative tax rates in the country and punitive ordinary income taxes on capital gains).

This, combined with demographic factors are important drivers of the current out-migration trend from our urban centers. As Eric McGhee, a senior fellow at the Public Policy Institute of California notes,

“Several of the trends driving down California’s population numbers, such as declining birth rates and an aging population, are playing out in the rest of the country, as well.”

Meanwhile, against this backdrop, our state legislators are doubling down on forcing “growth” by demanding absurdly high housing production quotas, even in California counties and cities that are losing population.

But, even before the recent California exodus began, most of the smaller cities and counties being targeted for hyper-growth by state agencies have historically had very modest growth rates; nothing like the fantastical growth the state is now proposing—growth projections that even the Office of the California State Auditor says are “not supported by evidence.” 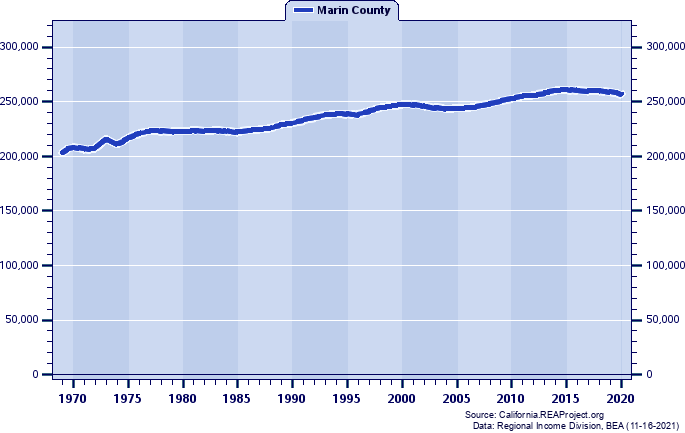 However, this only translates into an annual population growth rate in Marin County of less than 0.45% per year, over that 52-year period! At the same time, the state’s growth quotas for just the next 8 years are astronomically higher.

As Sharon Rushton notes in her recent article on RHNA quotas,

“Unincorporated Marin’s Regional Housing Needs Allocation of 3,569 housing units is 19 times larger than that for the last RHNA cycle, which was 185 units, and more than all of the housing units allocated to the County for the last 23 years (3 separate RHNA cycles – 1999 through 2022).”

That equates to a housing growth quota increase of over 1,900% in just 8 years and more than 45 times (4,500%) the actual population growth rate over the past 52 years!

And this is coming at a time when an increasing number of economists are suggesting we are heading into a decade of subpar investment returns and stagnating economic growth.

This is unsustainable madness. Something has to give.

In most California cities, the concept of actually planning how a city grows has pretty much been thrown out the window. All city planning departments are doing now is hiring pricey consultants (translation: carpetbaggers) to come to tell them how to get an “A” on their Housing Element “opportunity sites” list so the Department of Housing and Community Development (HCD) in Sacramento will certify their Housing Element so they will avoid lawsuits and penalties.

Municipalities are throwing caution and common sense to the wind and ignoring long-term socioeconomic consequences.They are making random, knee jerk decisions to rezone and approve development proposals in response to threats by developers and state agencies. The importance of what’s good for their community, in the long run, has been pushed to the end of the line.

In an effort to stem the force of this landslide and keep it from obliterating established neighborhoods, residents have been trying to find a way to legislate against it. Unfortunately, most avenues to do that have been intentionally cut off by recent state legislation. And local regulations cannot contradict state law.

But the residents of Menlo Park may have found a way to a least preserve a last remnant of the American Dream; the single-family neighborhood.

A group called “Menlo Balance” is seeking to limit the rezoning of single-family lots for higher-density development by requiring a public vote at the ballot box. The group was able to gather over 3,000 signatures to get this initiative on the ballot, in just three weeks. That has to be some kind of record.

As Tim Yeager, one of the founders of Menlo Balance notes,

"I think when you envision how the city's laid out … with the road widths we have … this planning process was never envisioned (as) having the density we're now talking about. When you look at sites that are not close to the train, not close to bus stops, and you talk about putting high-density (housing) there, you are exacerbating traffic problems. This would essentially just make it so the city has to do its job.”

"It matters to me because I have a 5-year-old. I want him to be able to ride his bike in our neighborhood … without having hundreds of cars zooming by, which is the problem with having high density in residential areas."

Predictably, their critics are pulling out every trope and dog-whistle they can think of to attack Menlo Balance. But doing so ignores the fact that they were able to get enough signatures to get it on the ballot, almost overnight. Doesn’t that, in itself, indicate that Menlo Balance has struck a nerve and tapped into a constituency that feels left out of the city’s planning process?

Ironically, if the situation was reversed and the ballot measure was for rezoning single-family parcels for higher density development without any vote by the community, the YIMBY, pro-high-density, multifamily advocates would be the first to say that the gathering of all the signatures in three weeks indicated how important the issue was to the community.

"I'm disappointed that this discussion had to reach the point of initiative, I wish we would have been able to bring all of the stakeholders together and work out a path for it that everyone would've been in support of."

I’m upset that we can’t continue to get away with the dog-and-pony show of bringing in high-paid, out-of-town consultants, to hold “community workshops” where we all pretend to “listen” and then go do whatever we please, anyway.

But politicians like Mr. Combs refuse to understand the blow-back he’s disappointed about is the logical outcome of decades of state and local government ignoring the desires of middle-class homeowners/voters--who pay the majority of taxes in their community—and increasingly denying them their right to have any say in their community’s zoning and planning process.

Will it withstand the inevitable legal challenges?

It will be of keen interest to follow the outcome of the Menlo Park ballot initiative. And if it should win, what happens after that.

It’s inevitable that if it passes, it will be challenged in the courts by housing advocacy groups that are well-funded by development and corporate interests. They will allege that it is not compliant with the Housing Accountability Act and a slew of other state housing laws going back to SB 375, from 2008. They will argue that it is an obstacle to RHNA quotas and the mandates handed down by HCD and, in the San Francisco Bay Area, by the Metropolitan Transportation Commission (MTC).

But will this opposition prevail?

On its face, the Menlo Balance initiative doesn’t appear to violate any housing laws. It doesn’t affect SB 9 (the lot-split law) or SB 10 (the law giving cities the discretion to approve multifamily development in single-family zoning). It doesn’t affect SB 330, the state’s “streamlining” regulations, or SB 35. And the argument that it will impact a municipality’s ability to fulfill its RHNA quotas is questionable.

On the one hand, we have housing units quotas that (according to the State Auditor and independent experts) appear to be made up out of whole cloth by HCD without any supporting data or evidence and administered by a myriad of state agencies run by unelected bureaucrats (HCD, MTC, etc.) who have mostly been making up their own rules, behind closed doors, for more than a decade.

On the other hand, you have residents exercising their legitimate right to petition their government and change their city’s General Plan and Zoning Ordinance. Is it really possible that the courts could blatantly ignore the will of the people in this case? If so, maybe Californians should stop mocking Texas for being socially tone-deaf and backward.

This is one to watch. If it withstands the legal challenges, other communities should consider emulating it.