After more than a decade of capitulating to the state’s the Regional Housing Needs Assessment (RHNA) quotas that are doled out by the Association of Bay Area Governments (ABAG), some Marin elected officials have finally begun to wake up the absurdity of the entire housing quota system.

RHNA housing quotas are based on regional mandates handed down by the California State Housing and Community Development Agency (HCD). In the current “housing cycle” the quotas for some Marin cities now exceed ten times their historical growth rates.

Key to all this is how these housing quota numbers are determined; a question community activists have been asking for a very long time. Based on the results of an audit recently conducted by the Office of the California State Auditor, the answer appears to be they have simply been made up and are “unsupported by any evidence.”

Having missed chances to lodge protests and file legal actions to challenge the methodology and constitutionality of RHNA quotes, in the past, Marin officials are scrambling to find counterarguments to the state’s demands--almost all of which are, by now, precluded by recent state laws; laws which these same officials failed to push back against when community voices were warning them about before they were passed.

Better late than never, I suppose. Unfortunately, it’s probably too little, too late. The ongoing inability of local Marin governments to join together to push back on the state’s ridiculous, ideologically driven, growth quota nonsense is destined to be our County’s undoing.[1]

Among the concerns that our local officials are now facing are increases in environmental impacts, wildfire hazards, and residents’ evacuation risks. This seems ironic since these hazards have been well-known, forever, and these same elected officials have repeatedly pooh-poohed environmental and fire hazard arguments in the past, when voiced by the community in opposition to Housing Elements, individual projects, and the pace of growth, in general.

(Even as it is now, in Mill Valley where I live, city hall and most city services and agencies—planning, building department, public works--are only open a few hours a day and a few days a week.)

Our locally elected governments have generally turned a deaf ear to these realities, preferring instead to do whatever it takes to get HCD to certify their Housing Element, regardless of the long-term consequences. But the chickens are coming home to roost as a result of this folly because pursuing a course of appeasement with HCD for years has now created a monster with an insatiable appetite.

Marin County Supervisors are beginning to realize that among the most significant challenges we face by allowing to expand hyper-growth in the proximity of the wildlands urban interface (the “WUI”) and into areas designated as high fire hazard severity zones is how homeowners will be able to evacuate in the event of a catastrophic wildfire. This threat is particularly acute in Marin because the majority of our roads and rights of way in our hillside areas are winding, narrow, and substandard.

According to a recent Marin IJ article,

County planners say they are facing impossible deadlines to comply with state mapping and evacuation planning requirements. They lament that they’re in a bind because the state has not released “fire hazard severity zone maps,” which are needed for their consultants to delineate where fire hazards exist.

However, this is not entirely true.

Several fire hazard zone maps have been created by state agencies that have expertise and experience in fire hazard assessment. Among these, two sources that quickly come to mind are maps by the California Public Utilities Commission and The Office of the State Fire Marshal (CAL FIRE). Both of these credible state agencies produce reliable data about the location of high fire hazard zones across the state.

Of the two, the CPUC mapping is perhaps the most comprehensive because its maps are the result of a combination of several other data sources (including the CAL FIRE maps shown below). 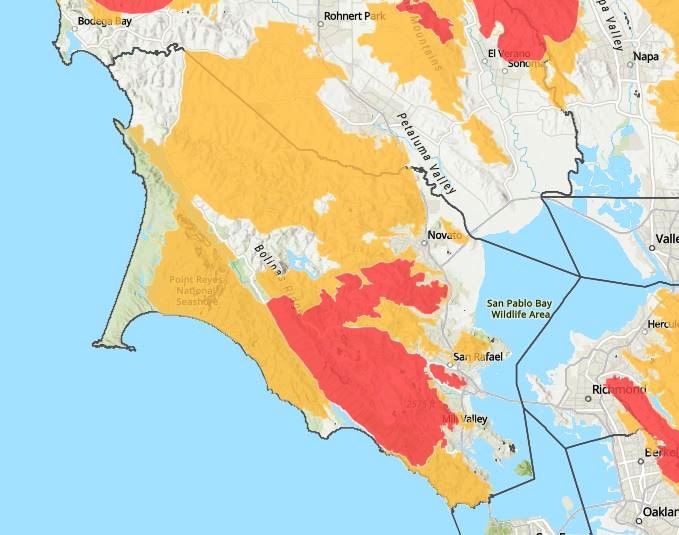 A blow-up of the Southern Marin portion, where a large percentage of Marin’s population lives, shows that most of the area is in or in proximity to very high fire hazard severity zone designated land. 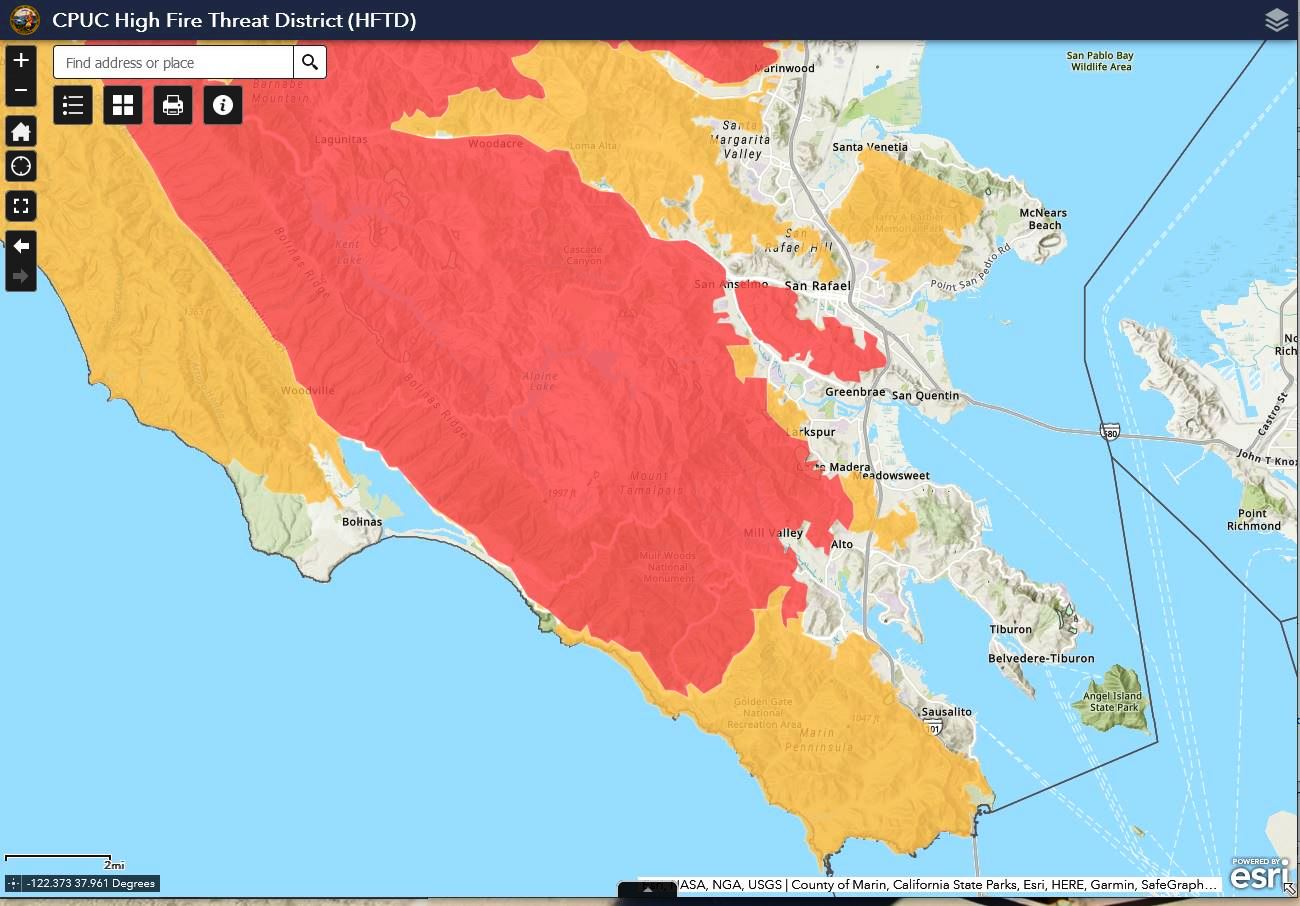 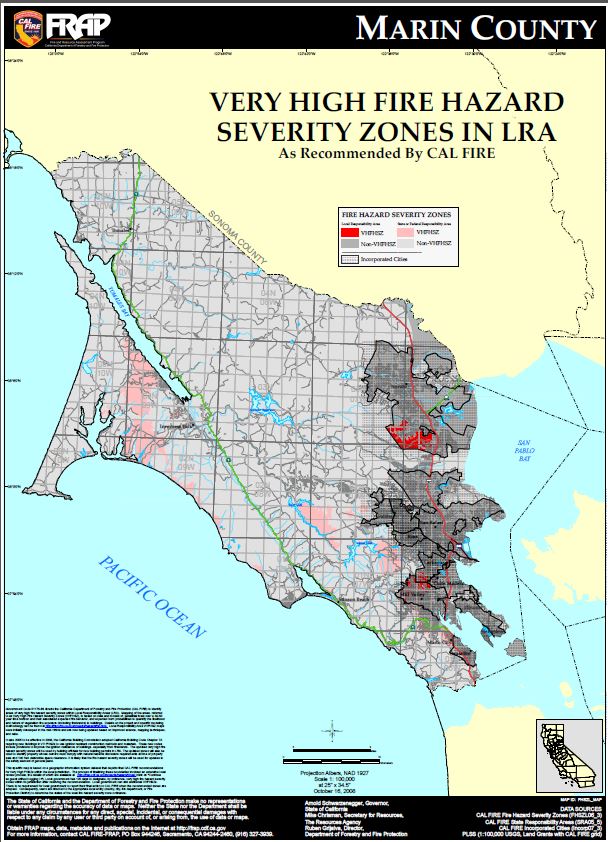 The CAL FIRE maps are a component of the CPUC maps but don't include analysis of the Golden Gate National Recreation Area lands or certain cities contiguous with it.

Still, a blow-up of the Southern Marin portion, where most of Marin’s population lives, shows the area in the WUI is in the high fire hazard severity zone category. 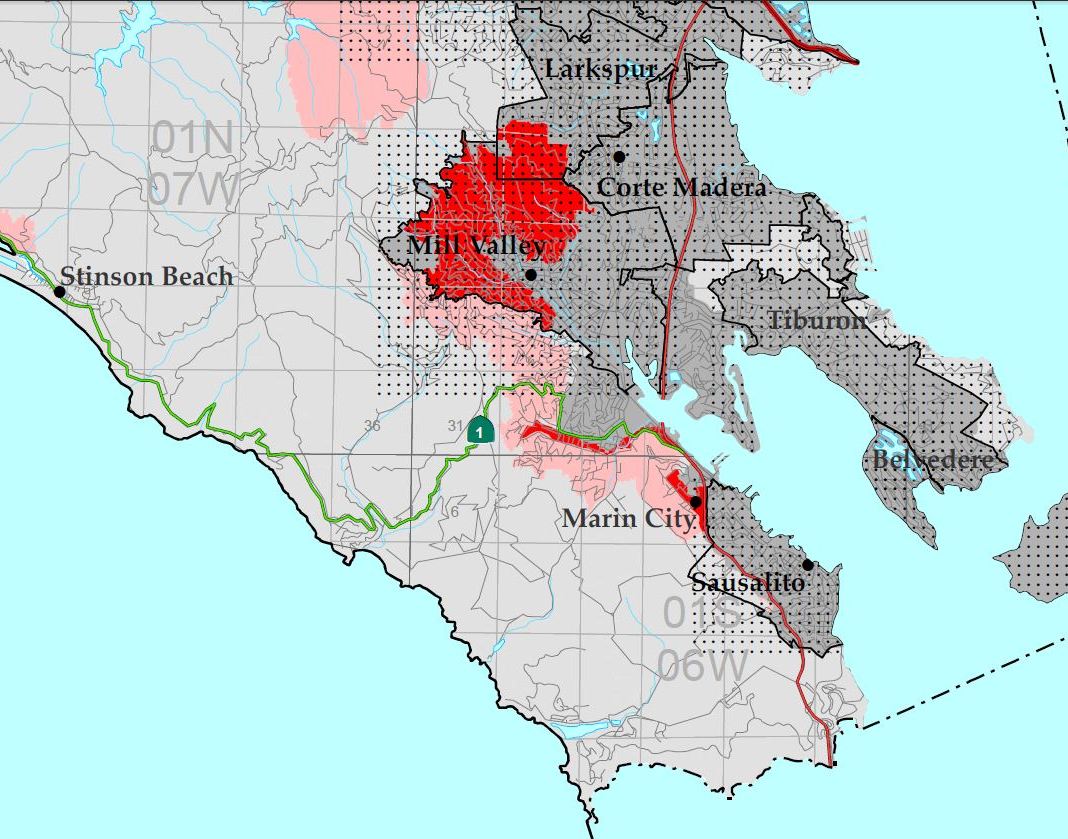 Given this information, it is reasonable to assume that Marin County already has a credible basis to argue that rezoning open space for housing and increasing housing development in the WUI and in proximity to high and very high fire hazard severity zones is a very bad idea if one is concerned about residents' safety.

CEQA, a seminal piece of legislation from the 1970s that played a significant role in the burgeoning, national, environmental movement at that time, is a much-maligned law, today. And although polling of housing developers does not indicate that CEQA is a significant obstacle to development (they cite costs of land and labor and entitlement issues at the top of their lists), the “abuse of CEQA” remains a favorite pro-housing advocate talking point.

Every piece of housing legislation passed in California since SB 375 in 2008 has chipped away at CEQA’s requirements to assess significant environmental impacts of development or has exempted “qualifying” projects (affordable units within certain distances from public transportation, etc.) from CEQA compliance, altogether. However, exempting high-density housing projects in or in proximity to high and very high fire hazard severity zones in Marin is a dangerous endeavor.

Likewise, for projects that can't claim a CEQA exemption, the Governor’s Office of Planning and Research amended Appendix G of the CEQA regulations (“Guidelines”) in 2018 to include “specific land-use strategies to reduce fire risk to buildings, infrastructure, and communities.”

According to the law firm of Farella Braun + Martell, assuming that a project is not exempt from CEQA,

“The new amendments now guide agencies in how to evaluate wildfire risks as they begin preparing environmental review documents. This is a significant change from how agencies dealt with this issue before. Prior to these amendments, there were no specific wildfire-related questions that prompted agencies to think about how new projects will create or exacerbate wildfire risks. Now the Environmental Checklist Form, found in Appendix G of the CEQA Guidelines, includes new questions asking whether the relevant project is “located in or near state responsibility areas or lands classified as very high fire hazard severity zones.” [Emphasis added]

“In that situation, the agency may… assess whether, among other things, the project will impair an emergency evacuation plan, exacerbate wildfire risks, require the installation of power lines that may exacerbate fire risk or expose people or structures to significant risks from post-fire landslides.”

In addition, whether a new project creates or increases wildfire evacuation risks for new or existing residents is now being adjudicated in the courts, more frequently.

In her ruling, she stated that

“CEQA Guidelines provide that impacts in wildfire risk areas and a project's potential to cause substantial adverse effects on humans must be evaluated. Cal. Code Regs., tit. 14 ("Guidelines") §§ 15126.2(a); 15065.”

“The EIR fails to adequately disclose, analyze, and/or mitigate the Project’s significant direct, indirect, and cumulative impacts relating to wildfire and wildfire safety.” And “fails to adequately analyze the Project’s impacts on wildfire evacuation times and road capacity. This “lack of relevant information in the EIR concerning project-specific evacuation impacts constitutes a prejudicial abuse of discretion.”

Further, she ruled that CEQA would require an evaluation of

“whether the project would ‘[e]xpose people or structures, either directly or indirectly, to a significant risk of loss, injury or death involving wildland fires;’ And that “This is an identifiable quantitative and/or performance level of a particular environmental effect (Guidelines § 15064.7(a)), capable of assessment.”

As such, the judge concluded,

“The lack of measureable assessment as to this threshold of significance means the public was not informed as to the extent to which the project would expose them to significant risk of loss, injury or death regarding evacuation timing. Nor does the plan inform as to the risk of injury or death if residents are instructed to remain on site while the fires burn around them.” [Emphasis added]

Granted this was a Superior Court ruling that doesn't affect state housing law, but the outcome in this case and other cases like it suggest that Marin County agencies and cities can reasonably argue that allowing development to be exempt from CEQA is ill-advised when it’s in proximity to Marin’s wildlands urban interface, its open space, or any high and very high fire hazard severity zones. And that since undeveloped land is in short supply in our county, current state housing quotas may be unachievable without endangering residents.

[1] Community Venture Partners investigated bringing a private attorney general, legal action against the state’s RHNA methodology, several years ago, in an attempt to fill the void left by our elected officials. But, sadly, we discovered that the only parties who have “legal standing” to bring such an action are Marin cities and the County.