In Part II of this series about SB 9, I stated that the Terner Center Report miscalculated how ordinary homeowners would respond to the bill’s “by right” lot splitting provisions and see it as a wealth-building tool. I also suggested that private interests would start approaching homeowners with new schemes to encourage them to split lots. It didn’t take long for evidence of this to emerge. 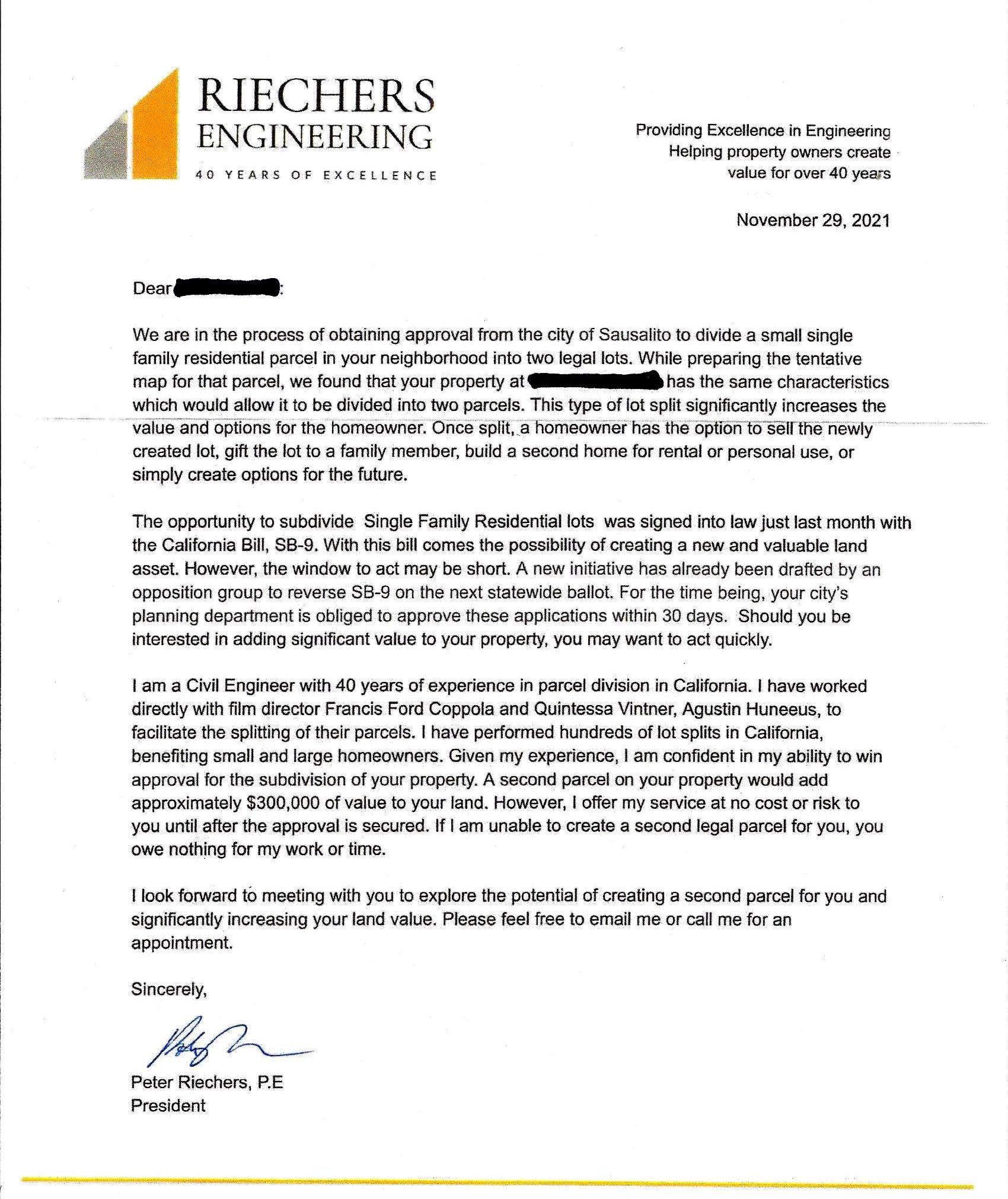 It is only a matter of time before developer’s show up after lot splits have been approved and recorded in the County records, offering various schemes to enrich a homeowner’s bottom line by building single-family homes and duplexes on those newly minted lots.

However, all this activity has also brought more of SB 9’s ambiguities to light. An example of this is how SB 9 impacts existing Homeowners Association CC&Rs (covenants, conditions, and restrictions), also known as bylaws, that govern and/or limit development in planned community neighborhoods.

SB 9 is silent on these issues.

According to the Tinnelly Law Group,

“Impact on HOA CC&R Restrictions is unclear – The common question/concern we are receiving in connection with SB 9 is whether it will override homeowners association (HOA) governing documents that prohibit the type of development projects within HOAs that SB 9 is intended to provide. For example, it is common for a HOA's CC&Rs to contain provisions prohibiting homeowners from subdividing their lots. SB 9 is silent with respect to this issue and those in the HOA legal community are concerned that SB 9 could be construed as demonstrating public policy in favor of these types of projects. California courts have held that CC&R restrictions which violate public policy may be challenged and held as enforceable. (See Narstedt v. Lakeside Village Condo. Assn. (1994) 8 Cal. 4th 361).”

“Senator Toni Atkins, the author of SB 9, submitted a letter to the California Secretary of State ostensibly addressing this concern. It provides in pertinent part that:

“…on the issue of common interest developments (CID) and homeowners’ associations (HOA). My office has consulted with Legislative Counsel, and SB 9 would not override CID or HOA restrictions. Specifically, SB 9 is silent on the issue, meaning the bill contains no provisions that supersede HOA or CID governing documents. As we have seen with other housing legislation, SB 9 would have to contain an explicit and proactive provision to override those rules. This bill does not.” (Emphasis added.)

“While superficially this may seem helpful, it notably fails to state anything regarding the intent of SB 9 and the California Legislature with regard to this issue. The letter does not have the force of law and whether it will be given weight by California courts in assessing the public policy of SB 9 as it applies to HOAs is anyone’s guess. Moreover, efforts by CAI’s California Legislative Action Committee to request changes to SB 9’s language to explicitly state that it does not override HOA governing documents were ignored.”

“Questions remain as to what, if any, impact SB 9 will have on HOAs and the degree to which homeowners, investors and residential developers will actually find it financially advantageous to pursue multi-unit residential projects within single-family common interest developments.”

This opinion, of course, makes sense, whereas the statement by Toni Atkins, who is one of the main proponents of the legislation but has zero interpretive authority in this situation, makes no sense at all.

At best, the standing of HOA CCRs is ambiguous and ambiguity is the rocket fuel of litigation. Without amendments to SB 9, it seems reasonable for a homeowner or developer interests to sue for “by right” approval if they are denied a lot split because of an existing HOA restriction.

However, there is another potentially unintended consequence in the resolution of these issues. If the legislature decides to amend SB 9, to clearly state that any development or neighborhood that is governed by HOA CCRs is exempted from SB 9, most of the wealthiest and most desirable areas in the state would be exempted. So much for “fair share.” How would it be fair that those who have "discriminated against lot splits" (in the eyes of housing advocates; e.g., Senator Wiener) in the past, get away without consequences but everyone else can't?

That would be a huge, paradoxical loss for the sponsors of SB 9.

It would seem the state legislature has written itself into a corner.

Bob Silvestri is a Marin County resident, the Editor of the Marin Post, and the founder and president of Community Venture Partners, a 501(c)(3) nonprofit community organization funded by individuals and nonprofit donors. Please consider DONATING TO CVP to enable us to continue to work on behalf of California residents.