Sacramento’s current obsession with trickle-down housing economics is based on an unquestioned belief that profit-driven “markets” will solve all our affordable housing problems if we can just get rid of local government control of zoning and all those pain-in-the-butt taxpayers who want a one-man-one-vote democracy. With the passage of SB10, the state has even gone so far as to add provisions to allow local government officials to override local voter initiatives if they want to approve ten-unit apartment buildings on single-family lots.[1] The fact that there is zero historical evidence of this leading to housing affordability has not deterred politicians from encoding their trickle-down, supply-side theories into every housing law they propose.

Local planning and zoning were relatively feeble forces in this country for most of its existence (a much more rapacious form of “every man for himself” capitalism prevailed) and the percentage of families that were homeowners remained relatively low (about 45%). But in the past 70 years, local planning and zoning have grown in power to be robust and enforceable, while the percentage of homeowners has risen to all-time highs (about 67%). 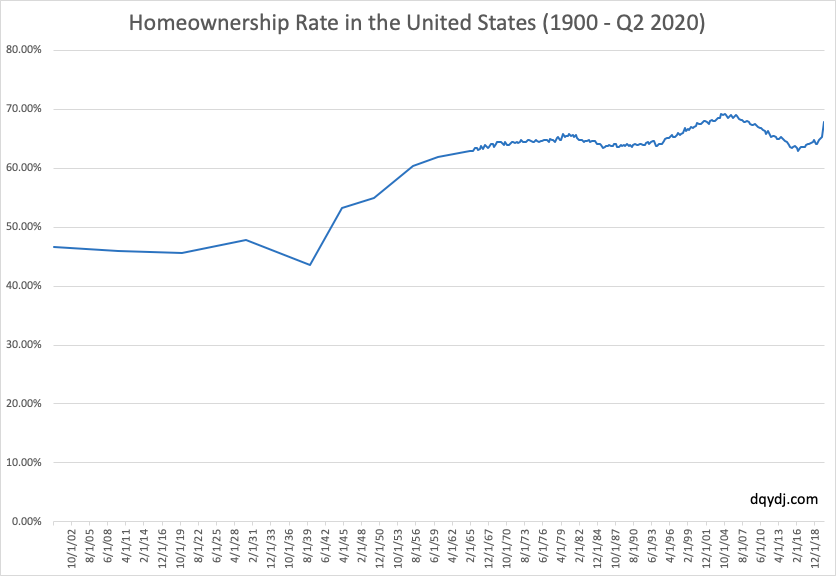 In fact, after falling in the wake of the 2008 financial crisis, home ownership has been steadily rising since 2017 even as home prices have accelerated at an unprecedented rate. So, maybe everything is not as horrible as the media and political-ladder-climbing politicians make it out to be.

But since home ownership rates imply affordability, why the paradox?

For starters, it shows that markets are not correlated with affordability of home ownership in any statistically significant way and implies that housing affordability is largely governed by other factors.

Perhaps, the overriding reason for the expansion of home ownership and thus its affordability has been due to the advent of modern credit markets and more specifically to government mortgage guarantees and purchases, coupled with a more reliable banking system. This has not only supported home ownership but also suggests that if you want to incentivize home ownership, it’s better to provide financial support directly to individuals than to subsidize real estate development companies in the hope that they will somehow do the right thing.

The current phenomenon known as the Great Resignation underscores this. It turns out that trickle-down economics not only fails to work on a systemic level, but it even fails within individual companies, where the lion’s share of the financial rewards go to the very few at the top. And the number of people quitting their jobs is in direct protest of that.

Housing affordability is more complicated than it seems.

The methods that brought us our success have reached diminishing returns. Now what?

Our current socioeconomic “operating system” has been built upon a form of capitalism that is presently serving the interests of fewer people. (e.g., housing affordability, college affordability, healthcare affordability, you name it.) More importantly, though, it is producing increasingly dire environmental outcomes. If single-family home ownership was the goose that laid the golden egg that built our post-WWII economy, then our planet is the ultimate golden goose, without which we’ve got zip to build on.

Don’t get me wrong, I’m not against capitalism if it can save itself from itself and emerge in a much more enlightened form. But right now, it’s not working as well as it could.

Kim Heacox, at the Guardian, reports that since 1988, "nearly 1 million square kilometers of the Amazon, an area roughly the size of Texas and New Mexico combined, have been destroyed, primarily in Brazil, but also in Peru, Colombia, Venezuela, Suriname, Guyana, and French Guyana. That equates to an average of some 200,000 acres every day, or 40 football fields per minute." It seems the only way the average person can make their “fortune” (the basic carrot of unbridled capitalism) is to pursue slash and burn farming, a two-thousand-year-old method of commerce. (the demand for old growth hardwood in global markets is also not helping preserve the Amazon's precious rainforests)

It is an understatement to say this is the biggest, climate paradigm shift in the past 50 years, matched only by the corresponding rapid warming of our planet’s polar regions.

Meanwhile, many of the mainstays of our 1st world operating system--our chemical-dependent, aquifer decimating, global agribusiness model, our anti-environmental, fossil-fuel energy model, and our gluttonous, consumption-addicted economic model that has now spread to the far corners of the world are all dangerously antiquated. The former, because it is destroying crop biodiversity, poisoning the soil microbiology with pesticides and artificial fertilizers, crippling more sustainable growing systems from competing, and polluting the oceans with toxic runoff resulting in enormous coastal dead zones around the world. The latter two because the negative consequences of their outputs are irreparably trashing the earth.

Our operating system is also beyond inefficient. We basically take 50 pounds global resources, to which we ascribe no value other than the cost to extract it, to produce a couple of ounces of benefits. And we call this “progress” and "growth."

And while California markets itself as the progressive leader, the negative environmental consequences of its “hyper-growth at any cost” mentality will far outweigh our positive advances. All the talk about “new urbanism” and “transit-oriented development” adds up to nothing more than sanctimonious green-washing. We are substituting realistic, durable environmental solutions to our enormous systemic problems with easy-to-swallow, sound-bite salves that are dumbed-down to soothe consciences so we can just carry on as if none of it was happening.

But it doesn’t take a genius to see that just adding more legislative baling wire to enable us to consume more and build more to keep our “prosperity” afloat only adds fragility to our socioeconomic system.

Symptoms of the instability of our operating system are evident everywhere in the level of fear and loathing that’s infused in our daily interactions. If we keep building and growing and “prospering” the same way we always have, using the same antiquated design and construction methods, assuming the same positive outcomes, we will only succeed in increasing the negative socioeconomic and greater environmental consequences.

We’re hearing competing arguments about what to do about our predicament. Some argue that more of the same is the only way forward. This theory views our global challenges as yet another financial opportunity, believing that self-interest and the opportunity to make more money is the only ingredient needed to do the right things to fix the world (all evidence to the contrary). Others argue that it’s too late, that capitalism cannot save itself or the planet, and that “the private sector’s embrace of green finance appears to be yet another gimmick to avoid a real reckoning of what must be done right now to prevent disaster.”

We find ourselves in uncharted territory. The best one can say is the jury is still out on who’s right. But it’s pretty clear that more of what worked in the past just won’t work in the future. Yet, the state of California continues to plow forward, doubling down on growth and traditional, carbon-spewing, real estate development schemes, undermining environmental protection laws, ignoring the working middle-class,and oblivious to the big picture and the most obvious warning signs like our new, year-round wildfire season and the fact that we are running out of water.

One thing is for sure. We are running out of time.

[1] Reading SB10 would almost be comical if it wasn’t so tragic. It states that “The people of California do enact…” a law that denies them the ability to have their right to enact law via their own ballot initiatives.

Bob Silvestri is a Marin County resident and the founder and president of Community Venture Partners, a 501(c)(3) nonprofit community organization funded by individuals and nonprofit donors. Please consider DONATING TO CVP to enable us to continue to work on behalf of California residents.