In support of the effort to defeat Measure I on March 3rd, I provided technical assistance to the “NotSoSMART” campaign, funded by Molly Flater of Sonoma County.This article provides readers with some background on how and why Measure I was defeated on March 3rd.

The Vote Outcome on Measure I

The table below compares the results from the original 2008 Sonoma-Marin Rails sales tax, Measure Q with Measure I, in 2020. The numbers speak for themselves. 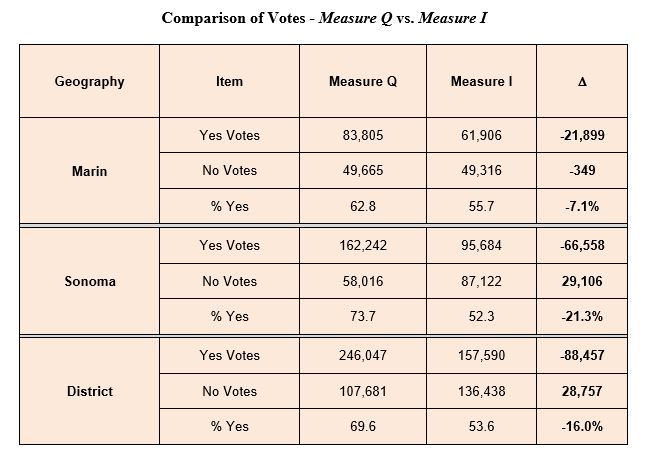 Why Did Opponents Win by As Much as They Did?

As SMART Board Chairman Eric Lucan (Novato) stated at the March Board meeting, there is no “sugar-coating” the trouncing the agency took on March 3rd.

Here are some thoughts about that worth considering.

1. The “NotSoSMART” campaign, while extraordinarily well-funded, actually won because of the issues the opposition campaign raised. Voters didn’t believe the campaign literature and advertisements just because they received mailers at home or saw or heard ads in the media. They believed the “NotSoSMART” campaign’s message because the main issues that were raised were credible.

One of the key issues about the agency’s culture was the lack of sufficient oversight over management by the SMART Board of Directors. But this issue wasn’t a new criticism of the agency. It had been identified years earlier in two separate Grand Jury reports in Marin and Sonoma.

For example, in 2014 in the Marin County Civil Grand Jury concluded in its report “SMART - Down the Track,”

“The SMART Board of Directors should play a more active role in representing the interests of the citizens of Sonoma and Marin Counties in governing and providing oversight of the SMART project. We found that some Board members do not have an adequate understanding of the financial and system operating issues. Understanding these issues is crucial to the fulfillment of their responsibilities to establish policy and provide oversight to SMART.”

2. The three main issues that the “NotSoSMART” campaign raised were:

Consistent with these issues were four themes that the “NotSoSMART” campaign determined voters cared about:

3. Additional issues that were discussed by voters who were inclined to delve more deeply into the train’s operations were:

For the reasons outlined above, SMART’s failure to address these legitimate concerns will likely lead to the defeat of any future SMART tax extension measures.

[1] The figures taken from the SMART Strategic Plan.

Arnold is a PhD economist, currently lecturing at the Fromm Institute (USF) and in the Osher Life Long Learning Institute (OLLI) at Dominican University and Sonoma State University.