The following letter has been sent to TBWBH Props & Measures, a "communications and strategy" consulting firm that was hired by the "Yes on B for High Quality Schools" committee, regarding the fees TBWBH was paid for the failed Tamalpais Union High School Parcel Tax measure in the March 3, 2020 election.

“Even on tough supermajority revenue measures, we maintain a win rate of over 90%.” 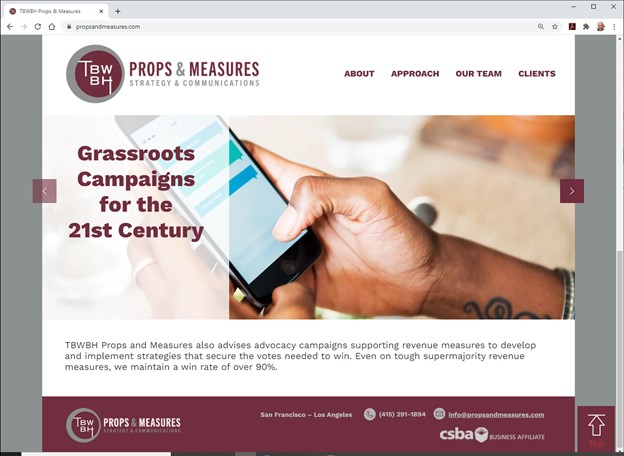 You can imagine how this statistic would prey upon the mind of a worried Tamalpais board or committee member seeking to pass Measure B parcel tax measure, in the March 3, 2020 election.

Measure B failed to pass and the cost to the TUHSD was tremendous. The “Yes on B for Quality Schools” committee paid $105,011.12 to TBWBH, in campaign consulting and other fees, in a losing effort (see 460 campaign finance form below). Even more troubling was this list of top contributors to the committee, which are all small, school supporting organizations that supplement scarce state funding in the classroom.

I am a district parent and [HS 1327] fund supporter. Never in my wildest dreams would I have imagined that my contributions to the [HS 1327] Fund would be paid out to a campaign consultant, or that those hard-earned dollars would be used to send sleek glossy mailers and buy Facebook advertisements aimed back at me.

In the small districts of Marin, this type of advertising has limited reach among educated and generally cynical residents. Community run campaigns are much more successful here.

I was volunteer treasurer for a different school parcel tax measure for the Ross Valley School District, the “Yes on E for RVSD” campaign, in 2018. Our volunteer team consisted primarily of real estate agents and social butterflies. But the team knew the district and was able to speak as trusted friends and neighbors. The committee “Yes on E for RVSD” never hired a campaign consultant and Measure E passed, garnering 77.05% of the vote.

Still, there is hope. In the upcoming election for TUSHD board, we have a candidate Mandy Downing who is endorsed by the Coalition for Sensible Taxpayers. CO$T wrote in their endorsement that

“[Mandy Downing] says she would oppose using taxpayer money to hire a polling consultant (favoring instead a conversation with the larger community about what it would support)."

This sounds like a step in the right direction.

So where do we go from here with TBWBH? Are we just the one out of 10 who loses when the other nine win? One wonders where that “more than 90%” claim originated… or if it is even accurate?

Willie Mays had a 0.302 career batting average. You can see detailed documentation of this career statistic on baseballreference.com. However, on TBWBH’s website there is no documentation.

I see only two ways forward. Either TBWBH’s supplies their exact “batting average” when “Yes on B for Quality Schools” signed on the dotted line for services or give the community a 100% refund. You claim to bat over 0.900, so this should be an easy calculation.

It’s too late to pull the statistic off of your website, which would just invite accusations of fraud, anyway. You are either the Willie Mays of campaign consulting or you are not.

[1] Note that $49,999 represents approximately 10% of the Foundation’s total assets in its most recently published 990 tax return. Propublica Nonprofit Search