Audacity and ignorance are as lethal as a firestorm

UPDATE: On June 5th, the Mill Valley City Council acceded to the CEQA arguments presented and removed the hardscape provision from the ordinance as a mandatory requirement. It remains as a suggested guideline for property owners to implement at their discretion.

Mill Valley has always been a sleepy town and during the summer it’s more like a ghost town. It’s the only time you get actually get around without a lot of traffic. Knowing this, one would think the City Council and City Manager would pick a better time to try to pass the most environmentally impactful legislation in Mill Valley’s history. Or, maybe that’s the point.

As the general public has become more aware of the draconian nature of the City’s proposed Fire Ordinance Vegetation Management Plan, comment letters have poured in. Two of the most significant of these are regarding CEQA, submitted by the Sierra Club-Marin County Group and by Robert Goodman of the law firm of Rogers Joseph O’Donnell, on behalf of the Mill Valley Residents for Protection of Wildlife. [Click the blue text links to read each letter in its entirety]

Approval of the proposed ordinance would be unlawful

The City of Mill Valley and, particularly, its City Manager and City Attorney, have habitually tried to avoid their legal obligations under the California Environmental Quality Act (CEQA), for more than a decade. This seems ironic in a City that is so enmeshed in and dependent on its natural surroundings.

Every time a zoning or planning ordinance has been proposed, whether it was for multifamily residential mixed-use zoning or the Miller Avenue Parkway Pilot project, the City automatically attempts to invoke an exemption from CEQA under Section 15061(b)(3), claiming that its actions have “no potential for causing a significant effect on the environment."

However, as Mr. Goodman points out in his letter, that provision in the law is only allowed “"where it can be seen with certainty that there is no possibility that the activity in may have a significant effect on the environment.” [Emphasis added]

Each time the City has been challenged on their exemption claim it has been forced to back down, knowing that they have zero chance of prevailing in court. Except for this time. This time the City has decided to put its head down and bully their way forward.

As Mr. Goodman astutely points out, the WUI vegetation management requirements of the proposed ordinance are way over the top.

As described in his letter,

“The Proposed Ordinance would require residents to remove all vegetation, except for succulents, within the first 3 feet surrounding any residential or commercial structure and create hardscape malarial in its place, and remove all species of junipers, bamboo, acacia and Italian cypress from within I 0 feet from property lines and driveways and within 30 feet of residential or commercial buildings, among other requirements.”

“If adopted, the Ordinance would be one or the most extreme, aggressive amendments to a municipal Fire Code of its kind in California - if not arguably the most extreme and aggressive in the United States. Such extreme, aggressive and sweeping eradication of critical habitat and essentially "taking" of personal property from private landowners without due process should not be hastily rushed through an arbitrary approval process primarily driven by "shock, awe and fear" without the proper scientific and legal evaluations undoubtedly required with such a sweeping proposal.

To appreciate the magnitude of this proposal, let’s look at the area impacted. This is a map of the homes and land parcels that are included in the Wildland Urban Interface, the “WUI,” which would be impacted by the ordinance. 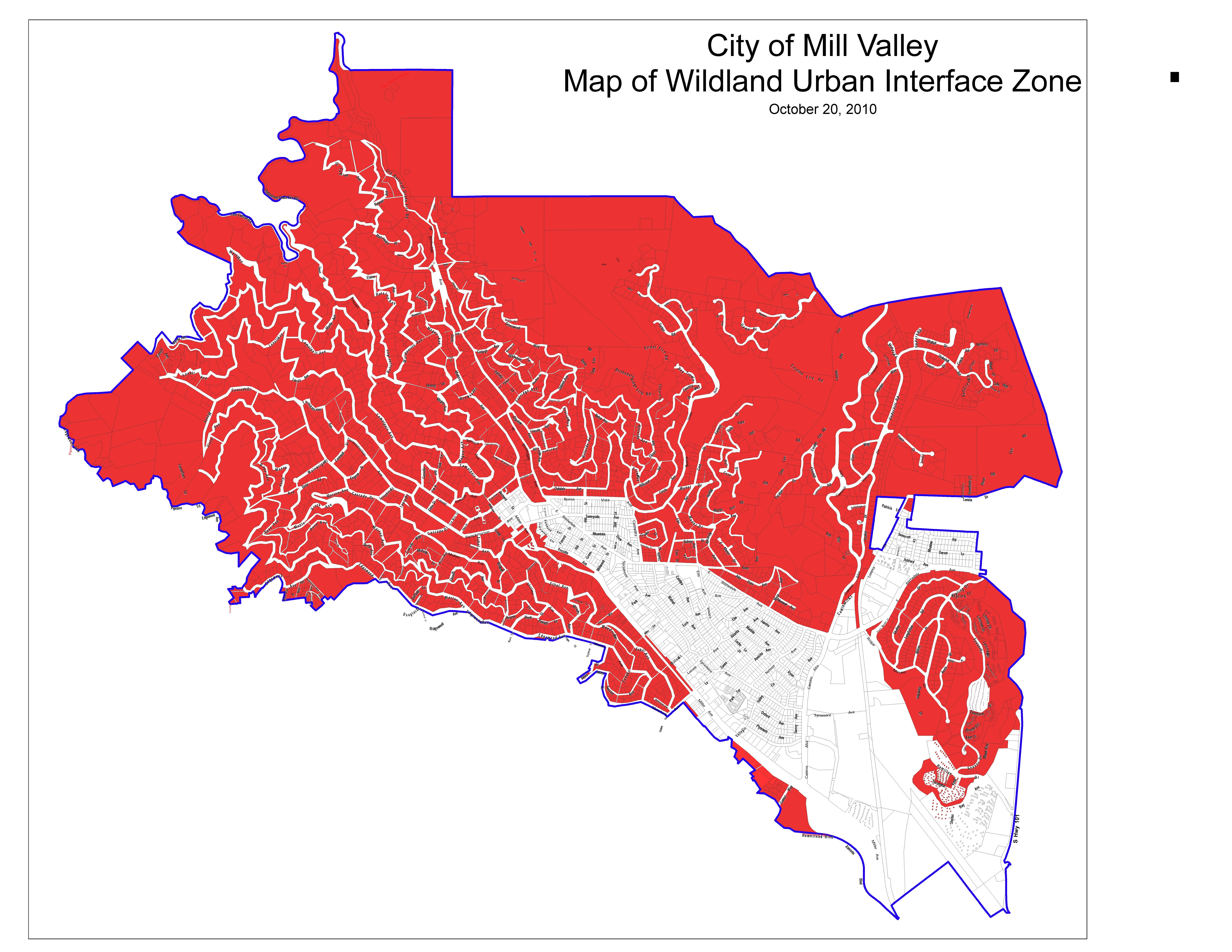 Clearly, the ordinance will impact the vast majority of homes in the City of Mill Valley.

According to the City’s most recent inventory of homes in the WUI (See the 11-15-10 Mill Valley WUI Parcels Inventory), there are approximately 3,600 homes in the WUI. Doing a thumbnail analysis, puts the proposal into more understandable perspective.

The average circumference of the average home in these areas (which tend to have a larger footprint than homes in the “flats” of Sycamore Park), including their attached garages, out buildings, decks and other things defined as “structures” in the ordinance, is probably about 250 linear feet. Take that length and multiply it by the required 3 foot width and you get a gross area of 750 square feet of land, per home. Now multiply 750 square feet by 3,600 homes and you get about 2.7 million square feet of land stripped bare.

That is equal to 62 acres of land that will be required to be completely denuded and stripped of all vegetation and life -- not even short natural grasses are allowed.

Then, to ensure the complete destruction of the fragile microbiology and carbon sequestration capabilities of the vegetation and soils, homeowners will be required to pave it over with impermeable gravel or other hardscape! A rough calculation of adding a few inches of gravel cover the 3 foot buffer area around all those homes would require hauling in 25,000 cubic yards of gravel.

Viewed as one project, this would constitute the largest, single residential land reconstruction project in the history of Mill Valley. It would require more off-haul of vegetation and more import and earth-moving than all the development in Mill Valley over the past 10 years, combined.

Okay, some will argue that not everyone would go out and purchase gravel to address the ordinance requirements. But, let me put it this way.

If a private developer came to the City and said they wanted to clear cut and hardscape 62 acres of Mt. Tam, and the City should exempt their project from CEQA because there is “no possibility” that it will have a “significant impact on the environment,” they would be tarred and feathered and pilloried in Lytton Square.

Doesn’t anyone at our City know anything about science or ecology or the complex symbiosis between animals, plants, microbes, fungi, algae, protozoa, earthworms, insects and small vertebrates that all help store, recycle, deliver, and break down soil nutrients and increase water retention? Do they have any concept of the relationship between healthy soils and longevity of our entire watershed ecosystem and all its species, or how fundamentally destructive their scorched earth approach will be?

A Middle School student could teach them about that.

The importance of maintaining natural ground cover goes far beyond its aesthetic value. In fact, how it looks is probably the least valuable thing about it, ecologically. The term “habitat” includes everything that is needed for every life-form, from nitrogen-fixing bacteria to nesting and foraging wildlife, to the protection of our endangered species in our riparian systems. Gravel and hardscape are the death of all of that and will be particularly impactful in our hyper-sensitive canyon micro-climates, upon which so much of our unique flora and fauna depend.

To deny the environmental impacts of the proposed ordinance is beyond audacious. And, if implemented, how does the City propose that homeowners will be able to maintain these “vegetation dead zones” and keep weeds and plants from inevitably growing in new gravel pathways? By using Roundup or other toxic herbicides? What about the impacts of that?

It's beyond question that an ordinance of this magnitude will require a full Environmental Impact Report (EIR) to satisfy the requirements of CEQA.

Air quality -- Assessment of the impacts of the loss of 02 production by plants and the resultant decrease in carbon sequestration, as it relates to overall un-sequestered CO2 emissions, and increases in dust and particulate matter in the air.

Biological resources – Assessment of the impacts of the loss of habitat, including impacts on microbial life, and the loss of species and endangered species of plants, insects, fish, and animals, particularly in riparian systems.

Geology and soils – Assessment of the impacts of the loss and degradation of life-supporting top soils, and increases in water and wind erosion.

Hydrology and water quality – Assessment of the impacts of increased impermeable surfaces and runoff, including but not limited to degradation of groundwater quality and increased pollution, and the loss of natural water filtration, on plants and animals and the health of the entire ecosystem.

Comprehensive and cumulative impacts – The required assessment must consider how these various impacts are inter-related. For example, loss of habitat, soil’s quality, and hydrological effects can potentially decimate the ecology of our lower canyons and riparian ecosystems, impacting everything from water fowl to endangered salmon. Or, since hardscape dries out and degrades the health of impacted soils and the loss of planting increases water runoff, the results can be increased soils erosion, storm water management impacts, flooding, hillside instability, and landslides.

All things considered, it’s simply preposterous for the City to claim these and other impacts do not require an EIR.