The following is Part II about what the SMART Board is not telling the public. For Part I of the series, please click here.

What SMART is not telling the public:

Figure 1 plots SMART’s monthly ridership that SMART submits to the FTA, which is published on-line in the “National Transit Database” or NTD. 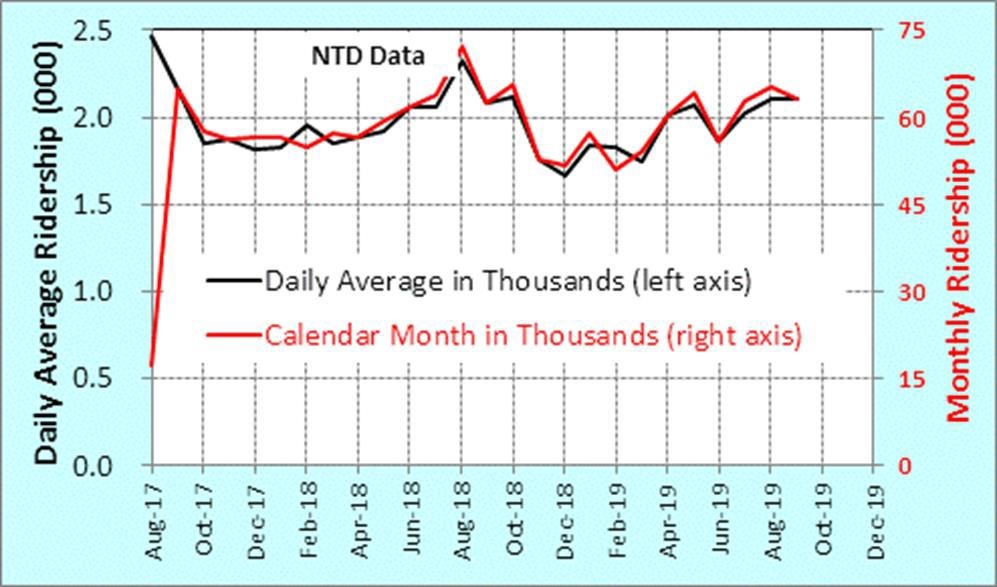 2) SMART is the most inefficient (from a cost perspective) transit system in the Bay Area. This is calculated as the taxpayer subsidy-per rider which is over $50.

Golden Gate Transit buses, which are one of the more expensive transits, cost the taxpayer $17 per rider. This is based on published data as demonstrated in Figure 3, below. 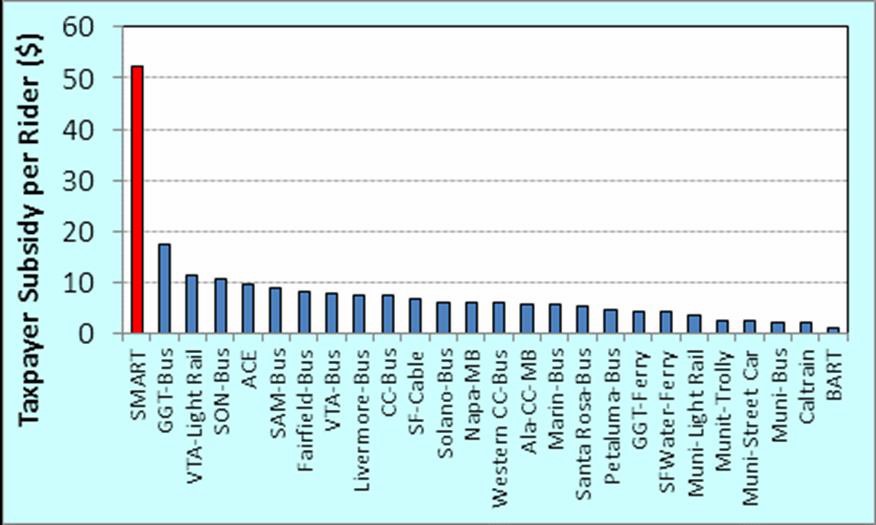 3) SMART is increasing traffic congestion in downtown San Rafael, which is about to made far worse once the trains begin operations across 2nd and 3rd streets. The most recent quote of SMART’s GM (Farhad Mansourian) in the Marin IJ (Sunday December 1) says,

But SMART’s general manager, Farhad Mansourian, said that drivers complaining about traffic in San Rafael are wrongly blaming the train. “The notion that we are affecting congestion in downtown San Rafael is false,” he said. “It’s just that simple. It’s been congested since before SMART was there.”

4) The "connectivity to the ferry" has been touted by SMART as a great enhancement. In fact, Golden Gate Transit is eliminating the 31 route once the train begins service. Fewer people are expected to use it than are currently taking the bus. Why? Because the buses depart downtown San Rafael pulsed to meet the ferry departures. Commuters get off the bus in front of the ferry building.

But the train will take longer. It will leave passengers a 7-10 minute walk from the ferry building and trains cannot be scheduled to meet the ferries. Supposedly, Farhad will publish the new rail schedules today.

Figure 4 compares the connect times for arriving and departing ferries to the SMART train.

5 ) SMART has way overestimated its sales tax revenue potential over the course of the next 39 years (2020 - 2059). They are forecasting from 2029 – 2059 $2.4 billion in sales tax revenues. The SMART Board decided to make it up future revenues just as they did in 2008. They have overestimated their revenue potential by hundreds of millions of dollars.

What does this mean? They are in real financial trouble and their future operations will be squeezed. For this rail system, extensions are a financial loser because they generate more cost than fare revenues. Ridership is that low. The Windsor extension now estimated to cost $65 million is an unbelievably uneconomic extension.

6) What is this election really about? In 2012, they issued unbelievably risky bonds that contained a rising debt service payment schedule. Those payments are now consuming 42% of the sales tax revenues. They want to refi the bonds. But here's the catch: they can't until calendar year 2022 because the bonds contain call dates and they can’t be refinanced until those dates.

A recession is quite likely before 2023. And when it occurs -- depending on its depth -- they'll be facing major cutbacks. Major cutbacks. And there's nothing in this measure that will prevent those cuts.

8) If you want documentary evidence of how out of control the Board is, just take a look at the first 3 years of financials in the Strategic Plan. The Board adopted a plan that ASSUMES that the agency will be operating in the red for 3 years even with growing sales tax revenues.

This is highly imprudent.

Mike Arnold is a PhD economist, currently lecturing at the Fromm Institute (USF) and in the Osher Life Long Learning Institute (OLLI) at Dominican University and Sonoma State University.