Transportation Authority of Marin’s proposed ½ cent sales tax renewal has attracted considerable opposition owing to its 30 year term. With rapidly evolving technological and societal changes, that’s much further into the future than any congestion management agency can predict.

If TAM gets a 30 year renewal they won’t have to deal with us pesky voters again for a generation. Kids now in the 3rd grade will be nearing 40 before they get to vote on TAM’s priorities.

Those same kids’ safety is now held hostage in a get out the vote power play.

A major part of TAM’s effort to secure support for AA centers around its claims that it will have to fire at the end of this year 22 of the current 88 school crossing guards if AA doesn’t pass. TAM's reason: a 25% rise in the cost of its crossing guard contract. What’s with that?

Now the pro-AA Keep Marin Moving campaign makes the fabricated threat that the crossing guard program would be eliminated altogether if AA isn’t passed. The Keep Marin Moving campaign is mostly funded by the companies that feed at TAM’s trough: those providing labor, engineering, construction, and consulting for major public infrastructure projects..... as well as crossing guard contractor.

Here’s what the pro-AA campaign chose to post at the very top of their YES on AA Keep Marin Moving Facebook page: 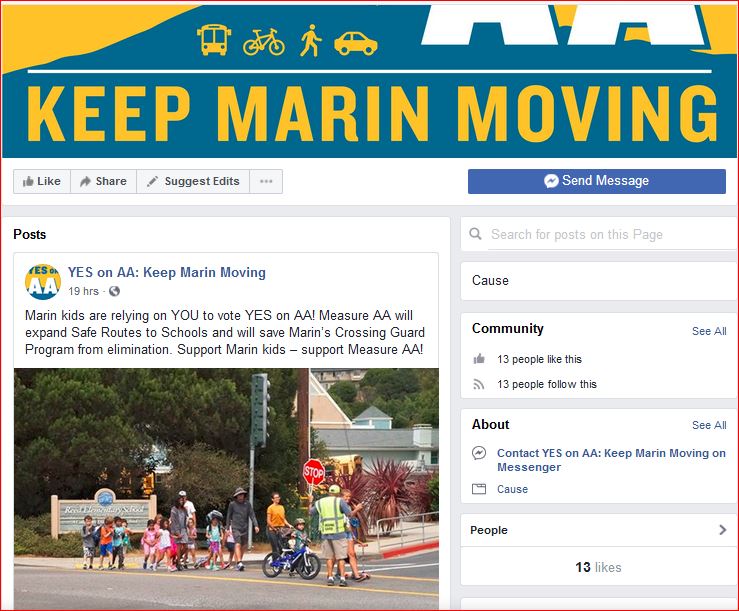 I posted on their Facebook page the reply below. 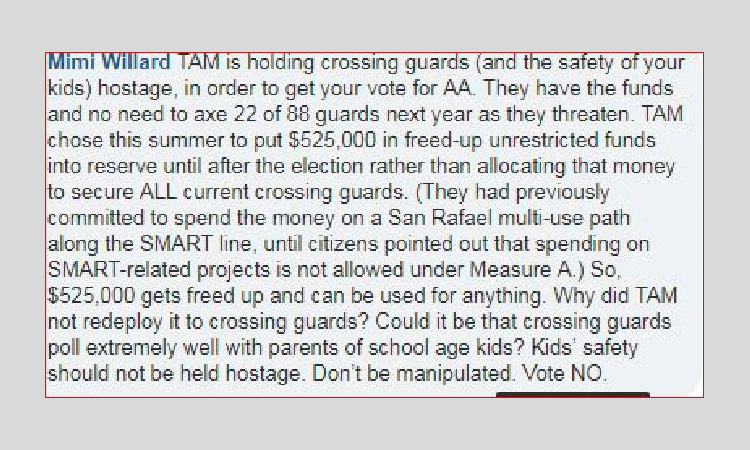 TAM minutes and emails substantiate every one of the statements in my above post.

My factually accurate post was promptly removed by the Keep Marin Moving Facebook page administrator. Three times. The same thing happened to several other people who posted on the pro-AA Facebook page. All of them were then blocked from viewing the page. I was not immediately blocked so was able to get before and after screenshots of my disappearing posts.

Who the heck hovers over an obscure pro-AA website instantly deleting inconvenient facts?

Folks who have a lot of money at stake.

Parties who have or seek contracts with TAM have contributed over two-thirds of the nearly $100,000 raised for the pro-AA campaign. By the time the campaign's final financials are disclosed, that figure will certainly be higher, maybe much higher.

In fact, $7,500 so far comes from All City Management Services, the Santa Fe Springs based crossing guard company.

Don’t be manipulated by the supposed crossing guard crisis. TAM can allocate unrestricted funds in hand to sustain the full number of crossing guards for another year or two. During that time, TAM should come up with a 10 year sales tax measure that’s a coherent plan rather than a wish list designed to please (or terrify) each interest group and jurisdiction.

Vote NO on thirty-year AA.