Glancing at today’s newspapers, a reader might easily believe the only important topics are our erstwhile president and “What’s he gone and done now?”. But for those of us leading busy lives that would be a grand mistake, because we’ve taken our eye off the ball. The big changes are not only happening in Washington D.C., but also in Sacramento - and soon, right here in our own neighborhoods.

The March of the YIMBYs

Over the last few years, a new movement has formed in San Francisco - a movement made up of 20 and 30 somethings who prefer the urban environment. This movement detests middle class suburbia for its “inefficient” use of land and transportation, and for what it deems to be implicit exclusion of races and those on lower incomes through zoning decisions that maintain high property values. And that would be fine, but they not only have Sacramento’s ear, they’ve lobbied heavily for significant change.

The movement was born out of the San Francisco chapter of the Bay Area Renters Federation or SF BARF. SF BARF renamed itself SF YIMBY - that’s “Yes in My Backyard”. Their goal sounds worthy. The Bay Area, especially Silicon Valley and San Francisco, has rapidly grown the number of jobs in the region, but this thirst for fresh troops for the technology sector has far outpaced the region’s housing supply. The result, we’re all too aware of sky high costs of living and traffic congestion.

The YIMBYs want to build as much housing as possible, to address the housing crisis and their number one enemy is the suburbs. They look to the many perceived obstacles that have inhibited housing development there. With a slew of legislation just passed in September 2017, they have bulldozed and dispensed with many of these obstacles, such as:

I met with a YIMBY for coffee - a Silicon Valley engineer in his late 20s. He was smart, informed and engaged. His concern was that the high cost of housing was hindering people from getting on the house ownership ladder in the Bay Area. He himself had benefited from an IPO stock offering and had no problem affording a home, but he wanted to demonstrate his support for many other workers without that advantage.

YIMBYs have become a powerful force in the Bay Area region. They have become highly connected to the young tech elite raising large sums in support - $100,000 from Jeremy Stoppelman, the founder of Yelp, and more from Dustin Moskovitz, a founder of Facebook. They now hold an annual conference called “Yimbytown”. The SF YIMBY organization now has a full time, paid staff pushing their agenda.

The Triumvirate of State Senate Bills

Senate Bill 2 charges real estate documentation recording fees of $75 per document, with the funds to be used to pay for affordable housing development;

Senate Bill 3 proposes to raise $4 billion through the sale of state bonds to fund affordable housing development; and

Putting Development on the Fast Track

Typically, it takes 30 days or more for a city to identify omissions in development applications, and months and sometimes years to process and approve them. However, Senate Bill 35 puts review on the fast track, so not only review, but also approval must be given to qualifying proposals:

Put another way, if a city does not grant approval within these timelines, they open themselves up to litigation, not just from the developer but from any interested third party (i.e., housing advocacy groups). Successful plaintiffs are also entitled to collect legal fees and costs.

Today, California’s cities and counties typically have a planning commission and a design review board. Together with their locally elected councils and supervisors they review applications and ensure architectural design conforms to local norms and codes.

Senate Bill 35 removes this local review process to ensure that developments will not be held up for long periods, while local boards apply subjective requirements. The new bill directs that only previously documented, objective requirements can be used. Few local jurisdictions in California have such documented standards in place - none in Marin do. To do so would be a sizable undertaking requiring diverting local planning teams and engaging in public outreach.

Senate Bill 35 will go into effect on January 1st 2018. Local jurisdictions now have less than 90 days to complete this process or developers will potentially be able to bypass architectural and design review, and many of the other impacts noted above.

The Irony - San Francisco, Oakland and San Jose May Be Unaffected

Certainly, a major reason for the housing shortage in the SF Bay Area has been the increase in tech jobs primarily in major cities. However, San Francisco, Oakland and San Jose may all easily meet their required permitting quotas to build, while locations such as Marin will not, simply because land is so scarce, infrastructure is inadequate, water resources are very limited, building costs are high and few developments there prove to be financially feasible.

Who is paying for All This Altruism? The Middle Class, of Course

Politicians at local and state levels have become adept at presenting legislation with highly attractive (who could possibly oppose them) names, which conceal steep increases in taxes and fees, the burdens of which fall mainly on the middle class.

For instance, who could possibly oppose SB2, “The Building Homes and Jobs Act,” an innocuous sounding $75 “documentation fee” increase. Opponents sent a letter to State legislators putting their own spin on it, but here are the fee increases without any spin:

Then there’s Senate Bill 3, the “Veterans and Affordable Housing Bond Act of 2018.” This bill was sponsored by Marin County state senator, Mike McGuire, who claims on his Facebook page that it will “build a stronger middle class”. However, this bill potentially saddles state taxpayers with interest and repayment of a $4 billion bond. 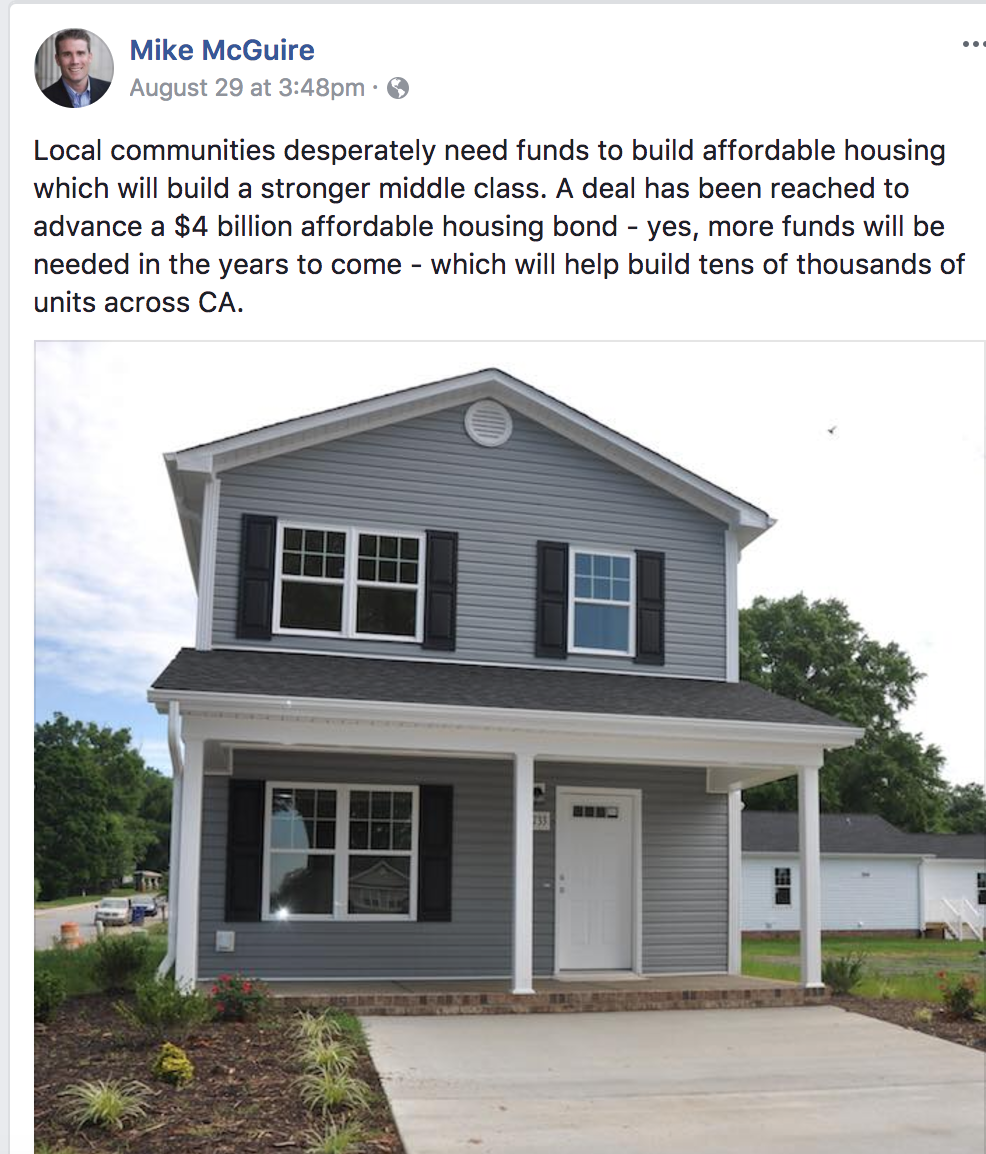 Together, Senate Bills 2 and 3 are estimated to raise $3.9 billion annually to assist developers in building more housing (which only includes 10% affordable units). According to a non-partisan group, the state would actually need $15 billion annually to truly address the housing crisis and even that calculation is questionable.

What is really happening is that: