“The recommendation was rejected, and the county has continued to fail to create sufficient affordable and workforce housing for Marin’s low to median income earners.” Summary, Grand Jury Report on Housing, Page 1

The fundamental error of the Grand Jury report on housing is its confusion about who is responsible for building and providing housing. These are two different processes. In general, investors provide funding for housing to be built, this is sold to individuals or property management companies (like REITS) or today hedge or private equity funds like Blackstone that recently bought housing from insurer AIG. It is not the role of municipalities and counties to “create housing.” They can regulate what is built though the state is eliminating most of the traditional mechanisms for this. The second part of the housing equation is “providing” housing.

Here an owner or agent rents out a unit if the market is suitable for making a profit. How a unit is rented is essential. Owners can hold on to a unit off the market as simply an investment to be sold in the future as any asset. Or, an owner can rent on the open market or use an agency like Airbnb. The use of units for profit depends on the strategy of the investor and providing affordable housing is not a profitable investment when compared to all the problems of tax, renter default, damage, maintenance, and insurance.

The Grand Jury report lacks any realistic focus on the problems of investors or owners or the complexity of renting.

Elected officials in governments are certainly elected by voters to oversee the administration of their jurisdictions, but with the exception of those with housing development corporations which are generally instituted by a plebiscite, creating housing is not a specific enabled power. Municipalities and counties can affect the outcome of building through policy but they cannot demand private builders produce more housing or less or require it be built as affordable. Until Mr. Weiner began meddling with the State Constitution, local governments could institute policies to promote building and attempt to maintain some degree of housing balance in local needs.

Still, builders and investors will do what will produce profits no matter what local governments or Mr. Weiner want. This is a capitalist country despite Mr. Weiner’s belief that he can govern by fiat.

The Grand Jury notes that the State of California’s legislation to force housing on local communities via general plan elements has failed. They apparently are ignorant that such general plans, most a result of ideological perspectives on how people should live, were begun at the beginning of the last century. Herbert J. Gans, a major contributor to theories of planning and methods in city and town development, produced a comprehensive overview of general plans in 1968. It has remained a classic work on the subject. Mel Scott’s review in 1969 supplements Gans’ work.

As these books note, general plans were forced on most state communities to regulate building and promote building codes that often were a means of instituting certain social programs, often racist and designed to control where and how people lived. The general idea was to create a uniform building and development code that eventually became zoning laws. These were never effective in increasing affordable housing but were powerful tools to control certain low-income or discriminated against citizens.

Since the 1960s, these plans had a dramatic effect on towns and cities. One can see why as the 1950s saw a tremendous building effort, mostly single-family homes, but also large apartment housing and government-owned and supported building what came to be called “housing projects’ but were designed to be low-cost and low maintenance structures. While the most affordable units were single room occupancy (SROs) buildings, these suffered under “slum clearance” efforts which were really “negro removal” programs.

It is interesting to compare the news media campaigns of the post-WWII period against “slums” to those of the turn of the century during the Progressive Periods’ crusade against slums that were often thinly disguised attacks on immigrants, especially from Southern and Eastern Europe (see Dorsett, 1968).

One wonders if all this effort was made to produce housing, why did it fail? Resistance among builders and communities to building standards was one problem, but not the greatest. The main problem was sociological and psychological as the Levitt brothers found when they like other builders attempted to create new cities.

Marketing housing units and the cost of producing them to city dwellers often clashed with what bankers, investors, and people had in mind. The former for profit and the latter for idealized living associated with wealth and mobility.

Jane Jacobs (1961) produced a quite effective analysis of this process. She mainly blames planning ideology but also shows how complex the problem is. The ultimate effect, as Paul Lewis (2003) has shown in his analysis of the effects of housing elements on affordability, is that little affordable housing has been built.

In paragraph two of the Gand Jury report, they note that “increasing the housing stock is a goal widely supported by elected officials."

Unfortunately most cities and towns in Marin and the County have no accurate analysis of their housing stock, nor of a housing inventory. Without a comprehensive knowledge of what you have, you cannot plan for the future or address current needs. California now has an estimated 2.93 people for every occupied housing unit behind only Utah (3.09) and Hawaii (2.93) (McGee, et al., 2021). However, more important is how that supply is being used and is why the housing inventory metric is so important.

The Federal Reserve Economic Data report (https://fred.stlouisfed.org/series/ACTLISCOUCA#) shows that housing inventory use has been dropping since a peak in 2018 to a low in 2020.

Some commentators have argued that the current lows reflect the Covid-19 effect, but the drop began much earlier and is a consequence of changing investment as more LLCs and hedge funds got into the business of buying up rental and single family home properties (see Heathecote, 2022 on the example of “Evangelist” megadealer David Greene related to this). 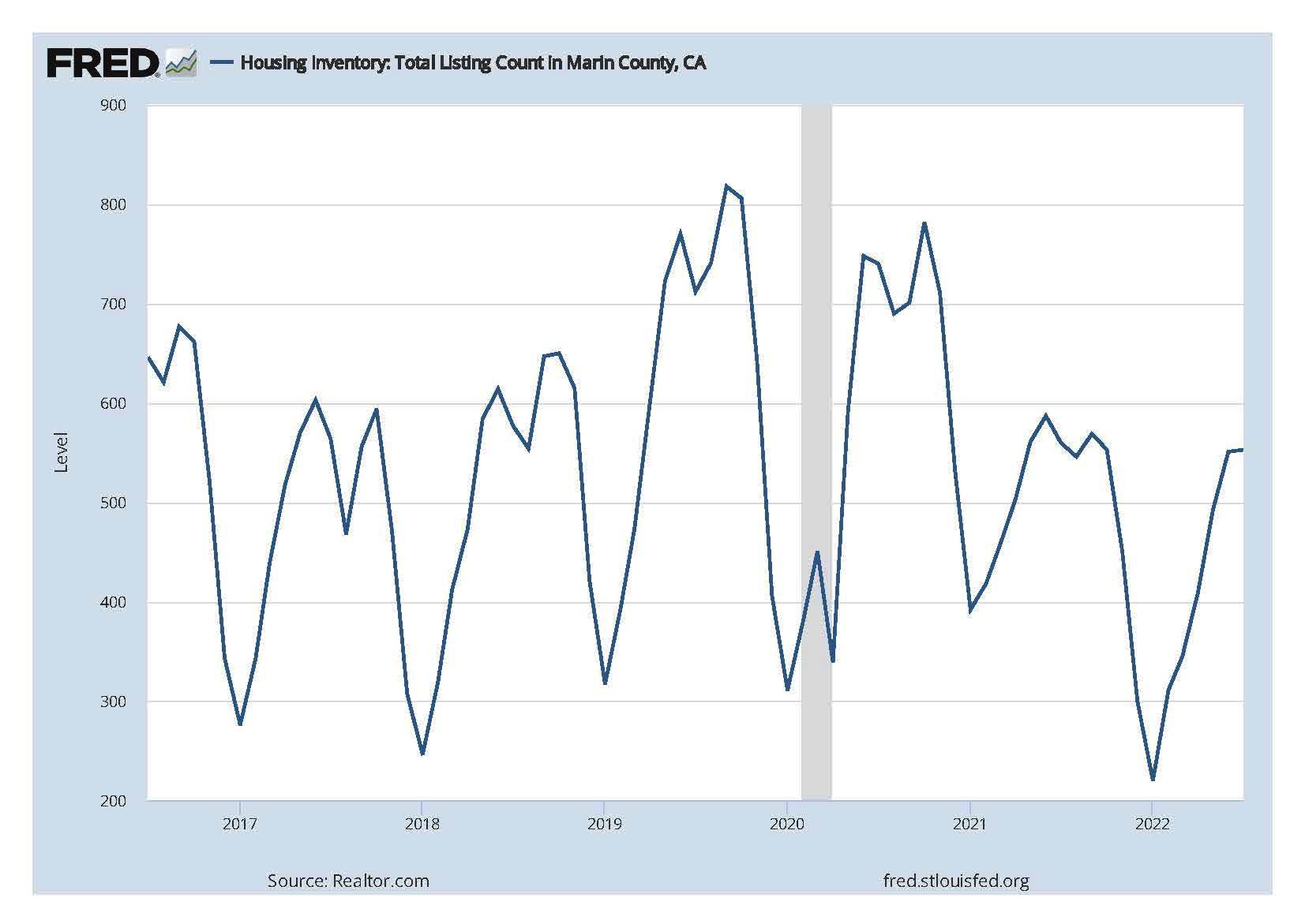 The FRED graph for Marin also shows dramatic swings, and partly this is due to the fact the data is simply downloaded from the Census without any analysis. It is still useful, but I have found that such wide variation is due to not simply seasonal changes as is often argued, but economic trends in investment as people change jobs, investors pull properties from the market etc.

But this belies the significant difference between the general inventory chart for California and that for Marin. It seems to indicate that owners and investors are manipulating the market to a very significant degree, perhaps this reflects local wealth and also agencies like Airbnb.

What is to be Done?

The Grand Jury report trumpets SB 35, believing the hype that it will give the State more power to control housing. Again, the local governments cannot produce the housing and if the State wanted that they would fund local housing development corporations or fund its own process and entities for such construction and ownership.

Why would builders and investors want to flood the market with housing units which would only drive down the prices and rentals?

The State cannot rely on private enterprise to produce affordable housing and the building industry does all it can to lobby to prevent it. On page 5 of the Grand Jury report they make a statement that shows how ignorant they are of how things work:

“The state recently allocated $7 billion for housing-related programs. There are other sources of funds for affordable housing, such as low-cost loans from financial institutions that are pass-throughs from the Federal Home Loan Bank of San Francisco’s Community Investment Fund.”

Not only is $7 billion a small amount, but it is not earmarked for building, nor is the supposed low-cost fund pie available at any amount. In both cases, limits have been imposed by the industry to make sure that no substantial effect will result.

The Grand Jury suggests that a county-wide housing coordinator be hired, but this will do little. They also want a Joint Powers Agency set up to create housing, but this will fail unless it is a housing development corporation. It can lobby, but otherwise can have little effect but fund studies and hold meetings.

Japan as an Example

Why does Japan have the most affordable housing of a developed country and the most stable costs (rents, etc.)? Hugh Cox (2022) finds that it is due to how Japanese governments have shaped the building industry and housing requirements. Paul Boyce (2021) and Jiro Yoshida (2021) looked at the problem of land scarcity and high building volumes to explain this result.

The Japanese have required very distinctive leasing and use of construction on land to constrain speculation. Even a luxury housing project is required to have rentals. This eliminates the disjunction between the demands of the rich for services and the lack of affordable housing for the workers.

In California, we can only suggest some percentage of the housing be affordable, yet not for those doing the local work. An interesting article on this focuses on the founder/leader of the Residential Builders Association in San Francisco and his ability to use influence to block affordability (Anon, 2000).

The other general factor that makes Japan a renter and owner paradise is the small size and construction methods. River Davis (2019) analyzed the Japanese housing market and found small size as the single most important factor. See also Charles Smith on size and Japan.