The marketing campaign for Marin Clean Energy (MCE) has always been that it would deliver “green” energy and do it cheaper than PG&E. However, not only has much of its delivered energy not been green or clean, but its prices are higher than PG&E’s. Worse still, according to local energy expert Jim Phelps,

“MCE is off-loading losses onto ratepayers, much of its “clean” energy isn’t, and were it not for a large and timely infusion of free energy from PG&E the agency might be out of business.”

“MCE has been deceiving its consumers for years, by rebranding dirty power as “clean energy. Claims that MCE’s energy is superior and justifies its premium should be tempered to account for back-office accounting schemes where MCE continues to charge for energy products that are not as represented. For example, MCE advertises its Local Sol customers receive 100% solar power. However, MCE fails to disclose Local Sol’s actual greenhouse gas emissions from behind-the-scenes deliveries of fossil-fired power, which occurs during night hours or bad weather when Local Sol photovoltaic panels do not operate at required power output.”

These kinds of deceptive practices were largely responsible for California’s AB 1110 overhaul of energy reporting.

As Phelps explains it, MCE’s current problems are rooted in the millions of dollars of long-term, renewable energy contracts it executed before COVID-19 collapsed energy prices in the western US. Today’s market prices for renewable energy are roughly half the cost of many of MCE’s contract prices. Natural gas prices have also declined, adding to MCE’s problems. According to The Wall Street Journal (August 1-2, 2020 print edition) oil & gas giants are posting record losses.

When renewable energy and natural gas prices fall, the exit fees that MCE customers have to pay to PG&E increase. These “exit fees,” known as the “Power Charge Indifference Adjustment” cost (PCIA), cover PG&E for any losses due to long-term energy contracts executed on behalf of PG&Es ratepayers long before Community Choice Aggregators (CCAs) like MCE were created.

The PCIA exit fee was created to make PG&E--and California’s other investor-owned utilities--whole following the automatic switching of consumer billing accounts to CCAs like MCE. Without these exit fees, the investor-owned energy companies could be left holding the bag. But, when energy prices fall, the PCIA exit fees tend to increase on your energy bill. And, MCE has been doing its best to not let their customers know this.

Collectively, MCE’s Residential ratepayers are hit with $12.25 million in costs that MCE shifts off of its books. 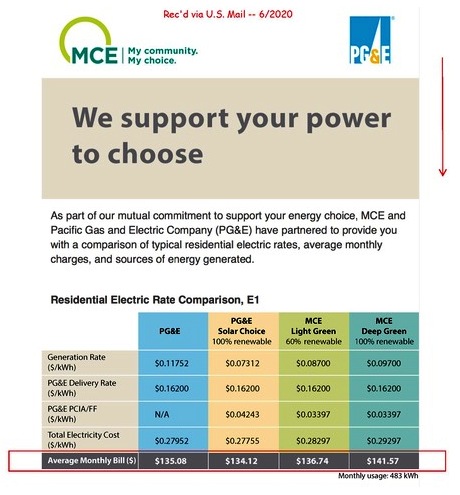 The truth is it’s somewhat amazing that MCE has been able to keep this game going for as long as they have, considering how the agency is managed.

Normally, higher prices for electricity would be a death knell for a small agency like MCE. So, how the heck are they doing this? This will be explained in detail, in an upcoming article by Jim Phelps.

But, aside from accounting tricks and other revenue shenanigans that MCE has built its “business model” on (and I use that term loosely), their operations have been enabled by MCE’s technically ignorant Board of Directors, comprised of local government neophytes, which insulates MCE staff from any real accountability.

MCE Executive Director, Dawn Weisz, a former County of Marin County junior employee who commands a $360,000 annual salary (plus COLA) to manage a small staff, lacks capability to conduct MCE’s back-office requirements on her own, which includes setting MCE’s energy prices. Weisz outsources the duties to a small consulting firm called Pacific Energy Advisors (PEA), to the tune of more than $1.025 million per year.

By comparison, Monterey Bay Community Power – a similarly-sized CCA under the leadership of a competent electricity professional (earning a similar salary to Weisz) – handles almost all the work internally and limits PEA to a not-to-exceed $50,000 annual contract for miscellaneous duties. Not surprisingly, Monterey’s electricity prices are equal to, or lower, than PG&E’s.

In the case of MCE, its higher costs than PG&E are being paid by MCE ratepayers.

We should note that PEA helped MCE with its 2010 business launch and remain in continual conflict-of-interest with each new contract and payment from MCE.

Perhaps the only thing that is keeping MCE financially solvent is that MCE plans to enjoy multi-year, free distributions of carbon-free energy (large hydro and nuclear) from PG&E, pursuant to on-going PCIA negotiations at the California Public Utilities Commission (CPUC).MCE will be getting and using approximately $35 million of large hydro energy over each of the next six years; roughly $210 million of value—power that MCE has disavowed as not being “green” from its first day of marketing its brand.

According to Phelps, MCE is applying that $210 million directly to its own ledger, as revenues, even though that PCIA money belongs to ratepayers, not MCE.

In other words, MCE is considering funneling consumers’ money into its accounts, commingling those funds with its own, and then spending someone else’s money as it sees fit. If you departed from MCE last year and returned to PG&E service, wouldn’t you like your money returned? Remember, the PCIA is a charge you pay direct to PG&E, not MCE.

So, what is MCE planning to do with your money? According to Phelps, they’re keeping it for themselves. Otherwise, the agency should be passing through prices that are now lower than PG&E’s, not higher; MCE off-loads its higher costs onto consumers.

MCE originally committed to pay customer’s PCIA charges (at the time referred to by MCE as an “Energy Credit”), then later on, MCE swapped that commitment in exchange for a “14% rate reduction” for MCE ratepayers that failed to materialize.

“If MCE had honored its word and actually paid everyone’s on-going monthly PCIA charges as it originally committed prior to its 2010 business launch, then MCE would have a legitimate claim to “your” PCIA cash value today. But that is not close to what Dawn Weisz and her consultant devised. Off-loading MCE’s “Energy Credit” commitment onto its ratepayers for a price reduction that never materialized was and is criminal, especially for older consumers who did not understand why their electricity bills increased after Weisz & Company sold MCE as lower prices and local employment.”

But, it gets worse.

“The “large hydro” power that MCE gets from PG&E constitutes a majority of MCE’s “green” energy claims since its 2010 business launch. This contradicts the commitment MCE’s then Board Member, Charles McGlashan, made that MCE would limit large hydro to its “early contract” (five-years) with Shell Energy, because “large hydro projects are habitat killers.”

So much for MCE’s environmental commitments.

MCE is playing a rigged game. Their revenues continue to swell, not because of years of market performance, but because waves of new ratepayers are automatically swept into MCE every time a new municipality MCE’s Joint Powers Authority. The new ratepayer revenues plaster over the MCE’s financial weaknesses. The free energy deliveries from PG&E, discussed above, are only prolonging MCE’s day of reckoning.

“Were it not for PG&E’s free energy distributions, MCE would be in serious financial trouble if the energy markets remain depressed. But, even with a heavy thumb on the scale, MCE is unable or more aptly, unwilling, to underprice PG&E, as promised to its ratepayers. “

Opt Out (while it’s inexpensive to do so)

According to MCE, residential customers electing to “Opt Out” of MCE will incur a one-time $5 charge and commercial accounts will incur a $25 charge. A word to the wise: these fees will increase dramatically as MCE comes to terms with its evolving economics and its ratepayers see the handwriting on the wall and depart in droves.

Whether you like PG&E or hate PG&E, they are the only thing stopping MCE’s prices from skyrocketing. And, MCE’s Board of Directors lacks the will and knowledge to reign in staff’s inevitable call for a bailout.

Part II of this series, to be written by Jim Phelps, discusses the stealth tax that MCE levies on naïve municipalities, simply by repackaging energy resources from its overall energy portfolio, and MCE’s nuclear play.

This article is based on an interview with Jim Phelps. Jim is an acknowledged energy expert, who writes about electricity issues and CCAs. Before retiring he was a power contractor and utility rate analyst. He consults municipalities who are considering the merits of CCA and the accrued effects on municipal Climate Action Plans. He served as a contributor to the California Energy Commission during its two-year AB 1110 Implementation Rulemaking.