Please Vote "NO" on Measure D

I got involved in the issues surrounding Measure D, because I oppose actions that take away local control of land use decisions. If passed, Measure D would usurp a local community plan by exclusively mandating golf, despite there being no feasible plan for reinstating the old golf course, which was closed by the new owner a year ago.

The new owner is the highly regarded Trust for Public Land ( www.tpl.org ) which for nearly a year has been working with a highly engaged SGV community to continue plans to restore the damaged habitat for endangered coho, and to preserve these beautiful and accessible valley lands for use as a public commons and park for all. 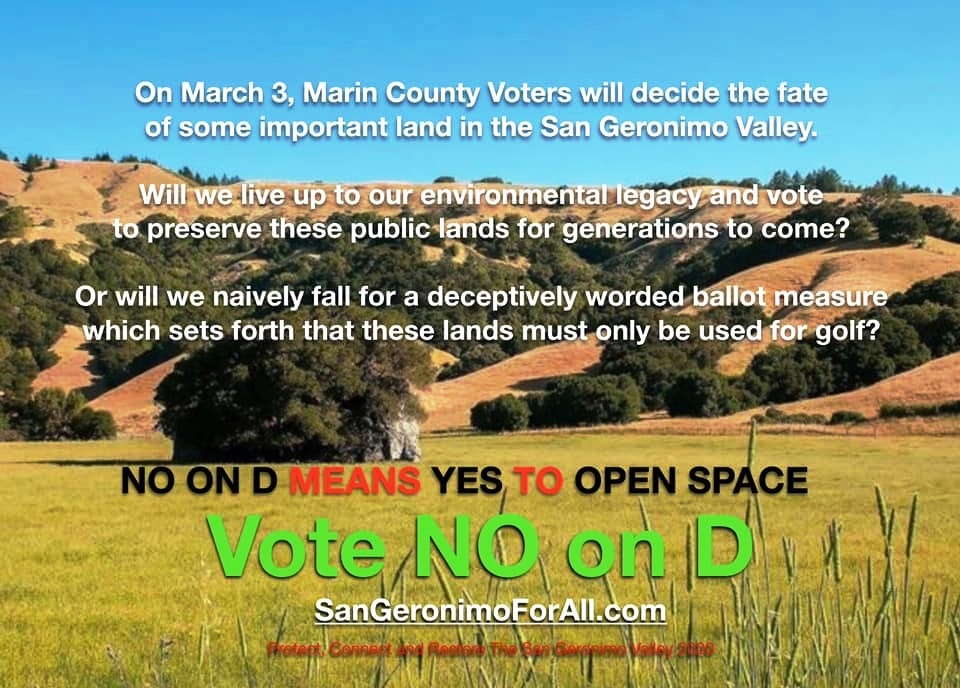 At the former golf course, there were nearly 900 applications of pesticides, herbicides and rodenticide used in its final 22 months. The water use was also unconscionable, especially at a time of heightened fire danger and frequent droughts. Golf is simply not environmentally sustainable on this ecologically critical property.

Golf is declining in popularity and so it was also not economically sustainable, which is why the property was sold. Measure D is led by a disgruntled elite few golfers who managed to trick thousands of residents into signing a petition to “save San Geronimo” when they were instead proposed to demand it be zoned exclusively for golf.

Conversely, NO on MEASURE D is endorsed by virtually every environmental organization in Marin County, and almost all civic leaders in Marin, including Sierra Club, Marin Conservation League, all five county supervisors, and many, many more

If it seems a little crazy that all of Marin is being asked to determine the future of an individual community’s historically public lands, that's because it is. D would set a dangerous precedent. To make sure this sort of unfunded private interest land grab doesn’t happen in your community, please vote against Measure D.

If D passes, it will not bring back golf. It will merely eliminate everything else, and begin an expensive legal battle that could go on for years. Only the lawyers will win.

If D is defeated, it means open space forever, for all people and for nature.

The Trust for Public Land has publicly committed to this. TPL has help hundreds of communities protect public land from development and predatory zoning. They will do the same for San Geronimo.

In this day of environmental rollbacks on every front, never has it been more important for Marin to live up to its environmental legacy and block this patently absurd golf-only zoning. All Marin voters, it is up to you (even though it really shouldn’t be.)

PLEASE VOTE NO ON MEASURE D.